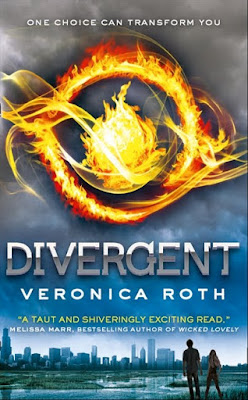 Received from the Publisher
From the BLURB:
In Beatrice Prior′s dystopian Chicago world, society is divided into five factions, each dedicated to the cultivation of a particular virtue-Candor (the honest), Abnegation (the selfless), Dauntless (the brave), Amity (the peaceful), and Erudite (the intelligent). On an appointed day of every year, all sixteen-year-olds must select the faction to which they will devote the rest of their lives. For Beatrice, the decision is between staying with her family and being who she really is-she can′t have both. So she makes a choice that surprises everyone, including herself.
During the highly competitive initiation that follows, Beatrice renames herself Tris and struggles alongside her fellow initiates to live out the choice they have made. Together, they must undergo extreme physical tests of endurance and intense psychological simulations, some with devastating consequences. As initiation transforms them all, Tris must determine who her friends really are-and where, exactly, a romance with a sometimes-fascinating, sometimes-exasperating boy fits into the life she′s chosen.
But Tris also has a secret: one she′s kept hidden from everyone, because she′s been warned it can mean death. And as she discovers unrest and growing conflict that threaten to unravel her seemingly perfect society, she also learns that her secret might be what helps her save those she loves . . . or it might be what destroys her.
‘Divergent’ is the first book in a new dystopian young adult series by debut author, Veronica Roth.
Dystopia is the new vampirism for YA books. Just about everything has been explored when it comes to the dregs of humanity – from Carrie Ryan’s zombie-ridden landscape, to Ally Condie’s society of matched love and Suzanne Collins’s epic game of survival. But even with all of these diverse and horrifying explorations of human misery, there is still room for new voices in the Dystopian genre. Case and point, Veronica Roth.

Roth has created a world that is divided by extremes. People are sorted and categorized according to their personality traits – honesty, selflessness, bravery, intelligence and harmoniousness. People live in like-minded communities where their traits are amplified and personified in their daily activities and contributions to society (the brave act as police, the honest as government representatives etc). People only get one opportunity to break free of their ‘faction’ by sitting aptitude tests when they are sixteen; these tests determine their core character traits and allow them to change factions if they so wish.
Roth has created a seemingly balanced society in her ‘Divergent’ trilogy. But that’s where Roth’s Dystopia offers something new to the somewhat overworked genre. Her society may seem, on the surface, to work in sync and function perfectly. People are categorized according to their strengths and beliefs – it’s the ultimate segregation, and initially it seems to harmonize society. But as the book progresses, cracks begin to appear. Separation of powers ignites bitter rivalry – allowing one source of government instills envy and suspicion.
We witness this slow breakdown of society through the eyes of a young girl, Beatrice Prior. She was an Abnegation child – one of the selfless who are taught to respect others, wait your turn, give a helping hand and refuse vanity and self-indulgence. She lived a harmonious life, but struggled with selflessness. Beatrice suspected that she would choose a different faction from her Abnegation roots – but it’s not until she sits her aptitude test that the possibilities become endless, literally. Because Beatrice’s tests are inconclusive. She is, potentially, suited to any faction – because she cannot be measured, tested or categorized. She is Divergent – one of the very few people in this society who can beat the aptitude test and manipulate it.
When Beatrice chooses the brave Dauntless – nicknamed ‘hellions’ by her father – she enters into a new world order. Here, selflessness is stamped out – people are encouraged to be reckless and brave, to test their limits and conquer their fears. While assimilating to the Dauntless way of life and struggling with her initiation, Beatrice (newly christened ‘Tris’) realizes how her Abnegation faction is viewed by the other societies. Abnegation is seen as secretive and manipulative. Nobody believes their altruism, and their positions of government make them targets of outlandish conspiracy theories.
Tris must eradicate Abnegation from her blood – because her old faction makes her a target amongst her new Dauntless family;

I open my eyes and for the first time stare openly at my own reflection. My heart rate picks up as I do, like I am breaking the rules and will be scolded for it. It will be difficult to break the habits of thinking Abnegation instilled in me, like tugging a single thread from a complex work of embroidery. But I will find new habits, new thoughts, new rules. I will become something else.

But as the novel progresses, Tris begins to realize that bravery and selflessness can be one and the same ... she starts to wonder if she really does want to lose her past to her future faction.
I did enjoy Roth’s book and am intrigued by the prospect of a trilogy. In some regards Roth is sticking close to the Dystopian norms – mainly in her exploration of a splintering society. But I liked the fact that Roth’s Dystopia world was, initially, working. Yes, people were separated and categorized, but society functioned well. People weren’t forced into their factions – they have the chance to change and reinvent themselves. And to some extent it makes sense to appoint people into positions of power according to their aptitude for the task. What makes Roth’s world Dystopian is the creeping inevitability of humanity . . . people revert to the usual traits – envy, suspicion and a thirst for power. So that society may have the best of intentions, but human beings will always find a way to wreck their own paradise.
This is distilled in Beatrice’s new Dauntless world too. The Dauntless were initially created as a faction of the brave – those who would fight and stand up for others. But in recent times new leadership roles and a changing program have seen the Dauntless become cruel and reckless – less concerned with fighting for what is right, and happier to fight for the hell of it.
I did enjoy ‘Divergent’, but I did find that Roth took a long time to ignite her plot. We learn of Beatrice’s Divergent status early on – and there is a sense of foreboding surrounding the mystery and warnings of her Divergence. But when Beatrice enters into the Dauntless faction the plot meanders and slows, we get lost in Tris’s training and her assimilation to a new society. It’s a good thing that Roth’s world is so interesting, because it takes a long time for her to pull a plot trigger. It’s not until page 187 (of this 487-page book) that a plot trajectory becomes apparent and Tris’s Divergent status propels the story forward;

“Mom, what’s going on?”
“I don’t care what faction you chose,” she says, touching her hands to my cheeks. “I am your mother and I want to keep you safe.”
“Is this because I'm a – ” I start to say, but she presses her hand to my mouth.
“Don’t say that word,” she hisses. “Ever.”

Otherwise you spend the first 186 pages wondering what is happening, where the conflict is and where the plot is going.
I may have been more disgruntled with the slow-going plot if Roth hadn’t also offered up an intriguing romance amidst Tris’s story of self-discovery and splintering society. Tris slowly becomes enamored by one of her Dauntless trainers, Four. Four is fearless and honorable, but Tris’s Abnegation-upbringing means she doesn’t immediately realize her altering feelings for him. Their romance is a slow unfolding, and a fantastic counterpoint to the meticulous politics of the novel.
The Dystopian genre has made its mark on the YA scene with authors like Suzanne Collins and Carrie Ryan. But if you think you’ve read it all when it comes to crumbling society, then think again. Veronica Roth is a compelling new voice in Dystopian literature, and her new YA trilogy is a wonderful installment to the growing genre. Roth’s world is made all the more fascinating and devastating for being seemingly functional – until humanity gets in the way. A romantic balance to this novel of societal intrigue and corruption makes ‘Divergent’ ‘unputdownable’ and I am eager for the next two installments from this impressive debut author.
4.5/5
Posted by Danielle at 2:36 PM