'You'll Be Sorry When I'm Dead' by Marieke Hardy 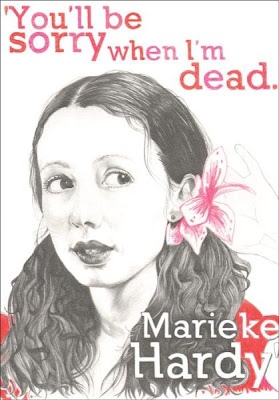 Marieke Hardy comes from a famous family. Her grandfather was Australian communist writer of ‘Power Without Glory’, Frank Hardy. She is the grandniece of comedian Mary Hardy. Both of her parents were writers, producers and editors on many iconic television shows. Marieke Hardy was also a child actor – appearing in ‘Neighbours’ and ‘The Henderson Kids’. Later in life she became a television writer and co-creator. She has also been a radio host, frequent blogger, political commentator, columnist and book reviewer.

My obsession with Marieke Hardy started in 2007 when I first subscribed to the bi-monthly magazine of Australian hipster darlings, Frankie. I read a wonderful article of hers, titled ‘i'm sorry mum’ in which she lamented her rebellious youth and the impact it had on her relationship with her mother; concluding the article with a heartfelt apology and thanking her for having Zen-like patience. It was funnily ribald, concluding on a sweet note of honesty. I cut the article out and stuck it into a sketch-pad.

One day in 2008 I went to visit my grandmother and found her cackling over The Age Greenguide lift-out. Now, to put this into context; my grandmother is Austrian, and when the war started she became a nurse and later joined the people’s land army. She does not guffaw easily. So to see and hear her chortling over the TV guide caused me to raise my eyebrows. As it turned out, my grandma was laughing at the weekly opinion piece ‘Back Chat’, written by Marieke Hardy, in which she either bemoaned reality TV or gushed about her new favourite show or crumpet journo crush. My grandma admitted that she religiously read Marieke Hardy, and delighted in watching her be as funny on TV as she is in print, on the monthly show ‘First Tuesday Book Club’.

Thus, my grandmother and I had something in common: Marieke Hardy. And my sketch-pad started to grow as the ‘Back Chat’ articles were also ripped and stuck inside, along with her ‘Frankie’ gems.

I also went back and revisited the TV show Hardy wrote for, ‘Last Man Standing’, about three Melbournian bachelors living and loving in my hometown (so blokey good it’s a crime the show only ever saw one season!). And I was ridiculously thrilled when her new show ‘Laid’ got rave reviews. I bought the first season on DVD and constantly quote it randomly to friends (“It makes me want to live up a tree.”) Now I stalk her twitter feed for hints about Season 2, which is currently filming.

So when it was announced that Marieke Hardy had signed a multiple-book contract with Allen & Unwin, my grandmother and I were filled to the brim with unmitigated glee. And when an advance copy of ‘You’ll Be Sorry When I’m Dead’ arrived in my hot little hand – I was freakin apoplectic!

Marieke Hardy has left pieces of her soul scattered around Melbourne and the outer suburbs. Her childhood is imbedded in Whitten Oval, West Footscray. Flakes of her talent are scattered on the set and green rooms of Ramsay Street, Erinsborough. The Tote hotel in Collingwood was the final resting place of her hedonistic ‘bubble’ friendship group. A good portion of her heart seems happy to reside in a thin-willed Brunswick apartment. And her naked, painted backside even lives upon the wall of a bar in High Street. In ‘You’ll be Sorry When I’m Dead’ Hardy meticulously gathers these pieces, dissecting and lamenting some, proud as punch of others as she lays out the scattered ends for reader’s perusal and her future prosperity.

Hardy swings like a pendulum – between vulgar and witty, ironic and honest, superficial and then brazenly bare. Like her story about football. The ‘Maroon and Blue’ short begins harmlessly enough, as Hardy explains Victoria’s footy-obsession and her family’s loyalty to the Fitzroy Football Club. She talks about baking chocolate cakes for the footy players, crushing on number 24 and the family ritual of watching and dissecting the game. All fairly blasé stuff, the likes of which would appear in any Melbourne-based memoir worth its salt. But then Hardy unfurls. She reads between her own lines and makes something more and meaningful of the story. In this case, she talks about her rampaging teen years when following the footy was mortifying and she distanced herself from both her parents, and the game. Until, that is, the Fitzroy Football Club was disbanded and left for dead. They played their last match in 1996, and Hardy (then 20) flew interstate to watch the end of an era with her mother; realizing while she sat in the stands that this moment marked the end of something more than just a footy club;

I watched the team shuffle down the race into the rooms, heads lowered, full of shame and disappointment and a dark, confusing grief.
My childhood shuffled off with them. My family rituals shuffled off with them. When they had all left the ground, trainers trudging behind, I heard something click shut in my heart.
At that moment I felt my mother reach across and take my hand.

On the surface, ‘You’ll Be Sorry When I’m Dead’ is simply a collection of very funny stories by a very funny lady who seems to have been designated Melbourne’s pin-up girl. But it’s not until the short story ‘YTT’ that I really started to guess at another purpose of the book. ‘YTT’ is the story of Hardy’s obsession with a Young Talent Time heartthrob, Joey Dee, and how she once met him face-to-face with all the ensuing disaster of a pubescent girl meeting her pubescent idol. This story is triggered by an old friend of Hardy’s asking her to fill in the blanks of a long-ago childhood rift . . . something nearly impossible for Hardy to accomplish, since her mind is gin-soaked and stuttering, increasingly falling into a static ether of forgetfulness. Hardy hilariously explains (with pin-point accuracy) the fear/funny of literally losing her mind. And it was at this point that I decided the book was a sort of touchstone for Hardy. Like Leonard Shelby in ‘Memento’, writing notes to himself so he doesn’t inevitably forget.

The doors of my memory are closing in the most terrifying of ways, slamming shut with the clanging finality behind me like the credits of Get Smart. There are gaping holes where there should be anecdotes and pain and remorse. The lines between truth and fiction are so smeared I sometimes can’t remember if I was actually friends with the Goonies or whether they were just characters in a movie.

Apart from being very funny, Hardy is also audaciously honest (always good in a memoir/autobiography). But her honesty stretches beyond self-reflection and confession. The book includes e-mail exchanges with the people she (sometimes viciously) writes about. An old boyfriend corresponds with her after reading the short story about their prostitute-riddled relationship – an interesting e-mail in which he despairs the seeming lack of love she had for him, and is bewildered by her confession of his purely bad-boy appeal. An old friend carrying an old hurt responds to Marieke’s confessional story about the demise of their friendship – and it’s both awkward for being so relatable, while also brimming with surprising hope for social networking.

And of course the final story is all about Bob Ellis. This little quirk of Marieke Hardy’s is well-documented and met with scepticism and hopes of irony. She is obsessed with the Australian writer, journalist, film-maker and political commentator, Bob Ellis. He is a rotund and sweating man, visceral and mean. But he writes bloody brilliantly, as Hardy reiterates, and has even commemorated with a tattoo. She talks about their dancing around each other and eventually becoming sort-of friends and associates, explaining her deep loyalty and admiration for the man and the ramifications this love has had on her dog. And then, not surprisingly, she talks about her idol wobbling atop his pedestal.

But throughout this final story I couldn’t help but think of Marieke Hardy as being my Bob Ellis. Hardy has tucked pieces of Ellis’s writing away and emblazoned his sentences; I have two sketch pads filled with Marieke Hardy’s words and witticisms, and a twitter follow to show my devotion to her thoughts. There are little snatches of paragraphs and lines of poignancy throughout ‘You’ll Be Sorry’ which I will tuck away and keep for myself;

We would have babies and get fat and quit drinking and not spend every waking moment together. We would turn up to events for which we had accepted invitations without texting absurd excuses. We had grown up.
It was an essential part of letting go, deciding which ribbons of the past we wanted to tie around our fingers and which were best left on the maypole.
I could weep for the unfairness of it all now. For the necessity in closing the door on the travelling salesman of youth. I could weep with such fondness for us all.

Marieke Hardy is one demoness of a writer and a rapscallion memoirist. I have two sketch pads full of ‘Frankie’ articles and ‘Back Chat’ pieces that prove I love anything she writes . . . but I wasn’t prepared for how much I would enjoy ‘You’ll Be Sorry When I’m Dead’. I made a giggling nuisance of myself on the train and tram while reading this. No doubt I’ll attempt to shove it down my friend’s throats and hound them with requests for reading updates (“have you read this bit yet?” or “are you up to the part where___?”) . . . but first, I think, I’ll pass the book onto my grandmother and happily anticipate the delighted guffaws to come. 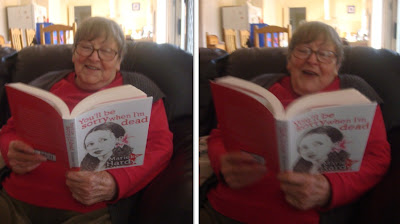