'After the Darkness' by Honey Brown 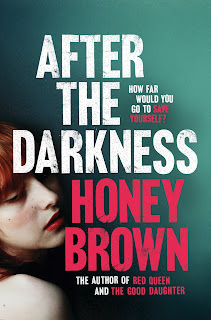 Trudy and Bruce Harrison have a happy marriage, a successful business, and three teenage children. One fateful day they take the winding coastal route home, and visit the Ocean View Gallery, perched on the cliff edge. It's not listed in any tourist pamphlet. The artist runs the gallery alone. There are no other visitors. Within the maze of rooms the lone couple begin to feel uneasy – and with good reason.

Trudy and Bruce will be ripped from the safe, secure fabric of their life and will have their world turned upside down and shaken. Attacked, trapped and brutalised, they barely escape the gallery with their lives – only to find there's no real getting away.

A weeklong getaway; no kids, no work just each other. Bruce and Trudy Harrison are the envy of their friends; they haven’t had infidelity or financial struggles like other long-term married couples. They have three lovely teenage children and a booming property development business in affluent Delaney. And they are still very much in love – so much so, that they take a week every year to just be together.

On the last day of their getaway, Bruce and Trudy spot a sign for the Ocean View Gallery, and decide to go off the beaten path. What they discover is a breathtaking cliff-side architectural wonder – a house of pure artistry. They also meet Reuben, the weathered old architect who is more than happy for them to take a look around his artistic wonderland.

The house is a maze without windows, decorated with finely carved statues and wood that’s smooth as petals. But the Harrisons become uneasy. All alone in this cliff edge house, not another soul in sight… their worry turns to fear when Reuben’s true nature shines through.

What happens next is unthinkable, unimaginable - the prelude to a horror story.

But Bruce and Trudy survive. Barely. They manage to kill their would-be murderer, and escape the house … and that’s when things go wrong.

They return home, and Bruce refuses to call the police. Trudy burns their clothes; out of sight, out of mind. But the truth cannot remain buried. Strange coincidences have Trudy questioning if Reuben wasn’t the only psychopath in that house … does somebody else know what happened? Who was Reuben, and who would take revenge for his death?

When reality blurs and terror reigns, what lengths will people go to forget?

‘After the Darkness’ is the new psychological suspense novel from Australian author Honey Brown.

I had my first taste of Honey Brown last year, with her crime/suspense novel ‘The Good Daughter’… and I was blown away, and knew I wanted to read anything and everything by this author.

The novel starts sedately enough. We meet Trudy and Bruce Harrison on holiday and enjoying post-coital bliss on the last day of their trip. Married for a little over a decade with three beautiful teenage children, Bruce and Trudy are an unassuming, quiet couple. When they make a spur-of-the-moment decision to visit Ocean View Gallery their tour starts out perfectly normal, just another enjoyable weekend jaunt. The house is an architectural delight, and Reuben, artist and guide, is more than happy for them to snoop around his cliff edge home… Then things take a horrific turn when Reuben’s mask is lifted.
Bruce is drugged and tied up, Trudy sprayed in the eyes with a chemical. They are going to die, and it’s only good luck and quick thinking that saves them.

Brown’s opening may sound like a scene out of ‘Saw’ or ‘The Hills Have Eyes’, but it doesn’t read that way initially. Brown instead lulls readers into the picturesque cliff edge house; she takes her time introducing us to this married couple… readers are as tricked by these scenes as Bruce and Trudy are by Reuben’s kindly demeanour. The quiet beforehand makes the violence all the more shattering. And what’s terrifying and terrific about her opener is that it starts out so perfectly normal, as a reader you could picture yourself in Bruce and Trudy’s shoes … so when that normality turns into everybody’s worst nightmare, it’s all the more explosive.

From that initially horrifying beginning, Brown then flips the book on its axis yet again. Because Bruce and Trudy don’t just survive … they kill their murderer, and seemingly get away with it. In the aftermath of escape, with shock settling in and Bruce particularly traumatised by the abuse he suffered, the couple do not call the police. They don’t report their kidnapping, or Reuben’s murder. They burn their clothes, and make up a mugging story to explain their various cuts and bruises. They try to forget. And just as the opening was made all the more terrifying for the normality before the violence, so too is the rest of the book all the more chilling for Bruce and Trudy’s slow burning descent into trauma and madness…

Honey Brown, I am finding, excels in writing suspense from ‘what if?’ You can’t help but read her books and put yourself in the protagonist’s complicated shoes. Bruce and Trudy are an ordinary couple who escape tragedy, barely – and reading their ordeal you do ask the question “what would I do?” “how would I react in that situation?”.

The crux of the story comes from the many tangled and terrible decisions that Bruce and Trudy make following that very question; “what would I do?”. We all like to think that we’re law-abiding. We watch enough crime shows from ‘Law & Order’ to ‘CSI’, and courtroom dramas like ‘The Good Wife’ to know that you can’t hide a murder; criminals always get caught, evidence is always left behind. But what happens when you are the victim, but circumstance turns against you and your moral code is no longer so black and white.


'Does it feel real to you?' I said. 'Sometimes it's like my body knows but my mind isn't sure it happened.'
Bruce went through each photo again, quicker this time, looking at the shot in its entirety, trying to get an outsider's perspective.
'It's the things I did that remind me the most. I should have stopped before killing him.' He looked sideways at me in the dark. 'I got it for a second, you know? I wanted him dead, I wanted him destroyed, and I wanted to feel it happen, and do it, and to...' He breathed out. Even in the gloom I could see he'd turned pale. 'It was like I'd been given permission to act like that, but not by God or anything good.'
'By nature?'
'Then why does it feel so wrong?'
'Nature isn't necessarily good.'

‘After the Darkness’ is also a deep and dark journey into post-trauma. In the days, weeks and months after their ordeal, Trudy and Bruce experience very different reactions to the violence. They go through warped stages of grief and guilt – all misplaced and not-quite-right for them being both the victims, and murderers. But the aftermath is made all the worse because it is a choking secret – they can’t tell their children, though they can sense something is wrong in their parent’s marriage. Trudy’s friends suspect an extramarital affair, while Bruce’s parents openly snicker at them hitting the first real bump in their relationship. And their marriage does suffer under the burden and strain of their shared secret trauma;


His body tensed and I felt his breath, warm with grief, against my skin. That day was so real then. I'd been right - our bodies did know, the memory lived inside our bones; using our bodies had released it into our bloodstream. That house surged in our brains. We could taste, smell, feel Reuben's house. Reuben was in bed with us, he was vivid. His thoughts in our heads and his will to hurt us were tangible. He was in the light sheen of sweat covering our bodies. We would have to get up and wash him off.

Paranoia creeps in as Trudy and Bruce’s memories of that frightening day begin to blur around the edges. Trudy starts wondering if she heard another man’s voice in the house with Reuben, and if a string of coincidences since are linked to someone taking vengeance for Reuben’s death. Their fear starts to feed off one another and takes them down an even darker path… leading them to learn how easy it can be to turn from victim to abuser, innocent to monster.

‘After the Darkness’ is chilling and riveting. It’s a psychological/suspense story, made all the more frightening for the normality that precedes the horror. It’s a story about victims and killers, and how easily that line can blur as Bruce and Trudy Harrison start to realize that you can survive, but never escape. Honey Brown is an exquisite storyteller who will make your heart race and spine tingle. You must, must, must read her books for a good dose of thoughtful fear.