'The Children of the King' by Sonya Hartnett 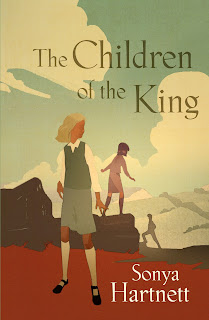 Three children have been sent to live in the countryside, safe from the war in London. When they find two boys hiding in a castle, the past and future come together to make an extraordinary adventure.

Cecily and Jeremy Lockwood, along with their mother, are fleeing London and going to the countryside. While the city blackens itself in preparation for air raids, and newspaper headlines scream that France will fall… the Lockwood children are being whisked away to Heron Hall, to stay with their Uncle Peregrine while their father holds the fort in London.

Upon arrival at the country train station, the number of children with nametags and suitcases delights twelve-year-old Cecily. She begs her mother to take home one of the evacuee children, and fourteen-year-old Jeremy agrees – though his reasons are purely patriotic, while Cecily envisions taking home a friend to amuse her at Heron Hall. Cecily chooses a black-haired girl called May Bright, who is ten-years-old and wise beyond her years.

Life at Heron Hall is not at all what May is used to. There’s a cook who takes food orders, maids and grandiose bedrooms. The mansion sits on a sprawling bit of land that May enjoys exploring with Peregrine’s dog, Byron. To escape Cecily’s incessant chatter and avoid disturbing Peregrine’s important thinking work, May walks around the estate… and discovers a river, on the other side of which lays ruins.

The ruins intrigue all three children, even more so when Uncle Peregrine tells them that it was once a place called Snow Castle. He assures the children that there’s a terrible tale associated with the place, a tale that is “unfit for childish ears.” Ever persistent, the children manage to coax a story in instalments out of Peregrine, about the dastardly devious story behind Snow Castle…

But even as the tale is being told, the Castle holds a new fascination for Cecily and May. Two boys are hiding in the castle’s ruin, brothers who speak of spies and watching eyes…

Meanwhile, Jeremy feels the valour and bravery are pulling him back to London, back to his father. As the war unfolds, he feels a sense of duty that belies his young years.

‘The Children of the King’ is a new young adult novel from popular Australian author, Sonya Hartnett.

Hartnett’s book really feels like a hark back to children’s stories of long ago – very reminiscent of C.S. Lewis and Enid Blyton. The connections, for me, were in Hartnett’s masterful use of language and description – her writing is lyrical and wonderful, but not difficult (I’d say, a 12+ age-bracket readership). And even though Hartnett uses an omniscient narrator, she still gives wonderful perception and insight into each of the characters. I particularly loved Cecily – who starts out as a snobbish princess, and doesn’t precisely command likability… but as the novel progresses and Hartnett writes a sway in her character and perception, you do start cheering her on and revelling in her transformation. May Bright was an equally wonderful character, even more so for being so young – at just ten year’s of age she’s whip-quick and wise beyond her years, a thoughtful young lady with an iron-clad backbone that would be enviable in an adult, but in such a young protagonist is downright brilliant!

Alarmed to find herself pulled into the discussion and, worse, made its central object, May changed the subject. ‘My father went to France,’ she offered.
The statement cooled the room. ‘Your father’s a soldier?’ asked Peregrine.
‘He wasn’t before the war, but he became one.’
‘He volunteered?’
‘Yes, he volunteered.’
‘France!’ said Cecily. ‘Are you very worried about him?’
‘Of course she’s worried about him! Don’t be thick, Cecily.’
May glanced around at her adopted family, who gazed back as if she were a most exotic thing. When she spoke, it was carefully. ‘My mum says being worried can’t change what happens. It can’t make things better. So you should just live and – be happy about what’s good. That’s what I think, anyway.’

Jeremy is another incredible young character, and his journey is the most heartbreaking of all. Not to give anything away, but some of his scenes had my heart leaping into my throat – they are brilliant and tragic for the way Hartnett writes a crumbling of innocence, a confrontation of mortality courtesy of the war.

In thinking that Hartnett’s story was reminiscent of Lewis and Blyton, I was half expecting the novel to take a fantastical turn. The children are thinking the same thing, though for very different reasons. May and Cecily are coming to think of Snow Castle as a mystical place, particularly when they discover two brothers camped out there and Uncle Peregrine starts telling a story that connects to Richard III (and the 'Princes in the Tower'). Jeremy, on the other hand, has delusions of war – he, like many young men his age, think of fighting as a patriotic duty and the glory of victory.

Hartnett’s story had me thinking about the infamous quote from ‘Hamlet’: There are more things in heaven and earth, Horatio, / Than are dreamt of in your philosophy. The children come to learn (as does the reader) that there are, literally, ‘more things in heaven and earth’… for all that readers, and the children, feel like there is something grand and magical lurking, they soon realize that the adventure and the tragedy is in their own lives and the past. As the war creeps into their young minds, as they are each confronted with the truth and brutality of war, they soon realize that whatever they dreamed up could not possibly match what is playing out in battlefields across Europe, and the Pacific. Equally chilling for the children is the historic 16th century murder mystery of the 'Princes in the Tower', which is more frightening than anything Uncle Peregrine could have dreamed up. Thus, ‘The Children of the King’ is part ghost story, part coming-of-age (with the loss of innocence), as we read Cecily, Jeremy and May navigate their war-torn childhood, to become a little bit wiser, and tougher.

Sonya Hartnett is, without a doubt, one of Australia’s master storytellers – that title should not be bandied about lightly, and when you read a novel as hauntingly sublime as ‘The Children of the King’ you do realize it is an utterly deserved title.

Australian Women Writers 2012 Reading and Reviewing Challenge
Posted by Danielle at 11:54 AM