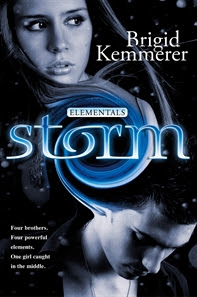 When Becca Chandler saves Chris Merrick from being beaten up in the school parking lot, she has no idea how dramatically this one action will change her life. Because Chris Merrick is no ordinary guy and neither are his three older brothers. The Merrick boys are Elementals. Hot. Powerful. Dangerous. Marked for death. And now that she knows the truth, so is Becca.

With her life at stake, she doesn't know who to trust or whose secrets she should keep. Hunter, the mysterious new kid with a talent for being in the wrong place at the right time, might be the one boy Becca can put her faith in. But with two boys vying for her affections, and pressure rising all around her, will she find out in time who's hiding the most dangerous truth of all?

Staying behind after school for a late night defence class, Becca stumbles across a violent scene in the parking lot. Her classmate, Chris Merrick, is being beaten up by some well-known school thugs, and Becca knows she has to save him before the beating goes too far. So she uses her car as a weapon and bundles Chris to safety . . . but he’s reluctant to go to the hospital. Chris just wants to be taken home, to his brothers, and he talks cryptically about wanting rain.

When Becca reluctantly does as Chris asks and takes him to the Merrick household she is shocked to discover his brother’s violent but unsurprised reaction toward Chris’s beating. They don’t seem the least bit surprised to learn who Chris’s attackers were, and they quickly plan retribution. But the brothers also turn a suspicious eye towards Becca, wondering if she is somehow linked to Chris’s attack . . .

Becca learns all about the Merrick brothers, their sad history and uncertain future. Their parents died a few years ago, under mysterious circumstances, and the boys have been under the guardianship of oldest brother Michael ever since. Michael runs the family’s landscaping business; he has the weight of the family on his shoulders and is in a constant battle with his younger brothers, who rally against his attempts at parenting. Michael also has a tarnished reputation in the town, linked to the tragic and (supposedly) accidental death of a girl he once knew. Then there are the twins, Gabriel and Nick, who pretend to be each other so Gabriel can play more school sports and avoid the wrath of the many girls he has ditched. Gabriel fights the most with Michael, in a never-ending battle of wills and old hurts. Chris is the youngest Merrick brother; losing his parents at such a young age continues to impact on him, and bearing witness to his brothers’ many battles is slowly turning him hard and distant.

Chris’s attackers soon have Becca in their crosshairs, thinking her to be in cahoots with the Merrick brothers. Meanwhile, the brothers are still suspicious of her right-place-wrong-time involvement in Chris’s attack. And when a new boy called Hunter takes an interest in Becca, she also finds herself caught between two unlikely love rivals. It all leads to Becca becoming embroiled in the Merrick brothers’ town war, and their most devastating secrets.

‘Storm’ is the debut young adult paranormal novel from Brigid Kemmerer, the first in a new series called ‘Elemental’.

As Becca slowly learns the secrets and scandals of the Merrick brothers, she also discovers their biggest secret of all . . . that they are all tied to the four elements – earth, wind, fire and water. She also discovers that there are those who would do anything to make certain the Merrick’s never use their powers ever again. ‘Storm’ centres on youngest Merrick Chris, who has the power of water. Gabriel is the most hot-headed of the brothers, and has the power of fire. Nick, the slightly more subdued brother, is wind while Michael has links to the earth.

He saw nothing.
Lightning hit closer, about eight feet to their left.
He swore, yanking her with him as he backpedalled across the field.
‘Do something!’ she cried. ‘Can’t you build a wall of ice, or –’
‘Are you kidding?’ he said. ‘I’m not an X-Man! This is –’
Crack. Lightning bolt, right where they’d been standing. Becca screamed.


There is quite a lot happening in this first book that sets up the trajectory for the whole series. As well as meeting Chris Merrick and becoming entwined with his brothers’ woes, Becca is also dealing with the romantic interest from a new boy at school called Hunter, who has a charming smile, cheeky dog and a strange affinity for power crystals. Add on to that the reappearance of Becca’s father, who walked out on the family supposedly to concentrate on his job as wildlife conservationist, and the Merrick brothers’ town war which has Becca in its crosshairs. Phew! If you think that sounds like a lot of balls being juggled, you’d be right. I can’t say that Kemmerer does a good job at keeping them all in the air – but she certainly kept me hooked for the whole book and keen to read the second instalment.

This book focuses on Becca, and while I thought it would be all about her potential love for Chris Merrick, I was surprised at how much conflict and page-time is devoted to Becca’s interest in new boy Hunter. It’s an interesting love triangle, particularly because it’s not as clean-cut as many other will-they-or-won’t-they trifecta romances. I genuinely didn’t know who would get the girl, and I was pleasantly surprised by the book’s conclusion that ends slightly messy and complicated, rather than tied with a nice neat bow. The messy romantic entanglements are indicative of the whole book, which prefers more messy-real to a lot of other slightly squeakier-cleaner YA paranormal’s. For instance, Becca is battling a nasty rumour at school that has her sleeping with half the boys on the soccer team. The rumour has basis in a horrifying ordeal Becca had with the school’s star soccer player. This was a hair-raising side-story, and I appreciated the fact that Kemmerer treated Becca’s trauma with the necessary gravity and horror it deserved. Becca doesn’t necessarily respond to the situation in the way we would hope a young woman would . . . but, again, Kemmerer isn’t writing textbook scenarios or proper emotional ‘procedurals’. She’s writing messy complications. It was a very gritty detour in the story, but a well-handled one, in my opinion.

Likewise, Kemmerer has written the Merrick brothers with a reputation. Chris mentions ‘jail bait’ walking through their house frequently, and Gabriel definitely has a way with the ladies. I liked that Kemmerer didn’t really shy away from the boy’s reputation with the ladies, and this will definitely make for some interesting storylines when each of the brothers gets their own book.

Kemmerer does tip her hat to the other paranormal YA’s who have come before her. I get the impression that she is a true fan of this genre, and it hasn’t escaped her notice that there are certain staples in ‘Storm’ that appear in a few other YA paranormal novels. She has fun with it, and I loved that. Like this line that hints at Adam & Eve by way of the famous apple front cover and moment in Stephenie Meyer’s ‘Twilight’:

‘Here.’ He held out his apple. ‘I can’t eat while you’re just watching me.’
Quinn snorted. ‘The symbolism here might just kill me.’


I do wish that there had been a bigger and more authentic focus on Becca’s relationship with her father. He abandoned the family when she was just a little girl, supposedly for his demanding work as a wildlife conservationist. It’s mentioned a few times that the job which initially forced him away from his family had to do with endangered crabs (or something?). I found it odd, and then somewhat absurd, that when Becca’s father reappears after so long away (his idea of parenting being two phone calls a year) that she doesn’t call him out on the bogus reason for his abandoning the family in the first place. However, I did get the impression that Becca’s complicated relationship with her father will be explored in future books (and was perhaps too complex to fit into the first instalment).

The big draw-card of this series is the family focus. Kemmerer whets readers’ appetites by introducing us to each of the brothers, and setting up their storylines. Gabriel was my favourite; he’s a bad-boy with a fiery streak, a Lothario reputation and an ongoing family feud with his oldest brother. Second favourite is Michael, the eldest brother who has the weight of his family on his shoulders. . . he has a tragic back-story, and while I know Kemmerer has written a short novella prequel which tells Michael’s story (set before ‘Storm’) I do hope he gets his own full-length book too.

Brigid Kemmerer has written a winning combination in this new paranormal series. Mix a family of hot, orphaned brothers with an old town mystery and kooky superpowers . . . and, voilà – addictive reading!