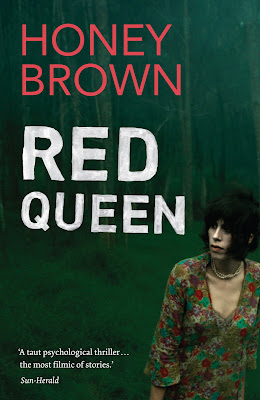 DEEP IN THE Australian bush, Shannon Scott is holed up in a cabin with his brother, Rohan, waiting out the catastrophic effects of worldwide disease and a breakdown of global economies.  After months of isolation, Shannon imagines there's nothing he doesn't know about his older brother, or himself – until a mysterious woman slips under their late-night watch and past their loaded guns.

Denny Cassidy is beautiful and a survivor.  Her inclusion into cabin life brings about the need for a new set of rules.  Soon the brothers begin to look to her as a source of comfort, hope and intimacy . . . Or is her warmth just a trap?  Could she actually be a cold tactician, a woman with a deadly agenda?

Shannon Scott is sick of looking at his brother’s face. He and Rohan have been living in the remote Australian bush since the plague broke, and Shannon is growing more and more irritated with Rohan’s quirks and dominance – from his nicknaming him ‘pup’ to the way he resignedly wins at poker.

But since their parents died of the Red Queen Virus months ago, Rohan is all Shannon has. And, thanks in large part to their paranoid father, they have a well-stocked, veritable fortress to live in and wait out the mayhem of the outside world as country’s scramble for a cure or, in the meantime, attempt to regain control of the populace.

So Rohan and Shannon wait. They tend to the sheep and chooks, fish in the nearby river and take turns standing guard with loaded rifles; watching the quiet bush that surrounds them for any signs of intruders.

And then Denny Cassidy comes along.

She leaves a note, explaining that she has been watching them for weeks from her perch atop the hill. She says she is not infected. She says she wants to stay with them. She has already been in their house, taken some of their food without them knowing . . .  she is not dangerous, she says.

Rohan is adamant that this is a bad idea. The Red Queen Virus can take up to two weeks to show symptoms, and he doesn’t trust Denny’s sudden appearance or her humble motives. But Shannon wants her to stay – he is intrigued by a new face, a young woman no less, and thinks that if they turn her away, they will have lost all vestiges of their humanity.

So Denny stays with them.

At first she is a real asset to their home life; helping with chores and willing to comply with Rohan’s stringent rules. But when her hand starts lingering on Shannon’s knee, when she starts offering him back rubs and sings along with his guitar-playing . . . the dynamic in the house shifts. Denny chooses Rohan’s bed, but continues to coax Shannon, until everything becomes messier and more complex than either of the brothers could have ever expected; especially when they both fall in love with her.

But is Denny playing a game? Is her love a survival technique, or genuine feelings for two men?

My first Honey Brown book was ‘The Good Daughter’; a tightly-woven, small-town mystery that had me in the palm of her hand from page one. My second Brown reading, ‘After the Darkness’ was just as enjoyable – a ticking psychological thriller that had me on the edge of my seat. So I always knew that I would eventually go back and read Brown’s critically-acclaimed debut novel – I’m only sore at the fact it took me this long to get around to it because, as I suspected, ‘Red Queen’ was wonderful.

The dystopian genre has exploded in recent years. Everything has pretty much been covered – from a world ravaged by global warming, to structured society’s ruled by government theory. I have read dystopian wastelands, and worlds plagued by disease that turns people into zombies. I've pretty much read all that dystopia has to offer, but I've never read anything quite like Honey Brown’s ‘Red Queen’.

The book is told from Shannon’s first-person narrative. At one point he offers a theory of the Red Queen Virus origin. He says that it came from an “arms race principle” – that when humans stopped treating the symptoms of diseases, and started fighting the causes of them, they effectively issued war against biology. The theory being that humanity had gotten so good at curing itself, lowering death-rates and overpopulating the world with surgeries, vaccines, medicines etc, that disease was forced to evolve – into the Red Queen Virus (of which, it is rumoured, there is now ten strands – RQV1 through to RQV10 – as the virus keeps adapting). The virus is, essentially, righting the wrongs of science by culling the population. The virus starts as a common cold, but progresses to fluid in the lungs and a slow, bloody death. Transmission is easy, and can be found in the touch of one’s hand;

What was without question was the sovereignty of touch. We did not touch. It had become automatic the minute the virus landed on Australian soil. It wasn’t a spoken rule; arms could brush, shoulders could bump, and incidental skin contact was repellent but forgiven, but conscientious touch – fingertips, a warm hand, a face too close – it just went without saying. Personal space had shrivelled to a hard nut so far inside each body even your own hand on your skin could seem unwanted. So the sight of Denny’s hand, the long curve of her thumb, the dirty curl of her fingers, held out and inviting the chance of Rohan’s touch, became the centre of the room, and everything converged in on it.


Throughout the book all three characters drop hints and speculations about how the outside world is coping and trying to cure the RQV. Denny, Shannon and Rohan can only muse on the word-of-mouth they heard before going into hiding – but the consensus is that China has a cure (because of their low rate of infection) but they don’t intend to hand it over. Metropolitan areas are deserted, and people have scattered all over. Denny claims that the army are providing rations to the groups who have banded together – but lone travellers or ‘unknowns’, are set upon by those groups and shunned by the army. As long as the Red Queen Virus keeps adapting and killing, humanity will continue to crumble. Denny says that Rohan and Shannon have done well to stay hidden in the outback, and she is glad to be banded with them.

What I love about Brown’s dystopia is that while chaos reigns in the outside world, ‘Red Queen’ is focused entirely on three characters and their evolving dynamic in a small, secluded cabin in the bush. So often in dystopian’s these days, our protagonists just so happen to be in the thick of the action – apart of the uprising rebellion against the totalitarian regime, or a member of the group tasked with searching for ‘the cure’. Sometimes in those books, the world-building is so grand, the plot so epic and in the thick of it, that human connections get lost amidst the dystopian theatrics and themes. Not so in ‘Red Queen’. Brown never lets us lose sight of why the brothers and Denny are out in the middle of the bush – a virus is raging and the world as they once knew it is forever changed. But the really, truly fascinating crux of the book is in Brown’s explorations of human interaction.

Rohan is older than Shannon – 38 to his 23. This age discrepancy has informed their entire relationship in the cabin, with Rohan the self-appointed alpha (who calls Shannon ‘pup’, as a reminder). Their past sibling interaction also informs how they are with each other now – their parents had Rohan when they were in their teens, so the boy’s father treated Rohan more like a friend than a son and so taught him different life skills than Shannon (who consequently took after their mother). Shannon and Rohan also never lived together growing up – they saw one another for family dinners and outings, but their time together in the wake of the virus outbreak is their first prolonged period of time together.

Enter Denny. She is 30 years old and more than willing to adhere to Rohan’s rules in his presence, but quick to side with Shannon in private. Denny’s presence is the match-strike to the tense kindling relationship between the brothers. She starts flirting with Shannon, but goes to Rohan’s bed. When she shows an open attraction to both brothers, old rules of civility and boundaries are blurred and skewed.

Reading the knife-edge relationship between the brothers is a fascinating dip into the human psyche unto itself. Throw a beautiful woman into the mix, and ‘Red Queen’ becomes a terse psychological thriller . . . especially when Honey Brown starts readers questioning Denny’s intentions. Does she have genuine affection for both brothers? Or is she playing them off one another – and if so, to what end? This is where ‘Red Queen’ becomes a stand-out from all other dystopian’s. I feel like in other ‘disaster’ books, the triggering plague/earthquake/zombie-horde sometimes overshadows the characters. Not so in ‘Red Queen’. The virus provided the necessity for the setting, and adds a certain permeating paranoia; but ultimately ‘Red Queen’ is about human foibles and trickery. Brown has readers questioning how far human-beings will go to save themselves; what boundaries they’ll cross, and who they will betray.

Something I find fascinating in all of Brown’s books is her portrayal of women, in particular their interactions with men. She touches a lot on violence against women, particularly rape, without writing explicit scenes. Sometimes there’s more power in Brown putting the idea out there than actually reading a gut-churning rape scene. She did it in ‘The Good Daughter’, when the main character was almost gang-raped but escaped with the help of a stranger – and I honestly felt sicker in the build-up and possibility of that violence, more so than with some books in which the writer lays it all on the page. Brown does it again in ‘Red Queen’ – poking and prodding the idea of men and their dominance over women, without writing graphic scenes. As a woman, it was one of the first things I thought of when I read Denny approaching Shannon and Rohan – she does so early on in the book, when as a reader I was still trying to establish how they’d treat her – and, I admit, my mind went to rape. I think it’s a very unfortunate, but natural reaction that female readers will have in the book – that inherent “what would I do in her shoes?” and the thought of being raped by these two men is an obvious one to flit across your mind. Brown acknowledges that – she expands on it and questions it in such a way that will have you thinking on societal norms and human interactions. And that’s partly why I love reading Honey Brown’s portrayals of women – she writes our fears and thoughts without horrifying us with unnecessary graphic detail. And, as I said, Honey Brown writes better brutal build-up than some authors do violent scenes.

I was utterly and completely enthralled by ‘Red Queen’. I was guessing at Denny’s intentions right up until the very last page – and the ending was one of the trickiest and most satisfying I have ever had the pleasure of reading. I now, officially, love all of Honey Brown’s books – but, by a small margin, I would perhaps recommend ‘Red Queen’ above all others. A very different look at dystopia – this is a tense, human psychological drama that doesn’t lose sight of the triggering disaster, but rather writes a brilliant guessing game around its fallout. Incredible. 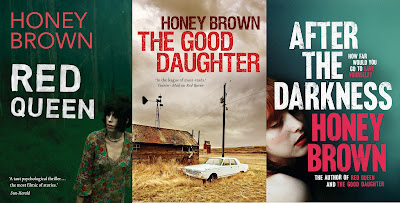