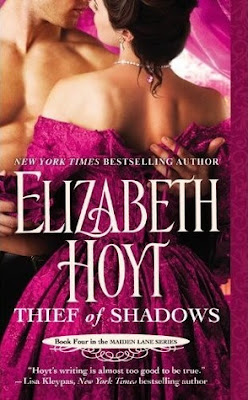 A MASKED MAN . . .
Winter Makepeace lives a double life. By day he's the stoic headmaster of a home for foundling children. But the night brings out a darker side of Winter. As the moon rises, so does the Ghost of St. Giles-protector, judge, fugitive. When the Ghost, beaten and wounded, is rescued by a beautiful aristocrat, Winter has no idea that his two worlds are about to collide.

A DANGEROUS WOMAN . . .
Lady Isabel Beckinhall enjoys nothing more than a challenge. Yet when she's asked to tutor the Home's dour manager in the ways of society-flirtation, double-entendres, and scandalous liaisons-Isabel can't help wondering why his eyes seem so familiar-and his lips so tempting.

A PASSION NEITHER COULD DENY
During the day Isabel and Winter engage in a battle of wills. At night their passions are revealed . . . But when little girls start disappearing from St. Giles, Winter must avenge them. For that he might have to sacrifice everything-the Home, Isabel . . . and his life.

Winter Makepeace has taken it upon himself to be the saviour of St. Giles, by donning a mask and becoming its Ghost.

By day Winter Makepeace is the humble austere manager of the Home for Unfortunate Infants and Foundling Children, situated in the squalid section of London; St. Giles. But at night Winter dons a Harlequin mask, arms himself with swords and sweeps the streets for criminals and crooks, thieves and murderers.

St. Giles was a weeping wound of humanity. Those too poor to live elsewhere came here. the prostitutes, the thieves, the ones enslaved to gin. All the dregs of London. And with them came their problems: rape and thievery, starvation and want, abandonment and despair. He’d long ago learned that there weren’t enough hours in the daytime to help the destitute of St. Giles, so he’d taken to the night. Some wrongs needed more than good intentions and prayed to correct.
Some could only be helped with the point of a sword.

He was taught to be the Ghost from a young age, by a family friend who saw how difficult it was to protect orphaned St. Giles children from predatory whoremongers and the like. Winter has done a fine job of keeping his ghostly identity a secret, but after rescuing the infamous Mickey O’Connor from the hang man’s noose; the occupants of St. Giles are out for the Ghost’s blood, or if the law can get to him first, they’ll take him to the hangman directly. On one such night when the Ghost is set upon by angry St. Giles residents, he narrowly escapes the mob with his life when Lady Isabel Beckinhall whisks him into her carriage and takes him to her townhouse – to mend his wounds. She never sees his face, but Lady Beckinhall becomes fascinated and somewhat enamoured of the mysterious, steely Ghost, and vows to find out more about him.

Widowed Lady Isabel Beckinhall is a member of the The Ladies’ Syndicate for the Benefit of the Home for Unfortunate Infants and Foundling Children. Isabel believes the home to be a good cause, even if its manager is a cold-shouldering stick-in-the-mud. No matter how much she dislikes Winter Makepeace, Isabel can admit that he does an honourable job as the home’s manager. That’s why she’s somewhat dismayed to learn that the Ladies’ Syndicate is considering deposing Mr. Makepeace as the home’s manager, and inducting one Lord d’Arque to make the orphanage his pet charity project. Even more dismaying than this news though, is the suggestions that Isabel be in charge of bringing Winter Makepeace up to scratch – to turn him into a refined gentleman whom the Ladies’ Syndicate can be proud to trot around ballrooms and associate with their pet cause.

Winter Makepeace and Lady Beckinhall have a rocky start. He thinks her frivolous and loose, while she finds him to be barely hospitable and cantankerous for one so young. But when orphaned children start disappearing off the streets, suspected kidnapped, both Isabel and Winter are united in their attempts to save the stolen orphans. And when Isabel continues to cross paths with the infamous Ghost of St. Giles, she creeps ever closer to the truth behind the mask. . .

Confession: I had written Winter Makepeace off as a bit of a wet rag. From reading him in previous books – the older brother to Silence Hollingbrook and Temperance Dews – I really didn’t think much of him beyond his standing as orphanage manager. By contrast, I had been utterly riveted by the consistent side-story of the Ghost of St. Giles which appeared in all other ‘Maiden Lane’ books. So I was, to be perfectly honest, quite shocked to learn that Winter Makepeace was our dastardly Ghost – shocked, but also delighted. And after reading ‘Thief of Shadows’, my ideas of Winter Makepeace are forever, wonderfully, altered – he is a man to be reckoned with, and a romance hero to remember.

Elizabeth Hoyt does a wonderful job of writing Winter’s duel-personalities. As the rather dour orphanage manager (often described through Isabel’s eyes), Winter is given to Bible lessons and chastising Lady Beckinhall’s frivolities – versus his rather primal alter-ego when he dons a Harlequin mask and leaps between St. Giles buildings. I loved the fact that Hoyt toyed with reader’s (and Isabel’s) past assumptions of Winter as the most boring of the Makepeace siblings – because when his masked Ghost is revealed; it’s an incredible transformation.

Winter is, in fact, a rather dashing hero. He’s lethal and calculated, a veritable 17th century Bruce Wayne or Tony Stark – when he straps his swords on and wears the Harlequin mask, he becomes someone deadly and barely restrained. And he had my heart racing.

And as thrilling as it was for Winter to pique my interest, it was even better to read Isabel’s turn-around from loathing the man to lusting after him. I didn’t think that Elizabeth Hoyt could write a hotter coupling than the mourning widower Silence Hollingbrook and her river pirate ‘Charming’ Mickey O’Connor. . .  but she has done it with Winter and Isabel.

Winter and Isabel are, without a doubt, one of the best romantic pairings I have ever read. What I really loved was that Hoyt changed up a lot of historical romance clichés in pairing these two. Isabel is slightly older than Winter (early thirties, compared to his mid-twenties?). Isabel is a widower, who has had three lovers since her husband’s death and is not ashamed to admit she likes sex. Winter, on the other hand, has sworn to abstain from pleasure and is a virgin. I loved the change-up with these two; it was so refreshing to read a historical romance in which the man is inexperienced and the lady his tutor. It made for some incredibly lush scenes, with much blushing while reading.

“I think you sometimes like to hide behind a facade of gaiety, my lady.” He cleared his throat. “I also think that when you enter a room, all eyes turn to you. You blaze like a torch, lighting the darkest corners, brightening even those who thought they were already well lit. You bring joy and mirth and leave behind a glow that gives hope to those you’ve left.”
“And you, Mr. Makepeace? Are you one of those who thought themselves well lit?”
“I am as dark as a pit.” Now he was glad her back was turned. “Even your torch will have difficulty lighting my depths.”

As with all ‘Maiden Lane’ books, there is a short sneak-peek at the next instalment. I won’t say anything about who the next hero and heroine will be, but I will say I have my reservations (although they are probably entirely unfounded; I don’t think Elizabeth Hoyt is physically capable of writing a bad romance). But I will say that I still have my fingers-crossed for a book about Asa Makepeace, the black-sheep brother we met in ‘Scandalous Desires’. I was also intrigued by a comment Winter made in ‘Thief’, that oldest orphan, Mary Whitsun, is turning into a beautiful young woman – I would really love a story about her too!

Elizabeth Hoyt’s ‘Maiden Lane’ series is one of the best in the historical romance genre. It is utterly, deliciously splendid – with intriguing heroes and heroines, blazing romances and an ever-intriguing setting of the infamous St. Giles. Winter Makepeace delightfully surprised me with his turn as masked hero in ‘Thief of Shadows’, and his romance with Isabel Beckinhall is one to rival even my previous favourite pairing of Silence and ‘Charming’ Mickey. I loved it, and I can’t wait for book five, ‘Lord of Darkness’, coming February 2013.