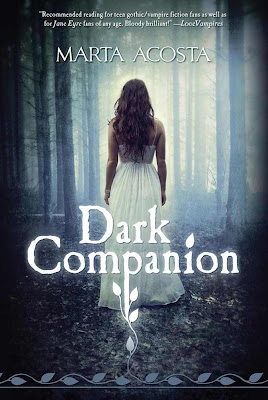 Dark Companion, a contemporary Gothic with a mild fantasy/paranormal element, pays homage to Jane Eyre and other classic Gothic novels.

Small, plain Jane Williams, a high-achieving foster girl, jumps at the chance to escape her violent neighbourhood when she is offered a full-scholarship to the exclusive Birch Grove Academy for Girls. She's even given living quarters, the old groundskeeper's cottage in a grove of birches. The classes are amazing, the campus is lovely, and the other students are bright and inquisitive. The headmistress's family -- including her handsome sons -- is especially friendly.

It all seems too good to be true. But the longer Jane stays at Birch Grove, the more questions she has about another scholarship girl who mysteriously left the school. What price is Jane willing to pay to get the security and safety she's always wanted?


Jane Williams is a foster child from the rough streets of Helmsdale (‘Hellsdale’). Jane could have sunk into drugged ether like her fellow foster-kids, or sold her body on the street corner like her friend Wilde. But thanks to her intelligent and dearly-departed reverend brother, Hosea, she managed to use her brain and get plucked out of ghetto-obscurity with a scholarship to the elite Birch Grove Academy for Girls.

Jane lives in a beautiful cottage on campus, surrounded by lovely birch trees that seem to sing. She is also welcomed into the Grove fold by headmistress, Mrs Radcliffe, and her family. Radcliffe has two boys, Lucky and Jack – Lucky is golden-haired perfection, while Jack is curly-haired mania and infuriatingly teasing of Jane’s pixie-esque physique, nicknaming her ‘Halfling’.

But all is not well at the Academy. A mysterious figure sneaks around Jane’s cottage. Lucky has some peculiar fetishes, and robed chanting can be heard in the thick of the grove . . .

I adore Ms Acosta. She had me in stitches throughout her vampiric comedy-of-manners ‘Casa Dracula’, and has since become an internet favourite with her ‘Vampire Wire’ blog. So I was thrilled to learn that she was to try her hand at the young adult genre.

‘Dark Companion’ is Acosta’s ode to Jane Eyre, veneration to classic Gothic literature, and an absolute tornado of fresh air in the (sometimes) staid YA paranormal romance genre.

‘Dark Companion’ is by no means a play-by-play of Charlotte Brontë’s classic work. Acosta instead takes aspects of Eyre and infuses them with Gothic young adult modernity, so we get forbidden love, a creepy setting, mad women and Jane’s inherent strength;

I pressed down my fury until it metamorphosed as soft messy carbonate does into a diamond so hard it can cut through steel and with such clarity that I could use it as a lens to see the world as it truly was, cruel and capricious.
It was rage that got me to Birch Grove Academy for Girls and out of Hellsdale. I nestled into my bed knowing that rage would help me survive here, too.


Jane really is the stand-out character of ‘Dark Companion’. She’s a character of contradictions – with a sloppy slang tongue but a wickedly sharp mind, and a tough outer shell masking a lonesome girl. I adored her, especially because she didn’t feel like Charlotte’s Jane for very long, as Acosta’s stamp of sassy-vulnerability shone through with the character.

I also loved the boys, Jack and Lucky – two very different brothers who alternately intrigue and infuriate our girl Jane. Jack was especially brilliant – quick with one-liners, ferociously loyal and happy to play the King’s fool (really, any boy who can see himself as a Shakespearean character has my tick of approval).

But my absolute stand-out favourite character had to be Mary Violet, Jane’s fabulous friend with bouncing golden curls and a devious mind. Mary ‘MV’ Violet was très magnifique (that’s French for bloody awesome!). Part of my adoration of MV was her similarity to Acosta’s equally bodacious protagonist of the ‘Casa Dracula’ series, Milagro de Los Santos. Both women exude that certain infectious charisma that makes them both fabulously charming and fabulously funny. . .  and Mary wasn’t the only hark-back to ‘Casa Dracula’, there was a cameo appearance by a certain beloved somebody that had me grinning from ear-to-ear!

‘Dark Companion’ is also dripping in delicious Gothicism. From the quotes of Mary Shelley and Bram Stoker, to Jane’s eerie preoccupation and connection to the whispering birch trees that surround her cottage home. . .  Acosta plays brilliantly with Gothic conventions and introduces young readers to the finer points of horror.

I adored ‘Dark Compaion’, as I knew I would. Marta Acosta’s writing is cunning and flamboyant, a deliciously dark Gothic delight that’s both a tribute to Jane Eyre while also being delightedly Acosta’s own – from the smart and savvy heroine with a rapier wit, to the cast of gorgeously funny secondary characters, ‘Dark Companion’ is a welcome addition to the paranormal YA scene.

'Dark Companion' is available from July 3