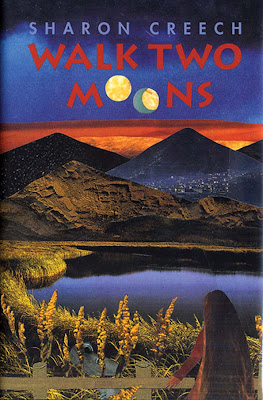 "Sometimes you know in your heart you love someone, but you have to go away before your head can figure it out."

To trace the path of her missing mother, Sal embarks on a journey from Ohio to Idaho with her grandparents. On the road, Sal tells the strange and exciting story of her friend Phoebe. As the miles pass, Phoebe's tale becomes more and more outrageous, while Sal's own story begins to emerge. In unraveling Phoebe's mystery, Sal comes ever closer to finding out the truth behind her own bittersweet journey. What will she find at the end of the road?

Salamanca "Sal" Tree Hiddle is telling a story to her Gram and Gramps. While on a road-trip trek from Ohio to Idaho, with the trees whispering for her to ‘hurry, rush, hurry’ Sal is recounting the story of her friend, Phoebe Winterbottom and the lunatic who changed her life.

But in the telling of Phoebe’s tale, Sal is learning the truth of the old proverb: "Don't judge a man until you've walked two moons in his moccasins" . . .  because Phoebe’s story is entangled in Sal’s own, and what happened when her mother left for the badlands.

‘Walk Two Moons’ by Sharon Creech was first published in 1994, and won the Newbery Medal in 1995. It has since become an American children’s classic, and for good reason.

I read the last chapter of Sharon Creech’s ‘Walk Two Moons’ aboard the Number-57 tram. Lumbering towards Lonsdale Street I started to cry, and by the time I'd arrived at my North Melbourne destination I was attracting curious stares from my fellow commuters. This book wrecked me, in the best possible way.

We meet Salamanca "Sal" Tree Hiddle shortly after her father has uprooted her from Bybanks, Kentucky and the last memories of her mother. Now they live in Euclid, Ohio next-door to Margaret Cadaver and her blind mother. But when the book begins Sal is at the beginning of a road-trip journey to Idaho with her Gram and Gramps. Something in the trees is compelling Sal to rush across the American heartland, to get to Idaho and her mother . . . but along the way Gram and Gramps want to be entertained. So Sal starts telling them a story. She tells them about her new life in Euclid, where she has befriended the prudish Phoebe Winterbottom, whose family is undergoing a change somewhat similar to the one Sal’s little family went through not so long ago. Sal also talks about Ben Finney, who imagines a soul similar to her own and keeps trying to plant a kiss on Sal’s lips.

‘Walk Two Moon’s is a novel of beautiful equilibrium; at once terribly sad, and terribly funny. In recounting the story of Phoebe’s lunatic, who brings her family crashing down, Sal paints a wonderful picture of her best friend; a young girl whose wild imagination is rivalled only by her snobbish temperance. Sal recounts Phoebe’s story like a puzzle she’s piecing together for her Gram and Gramps – explaining the cryptic messages that were first left on the Winterbottom porch, and then the various investigations Phoebe and Sal conducted searching for the lunatic.

But Phoebe’s story has a deeper meaning for Sal, who draws parallels between the Winterbottom’s struggles and the events that led to her mother leaving Sal and her father behind to go on the very same Idaho road-trip Sal is currently undertaking with her grandparents.

‘Walk Two Moons’ is glorious. For a long time it feels almost like Sal’s story is a collection of vignettes as she recounts the many memories she has of her mother, the enigmatic Chanhassen Hiddle. So many things trigger memories for Sal, something as harmless as a blackberry pie holds a landmine of remembrance;

She pulled me to her and said to me - though it was meant for my father, I think - 'See? I am almost as good as your father!' She said it in a shy way, laughing a little. I felt betrayed, but I didn't know why.
After that dinner at Phoebe's where we had the blackberry pie, I started wondering about all of this. I was part of my mother - she was me and I was her - more than I was part of my father. So anything that was true of her was true of me. It was as if she had said, 'We're almost as good as your father,' and I wanted to say, 'We're as good as - We're better,' but why I wanted to say this, I don't know. I love my father.
It is surprising all the things you remember just be eating a blackberry pie.


But in teasing out the memories, and questioning the events that led up to her mother leaving home, Sal’s story begins to take shape. I wouldn’t say that ‘Walk Two Moons’ is ever a strictly linear story – though Sal’s recounting Phoebe’s lunatic tale is a fairly straightforward narrative, Sal explaining her own story takes many twists and turns. She’s a young woman who has gone through a lot of life changes in a very short amount of time – not least of which includes moving away from the only home she has ever known, a new shivery awareness of Ben Finney and the colossal hole her mother’s leaving gouged in her heart. It often happens that to understand one component of her changing world, Sal has to go back and look at old memories with a fresh perspective. This is a rather lovely facet of childhood-into-adulthood that Creech explains at Sal’s slow and steady pace.

Half-way through the book, you will begin to feel a niggling of sadness. Something is on the horizon, and the same way that Sal hears trees telling her to ‘rush, hurry’ or ‘slow, slow’ – so too will the sadness of this book start whispering. It’s a creeping kind of sadness – beautifully teased by Creech increment by increment. But there’s an overarching theme in the book, concerning the Greek myth of Pandora’s Box, a subject Sal’s class are studying in English. By the end, tears in my eyes, I decided that ‘Walk Two Moons’ was a literary Pandora’s Box in itself – that although there was incredible sadness and pain within, the slivers of hope are the lasting effect of Creech’s wonderful novel. The lessons Sal learns, her singing tree, blackberry kisses, the shivery feeling Ben ignites and Phoebe’s lunatic are all so beautifully hopeful that the sadness, though sharp, does not prevail – hope does.