'The Family Law' by Benjamin Law 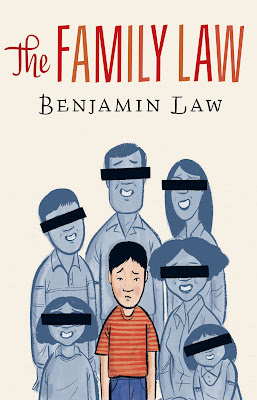 Meet the Law family – eccentric, endearing and hard to resist. Your guide: Benjamin, the third of five children and a born humorist. Join him as he tries to answer some puzzling questions: Why won’t his Chinese dad wear made-in-China underpants? Why was most of his extended family deported in the 1980s? Will his childhood dreams of Home and Away stardom come to nothing? What are his chances of finding love?

Hilarious and moving, The Family Law is a linked series of tales from a wonderful new Australian talent.

In 2010 I had the rare pleasure of loving a book I'd been anticipating for as long as I'd been stalking the author.

Benjamin Law is a freelance writer who first blipped onto my radar when I started reading his pieces in hipster-darling magazine, ‘Frankie’. He also contributes to ‘The Good Weekend’, ‘The Monthly’ and has written for ‘The Best Australian Essays’ and even appeared on ABC’s Q&A. I love him. He’s enviably witty, self-deprecating, and writes brilliant argumentative pieces with first-hand experience as his weapon of choice. I'd been looking forward to his novel debut for so long, and when ‘The Family Law’ came along in 2010 I was not in the least bit surprised by the novel’s brilliance. . .

‘The Family Law’ is a biography in 23 parts – as Law recounts mundane and extraordinary familial events through 23 short stories.

Benjamin Law is gut-achingly funny – so funny he’s sometimes freakin’ painful to read. But he’s at his funniest when describing his family and their weird, endearing mannerisms and quirks – like in ‘Baby Love’, in which he writes about his Cantonese mother’s horror-filled stories about raising Benjamin and his four other siblings.

Mum also said childbirth was unbearably, gratuitously painful. When I once asked her to compare and rate each of our births – which was easier, which was faster – she balked. ‘No birth is easy!’ she exclaimed. ‘Of course a man would ask that question. Men can’t even begin to imagine. Can you imagine a lemon coming out of your penis-hole? Yes, yes! That’s what it’s like! I'd like to see a man squeeze lemons out of his penis-hole. OUT OF YOUR PENIS-HOLE, BENJAMIN. You can’t even imagine, can you? A whole lemon – with the points on each end and everything, except this lemon has limbs. Out of your penis-hole. PENIS-HOLE.’


Going into ‘The Family Law’, I knew it would be a cackling-good read. I've been a big admirer of Benjamin Law’s sense of humour for years now, but actually it was the stories in which he balanced humour with introspection that stood out for me. Even more were the stories that started out lightly humorous, but masked much wider (often political) issues that really bowled me over. Benjamin Law sneaks up on you like that – he comes across as quite the joker, quick with the quips about being the only Asian not good at maths – but he’s masterful at using his personal anecdotes to ask big questions of the reader.

Now, I should also point out that Benjamin Law is gay, and a very vocal supporter of marriage equality in Australia. Law writes beautifully, self-deprecatingly and most importantly earnestly about realizing he was homosexual and coming out to his family. But I was sort of surprised to discover that it wasn’t his story about being gay in Australia that really struck a chord with me (though it did that too). In fact, it was the story ‘Skeletons’ that I think wonderfully illustrated Law’s talent for combining humorous anecdote with striking persuasion. In this short story, he talks about how his mother and her family moved to Hong Kong from Malaysia when she was fifteen-years-old, after they heard reports that ethnic Malays were murdering Chinese people. From Hong Kong, Law’s mother and father decided on Australia to escape the Chinese-run government after colonialism. After his parents arrived in Australia, gained citizenship and started a family, his mother’s family members started migrating to the land down under to start a new life too. As Law explains: “They let their visas expire, quietly and without ceremony” - they started having babies, taking out mortgages and opened a restaurant. And then when Benjamin was just a boy, the Australian Federal Police landed on their doorstep – raided the family restaurant, and arrested his uncles, and later returned to take his aunts and cousins to Villawood Detention Centre to await their fate. The family’s plight made national headlines, but in the end it did no good;

They left in stages, family by family, newspaper report by newspaper report. No matter how any applications were filed, petitions sent or campaigns established, nothing was of any use. Then, only weeks after my mother’s thirty-second birthday, she said goodbye to her two elderly parents at the airport. They were the last to leave, having been asked by the government to go voluntarily after their application for sponsorship was rejected. Mum was four months’ pregnant by then. When they left, her parents asked what the use of crying was.


After his mother’s sixteen deported family members left Australia (and all their worldly possessions behind with her), Benjamin’s mother developed a hording problem. For a long time she kept every family memento and school project; stacks of magazines littered his family home and as Benjamin puts it; “we were sentimental to the point where it became pathological.” His mother couldn’t let go, she kept the last physical links to her family for as long as she could. I love this story for a lot of reasons. Re-reading it now, when the ‘boat people’ debate has sparked all over again and Tony Abbott’s current buzz-word, ‘illegals’, is being repeated by every ignorant asshole, ‘Skeletons’ is a really beautiful and quiet story that puts a face and real heart into the whole debate. Benjamin Law’s family are not what the majority of Australian’s would consider to be the idea of queue-jumpers, and that’s what makes it so powerful and highlights Benjamin Law as a funny guy with a lot to say.

One of the great things about all of Law’s stories is the way he instantly hooks readers and draws them in. All his opening lines are a little bit kooky and fabulous. One of my favourites is from ‘Amongst the Living Dead’:

For as long as I can remember, I've thought about my mother’s death on a daily basis. This wouldn’t be such a strange exercise if she were actually dead, but the thing is, my mother’s alive – perhaps aggressively so.


Like I said, I first read and loved this book in 2010 – but it’s only recently that the book has returned to my shelf, after being passed around to every friend, family member and stranger on the street that I could convince to give Law’s debut a read. My copy of ‘The Family Law’ is now a little bit bruised and battered from being so lovingly read by so many. I’m so happy that Benjamin Law has his second book coming out next month, ‘Gaysia: Adventures in the Queer East’ – I can’t wait for his second outing, which will no doubt further my obsession with this heartfelt and humorous writer-extraordinaire. 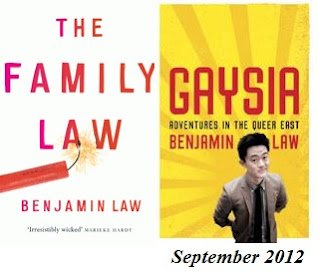