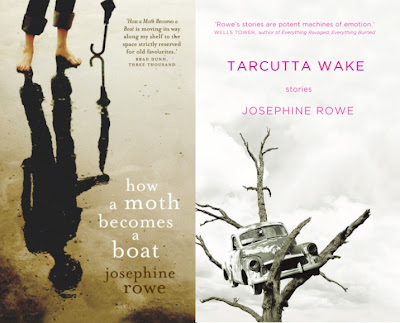 Anton Chekhov put it this way: “Tear your story in half and start in the middle.”

That’s probably the best way to describe micro-fiction, a particular literary style that favours brevity and everything left unsaid. It is a literary form with no particular word limit (can be 300 words, but some also consider a 1000-word piece to be micro-fiction) but it is most definitely a style that Australian short-story writer Josephine Rowe exquisitely excels at.

I stumbled across Rowe’s first collection of micro-fiction stories, ‘How A Moth Becomes A Boat’, at my public library. In this collection, Rowe takes a look at the little/big things and writes to the heart of them. She cuts to the quick and pries open stories to the tender morsel of truth. That she does so in fewer words than most is no mean feat; she doesn’t need florid prose to write something truly beautiful and magnetic. Take, for instance, my favourite short story ‘Moon’ which starts;


What I particularly love about this, and much of Rowe’s work, is that there are endless possibilities for interpretation. That is true of any written word, that the interpretation depends on the reader, but it seems truer in micro-fiction when so much is left unsaid that it opens up rooms within the reader, to fill in the parts of the story that are not on the page. To take away back story, character history and just write in the heart of a moment.

I was really upset when I attended Melbourne Writers Festival and found Rowe’s new short story book, ‘Tarcutta Wake’, on the bookshop shelves. Upset, because I realized too late that she was in fact talking about ‘Micro Fictions’ at MWF and by the time I’d found it, her event had already been and gone. It stings even more because ‘Tarcutta Wake’ is mesmerising. The blurb ties the stories together, by saying Rowe “explores the idea of things that are left behind”. This is also a nice description of Rowe’s micro-fiction style: ‘things that are left behind.’

Take, for instance, her short story ‘Brisbane’ which is a stunning example of in medias res (Latin phrase for ‘into the middle of things’). In medias res means starting in the middle, that old Chekhov chestnut of cutting a story in half to get to the juicy, pulpy centre. ‘Brisbane’ has the loveliest middle beginning;


And she had this way of swivelling her head round, like an owl to talk to you as she drove, except not like an owl because the skin of her neck creased up in folds and she looked so old when that happened, though she wasn’t, not then, and Luke would lean over and say Watch the road, Mum.

I love 'Brisbane', in particular, because of the immediate intimacy the reader feels to this young narrator. As though he's leaning in close to share a favourite memory with us, or picking up a tale where he just left off...

I’m absolutely in awe of Josephine Rowe and her micro-fiction; she cuts to the heart of a moment and leaves you at once wanting more but utterly, splendidly satisfied. I’ve already re-read ‘Tarcutta Wake’ and ‘How A Moth Becomes A Boat’ and each little story keeps changing in the revisit, and what seems so simple in theory is actually, vastly complex and beautiful under Rowe’s pen.