'The Fine Color of Rust' by P.A. O'Reilly 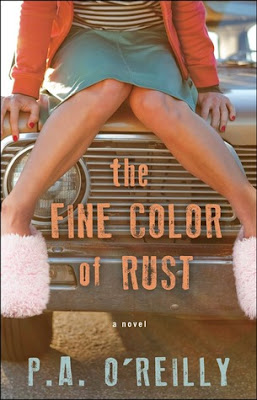 Single mother and dreamer Loretta Boskovic lives in Gunapan, a town lost in the scrubby Australian bush. She has fantasies about dumping her two kids in the orphanage and riding off on a Harley with her dream lover. Her best pal is a crusty old junk man called Norm. She needs a lawnmower; he gives her two goats called Terror and Panic.

Loretta′s a self-dubbed ′old scrag′, but she′s got a big heart and a strong sense of injustice. So, when the government threatens to close down Gunapan′s primary school, and there′s a whiff of corruption wafting through the corridors of the local council, Loretta stirs into action. She may be short of money, influence and a fully functioning car, but she has loyal friends. Together they can organise protests, supermarket sausage sizzles, a tour of the abattoir - whatever it takes to hold on to the scrap of world that is home.

Loretta Boskovic dreams of lantern-jawed man with rough stubble, spurs on his boots and a purring Harley-Davidson. In reality Loretta wears creaking $2 bras and underwear on its last elastane legs, she has an overgrown lawn, clunking car and two kids to raise on her lonesome after her no-good husband bolted three years ago. And the cherry on top of Loretta’s life is Gunapan – the rusted old town situated somewhere in the forgotten Australian bush; so far out of mind that the local council want to shut the school down, and a hush-hush land development is brewing under everyone’s noses.

But Loretta also has Norm, the kindly old junk man who is quite possibly the best friend she has ever had. There’s also a new mechanic in town, Merv Bull, who probably won’t stay single for long but Loretta can admire from afar until then. Then there’s Terror and Panic – lawnmowers in the form of goats. And the urge to chuck Jake and Melissa into an orphanage and skedaddle to Melbourne is coming less and less.

Maybe the Japanese are on to something with that word ‘sabi’ – “which connotes the simple beauty of worn and imperfect and impermanent things.” Maybe Loretta’s life isn’t so bad, it’s just a little bit ‘sabi.’

‘The Fine Colour of Rust’ is the stand-alone novel from Australian author, P.A. (Paddy) O’Reilly.

There’s been a trend in Australian publishing of late, a trend called ‘chook lit’. In recent years the otherwise struggling Aussie publishing scene has experienced a boom in rural romances, which glamorize and romanticize the Australian outback and country life. Kylie Northover wrote an article for 'The Age' back in April: “The novels tend to follow the narrative conventions of romance novels - attraction, a conflict, a drawn-out courtship - but they also feature feisty female protagonists who love the land and poetic portrayals of farming or outback life.” Now, the cringe-worthy ‘chook lit’ tag aside, I have actually enjoyed a few of these novels and my grandma can’t get enough of them. But the very notion of a ‘romanticized’ outback suggests a rose-tint being added to rust, which is why I so enjoyed Paddy O’Reilly’s ‘The Fine Colour of Rust’ as a sort of antithesis to the ‘chook lit’ trend.

I, and I’m sure many people, know Paddy O’Reilly primarily as a short story writer. She won ‘The Age’ short story competition in 2002 for ‘Snapshots of Strangers’, and her 2007 short story collection ‘The End of the World’ received much critical acclaim. I was really eager to read ‘The Fine Colour of Rust’, but I was in now way prepared for how much I’d love O’Reilly’s novel.

First and foremost, I want people to know that this book is funny. No – it’s hysterical. If this had been ‘chook lit’, then Loretta’s wish of a hunk on a Harley riding off with her into the sunset probably would have been the focus of the story. And Loretta probably would have been described as fabulously slender (even after two children) with hair that never frizzes in the outback heat. But it’s like O’Reilly is kicking red dirt in the faces of all those ‘chook lit’ books that so glamorize the rural outback town and life. She’s telling it like it is, stripping the ‘ideal’ of its varnish and, while not necessarily writing a horror story of ‘Wolf Creek’ proportions, she is most certainly de-glamorizing and adding a wallop of reality. I just loved and laughed at O’Reilly’s examinations of country life in this book – when it gets so hot the birds open their mouths and die of heatstroke, the local pool is shut down over summer to install a fancy café (don’t worry, it’ll be open in time for winter) and the male prospects are dismal. Even mention of a new bachelor in town has Loretta despairing, before she even meets him, because she knows the type of men who populate rural outback towns;


“What’s his name?” I ask Norm.“Merv Bull.”I shake my head. Only in Gunapan. Merv Bull sounds like an old farmer with black teeth and hay in his hair who scoops yellow gobs from his ear and stares at them for minutes on end like they’ll forecast the weather. The image keeps replaying in my mind as I finish wrapping the lemon tarts in waxed paper.“You can’t judge people by their names, Loretta, or you’d be able to carry a tune.”

The town of Gunapan has a real ring of truth to it, and even if you’ve lived (or live) in a similarly sleepy rural hamlet or you’ve just driven through one on your way to some place better, any Australian reading this will be able to picture Gunapan clearly in their minds. And with O’Reilly’s masterful prose and scene-setting, you’ll be able to taste the wind-kicked dirt in the back of your throat, feel the sun scorching your skin and hear the groan of a tin roof simmering in the heat.

I loved Loretta. She used to live in Melbourne before her lousy husband, Tony, dragged them to Gunapan. So she takes a more astute observation of the town and its residents; she knows how ridiculous and country-bumpkin they can seem, but she’s never cruel about their backwards ways (partly because she has succumbed to them).


I bet she never wears knickers with stretched elastic that slither down and end up in a smiley under each bum cheek.

I honestly, hand-to-heart, snorted my way through this novel. But funny as it is, ‘The Fine Colour of Rust’ also has real heart. Loretta is fighting a David & Goliath battle against city council that want to first shut their only school down, and then start a questionable land development – all of which Loretta is disputing, with minimal help from the local community. She’s also struggling to raise her two children, both of whom are hopelessly clinging to the thought that their dad will one day return. She does it all with a weary countenance but steely spine (no matter how much she claims otherwise);


It’s been three years since Tony left us. Three years in real time, and more like thirty years in looking-after-children time. I’m sure mothering years go even faster than dog years. I can feel my back turning into a question mark. Sometimes I catch myself hunched over the steering wheel or sagging in a kitchen chair, and I can imagine myself after a few more mothering years, drooling into my porridge in the retirement home. Come on, luvvie, they’ll say to me, sit up straight now, after all, you’re only forty.

Oh, gosh – I loved this book. I loved the ‘sabi’ concept of ‘The Fine Colour of Rust’ that translated so beautifully and funnily to Loretta’s outback struggles (which kicked ‘chook lit’ out the door). I loved the cast of country characters who wormed their way into Loretta’s heart, and mine. And I loved the town of Gunapan – rusted, rural and run-down as it seemed. This is a favourite book of 2012. 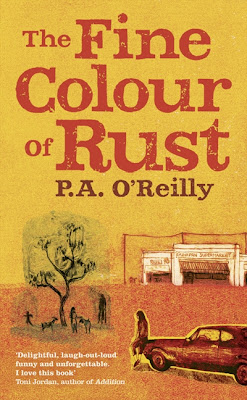