'A Monster Calls' A novel by Patrick Ness, from an original idea by Siobhan Dowd with illustrations by Jim Kay 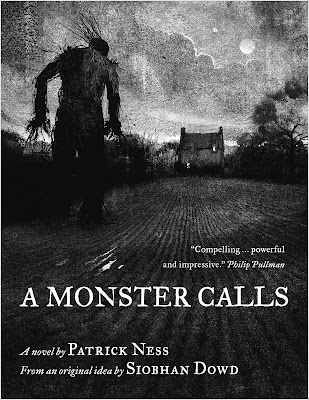 The monster showed up after midnight. As they do.

But it isn't the monster Conor's been expecting. He's been expecting the one from his nightmare, the one he's had nearly every night since his mother started her treatments, the one with the darkness and the wind and the screaming...

This monster is something different, though. Something ancient, something wild. And it wants the most dangerous thing of all from Conor.

It wants the truth.

The monster comes to Conor, shortly after his mum starts her treatments.

The monster says he will tell Conor three stories, and then he expects a fourth.

The fourth story must be Conor’s own, and it must be truth. His own truth . . .  the story he holds in a deep, dark cave within. The story he cannot tell, not ever. It is the worst story of all.

The monster knows Conor’s truth. He knows there will be pain in the telling. But he wants it anyway.

‘A Monster Calls’ is the 2011 illustrated middle-grade novel, written by Patrick Ness, illustrated by Jim Kay and with story by the late Siobhan Dowd.

This novel. This novel right here is sublime. It stuck with me, and long after I finished reading and crying I was still thinking on it, carrying Conor’s truth around with me, mulling over Ness’s beautifully heartbreaking words and the equally fascinating story-behind-the-story of Siobhan Dowd. 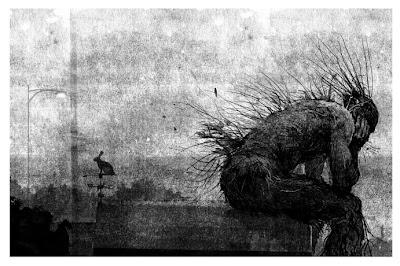 For one thing, I think this novel shatters a lot of misconceptions about ‘middle-grade’ reading. It feels like in recent years we’ve turned people’s opinions about Young Adult novels around – they’re now the blockbuster movie adaptations, the bestsellers, and so popular amongst older readers beyond the target-audience that books are re-released with ‘adult covers’ and there’s even an emerging sub-genre of ‘New Adult’. I feel like we’ve conquered what was previously a reading misconception where people thought ‘young adult’ meant ‘children’s’ and not for them if they were over a certain age (the literary equivalent of ‘you must be this ⌐ tall to read’). But I still think a lot of people are dismissive of novels for younger readers; what is often called ‘middle-grade’ or novels for ‘reluctant-readers’. I remember attending the Morris Gleitzman discussion for Melbourne Writers Festival, when he said there is a stigma attached to writing for children – because you don’t fit into the ‘mainstream’ (i.e.: adult fiction). And then there’s this misconception that a book for younger people, which is often shorter than young adult or adult novels must be “easier” to write.

Well, I think ‘A Monster Calls’ is the perfect antidote to anyone who thinks ‘middle-grade’ novels are lesser/easier/not deserving of their reading time.

For one thing, there is nothing easy about this book. Truly, it’s one of the toughest books I've ever read. Conor’s story grips your heart and never let’s go; it’s a constant squeeze, from beginning to end, and by the end you do feel wrung-out and emotionally bruised. Indeed, researching the story of ‘A Monster Calls’ also highlights that there was nothing easy in the creation of this wonderful book.

Siobhan Dowd (author of ‘Bog Child’ and ‘A Swift Pure Cry’) had the idea for what would become ‘A Monster Calls’ and discussed the project with her Walker editor, Denise Johnstone-Burt. Sadly, Dowd had been receiving treatment for advanced breast cancer for 3 years and in August 2007, she died from the disease (her Goodreads biography stresses that she “did not go gentle into that good night”). Denise Johnstone-Burt also happened to be editor to Patrick Ness, (author of ‘The Knife of Never Letting Go’) and she contracted him to write Dowd’s story. Jim Kay was contacted to illustrate, and interestingly enough; Ness and Kay completed their work on the book without ever meeting. Ness won the Carnegie Medal for ‘A Monster Calls’, as did Dowd who became the first author to be awarded the medal posthumously, and Kay won the companion CILIP Kate Greenaway Medal.

I also love that this book is full of illustrations. Indeed, some may think a middle-grade novel with pictures is a truly childish thing. But, once again, that’s not the case at all. Kay used “everything from beetles to breadboards to create interesting marks and textures” for the images in this novel. And they are truly horrifically breathtaking – at once fantastically creepy and sinister, but like the story itself there is beauty in the creep and the images are a wonderful companion to the equally chilling text.

Finally, what makes this middle-grade novel so compelling and utterly necessary reading is the story itself. Ness and Dowd are writing and whispering awful truths through the story of Conor’s struggle with this mother’s illness. So often in marketing, charity campaigning, TV shows and Lifetime movies the person ‘battling’ cancer is portrayed as a stoic ‘warrior’ who will claw and fight this ‘evil’, menacing disease. The truth, as Dowd’s story and Ness’s words illustrate, is far starker and, yes, uncomfortable. The truth is; dying is ugly. It hurts – not just the dying but those who will be left in their wake, left to live without them. Dying is messy. It’s brutal. It’s frustrating. It makes you want to claw at the ground, smash glass and scream into the night. But watching someone you love die? That’s just as ugly and brutal. Dowd and Ness have created a truer story of losing someone to cancer than a good deal of adult novels have ever done. That they did so in some 215-pages, with Jim Kay’s haunting illustrations acting as echoes of the feelings of our young protagonist is nothing short of remarkable.

I loved this book to bits. It hurt to read but it’s perhaps one of the most satisfying reading experiences I've ever had – where afterwards, though I felt battered and bruised, I also felt better for having read this story. As the Monster explains to Conor about the brutality of stories:

Conor blinked. Then blinked again. “You’re going to tell me stories?”
Indeed, the monster said.
“Well—“ Conor looked around in disbelief. “How is that a nightmare?”
Stories are the wildest things of all, the monster rumbled. Stories chase and bite and hunt.


To anyone who thinks there’s nothing to be gained from reading children’s books, for those who scoff at a story with pictures and less pages . . . I would recommend you read ‘A Monster Calls’ and be prepared to eat your words. 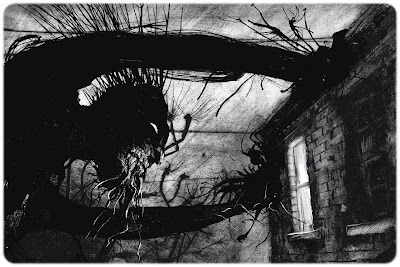