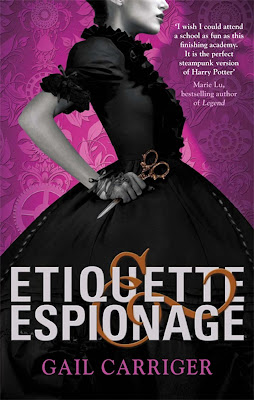 Sophronia is a great trial to her poor mother. Sophronia is more interested in dismantling clocks and climbing trees than proper manners-and the family can only hope that company never sees her atrocious curtsy. Mrs. Temminnick is desperate for her daughter to become a proper lady. So she enrolls Sophronia in Mademoiselle Geraldine's Finishing Academy for Young Ladies of Quality.

But Sophronia soon realizes the school is not quite what her mother might have hoped. At Mademoiselle Geraldine's young ladies learn to finish. . . everything. Certainly, they learn the fine arts of dance, dress, and etiquette, but they also learn to deal out death, diversion, and espionage - in the politest possible ways, of course. Sophronia and her friends are in for a rousing first year's education.

Some people see a dumbwaiter – Sophronia Temminnick sees a means to spy on her mother and the mystery lady called Mademoiselle Geraldine whom she’s taking tea with. And in the course of her spying, Sophronia learns that the entire Temminnick has had its fill of her wild ways and tomboyish tomfoolery – now they are desperate for her to go away to a finishing school. And there is no finer school than Mademoiselle Geraldine's Finishing Academy for Young Ladies of Quality.

Fourteen-year-old Sophronia is being carted away to become a lady – a thought she finds absolutely abhorrent. But from the moment she climbs into a beautiful carriage, she begins to suspect that she’s going to get a very different education to the one she, and her mother, initially thought. . .

She is introduced to fellow schoolmate, the dainty Dimity Ann Pllumleigh-Teignmott who has a family legacy at the Academy. Along for the carriage ride to school is Dimity’s younger brother, Pillover – who attends a Boys' Polytechnique where he’s training to be an evil genius. And then there are the unplanned travel companions - the Flywaymen who attack from above. They demand something called “the prototype”, and in the course of a quite vexing combat, Mademoiselle Geraldine is revealed to be not the actual Mademoiselle Geraldine but an Academy student sent on assignment called Miss Monique de Pelouse.

With the help of three novice students, and thanks to Sophronia’s ingenious, the Flywaymen are fought off and the foursome continues on to school . . . but the damnable Flywaymen are not forgotten, nor is this ‘prototype’ they were willing to die for.

When Sophronia gets to the Finishing Academy, she finds it is in fact a floating dirigible – constantly moving and requiring the help of a leaping werewolf (also a teacher at the school) called Captain Niall to board.

Now begins the real adventure – for this finishing school is unlike any other. Sophronia meets her roommates - Sidheag and Agatha, and unfortunately the senior student Monique de Pelouse who takes it upon herself to become Sophronia’s nemesis. Academy teachers include werewolves and vampires. And lessons include; History of social discourse, dancing, drawing, music, dress and modern languages, Fine Arts of Death, Diversion and the Modern Weaponries, the proper way to flutter eyelashes and the art of fainting.

When Sophronia manages to sneak her (steam-powered) mechanimal pet, Bumbersnoot, onboard the floating school, his dietary requirement of coal has Sophronia venturing into the belly of the dirigible and meeting the ‘sooties’ – including one handsome boy called Soap and his little friend, Vieve (short for Genevieve Lefoux!) who is mechanical-obsessed.

It’s a good thing Sophronia is learning a lot at this Finishing Academy (like a proper curtsey and how to fall into a pretend dead-faint) because the Flywaymen are back, and when Sophronia and her friends find out exactly what the ‘prototype’ is . . . she realizes they really will do whatever it takes to find it.

‘Etiquette & Espionage’ is the first book in Gail Carriger’s new young adult steampunk series, ‘Finishing School’, which is a spin-off and set in the same universe as her adult ‘Parasol Protectorate’ series (and includes a few lovely cameos for real crossover-power!).

I was a couple of pages into ‘Etiquette & Espionage’ when it hit me that this book reads exactly like Carriger’s adult series . . . and how absolutely wonderful that is! I think it’s the highest compliment to pay an adult fiction writer who crosses-over to the young adult readership, that their books lose nothing of the flavour and sass of their adult series – it’s a sign that they’ve dumbed nothing down, have retained their distinct voice and proven the versatility of their universe. Of course, I can imagine younger reader having to look up words like ‘dirigible’ and ‘prevarication’ – but, in all honesty, when I first started reading the ‘Parasol Protectorate’ series I had to get used to the steampunk-lingo and look words up too! The highfalutin language is intricate to Carriger’s steampunk world of Victorian England, and if kids have to look up words in a dictionary – that’s a good thing, not a hindrance!

Carriger’s language and narrative voice is as scrumptious as ever in this new series. She’ll throw out passages like this one, that are just melt-in-your-mouth perfection;


‘Whot, whot?’ the man muttered, as if hard of hearing.

He was very pale and boasted an unassuming moustache, which was perched atop his upper lip cautiously, as though it were slightly embarrassed to be there and would like to slide away and become a sideburn or something more fashionable.


That level of characterisation and description is perfect in a young adult series, and it really brings this world to life. Everything from the floating dirigible school to mechanimal Bumbersnoot is intricate and fabulous – setting up a fascinating stage.

Sophronia is one of the best new female protagonists on the young adult scene – hands down. She’s rough and tumble, loyal and inquisitive – and has so much room to grow as a fourteen-year-old sleuth-in-training. Although ‘sleuth’ isn’t quite right – in fact, the girls training at Mademoiselle Geraldine's Finishing Academy for Young Ladies of Quality can be anything they want, so well-rounded is their training.


She had to give her teachers credit: they were right to insist all pupils carry scissors, handkerchiefs, perfume and hair ribbons at all times. At some point she'd learn why they also required a red lace doily and a lemon.


The book-cover quote is from Marie Lu, who calls it “the perfect steampunk version of Harry Potter” – which irks me a tiny little bit. I know people have just replaced ‘magic’ with ‘steampunk’ and said it’s Hermione instead of Harry – but Gail Carriger has such a unique voice (and is a steampunk predecessor!) it’s just sort of insulting to reduce her to a JK Rowling writealike.

This is a refreshing new series with a female protagonist young readers can cheer on and look up to – she comes with a cast of fascinating friends who will no doubt keep this universe extremely colourful and interesting. ‘Finishing School’ is set 25-years before Carriger’s original adult ‘Parasol Protectorate’ series, but both new and old fans will want to leap onboard this new thrill-ride! 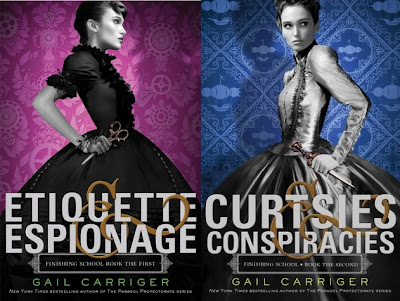