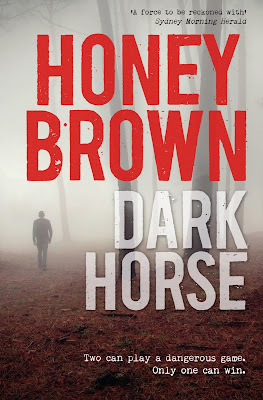 It's Christmas morning on the edge of the rugged Mortimer Ranges. Sarah Barnard saddles Tansy, her black mare. She is heading for the bush, escaping the reality of her broken marriage and her bankrupted trail-riding business.

Sarah seeks solace in the ranges. When a flash flood traps her on Devil Mountain, she heads to higher ground, taking shelter in Hangman's Hut.

She settles in to wait out Christmas.

A man, a lone bushwalker, arrives. Heath is charming, capable, handsome. But his story doesn't ring true. Why is he deep in the wilderness without any gear? Where is his vehicle? What's driving his resistance towards rescue? The closer they become the more her suspicions grow.

But to get off Devil Mountain alive, Sarah must engage in this secretive stranger's dangerous game of intimacy.

Sarah can’t spend Christmas at her mum and dad’s house, she just can’t. Still navigating the wreckage of her marriage, and the discovery that her husband of ten years had been having numerous affairs throughout their relationship, Sarah opts out of any festivities and instead decides to spend the day in the mountains. She saddles her prized black mare, Tansy, packs a picnic and a shotgun and sets out for the ranges that were once her office . . . this is one of the last times Sarah will be able to enjoy a Devil Mountain ride, since she’s also losing her horse trail business along with her house and husband.

Being out in nature is just what Sarah needed. To get away from the hurt and pitying looks of town residents who know her sad story. Sarah and Tansy enjoy one of their last days in the ranges together . . .  until the heavens open up.

A flash flood decimates the mountain, and Sarah barely escapes with her life and her horse – but the one way off the mountain is flooded. Sarah and Tansy are forced to take shelter at Hangman’s Hut, a property belonging to the long-dead bushranger Sid, which is currently under heritage restoration.

The rain pours, but Sarah is content – she has shelter, some provisions, a shotgun for safety and she spoke to her father before coming up the mountain. Help will come, when the rain stops.

But before help can arrive, a stranger does. Sarah hears a noise in the middle of the night, and finds a young man stuck in the mud and unable to help himself – he claims to have a busted knee, a dead phone and his car is stranded somewhere higher up on the mountain. His name is Heath, and he needs Sarah’s help – she’s his only hope.

Bloody brilliant – those are the only two words that come to mind in trying to summarize this book.

Brown sets the dreary, isolated scene – introducing readers to Sarah and Tansy, and pieces of the sad story that finds them alone on Devil Mountain on Christmas day. Sarah is still reeling from the disagreeable disintegration of her marriage, after discovering that her husband of ten years had been cheating on her for all of them. Sarah refuses to spend Christmas nursing a broken heart at her parent’s house and, knowing her property has been sold and horse trail business dissolved, she decides on one last trek to the ranges to say goodbye.

This Australian story is set somewhere in Tasmania – Devil Mountain being a dense rainforest similar to Gippsland or the Dandenong Ranges. It’s a primal, isolated setting, and for a long time Sarah and Tansy are our only characters – a woman and her horse battling the elements as they become increasingly deadly. It’s a wonderful introduction for Sarah; a clearly broken woman whose confidence has been rocked by her husband’s infidelities and her very foundations shaken by all she has lost in the divorce. And yet, readers are privy to Sarah’s sudden burst of strength and determination –battling against the elements to save herself, and her beloved mare. It immediately introduces us to a fascinating dichotomy in the character; that even if Sarah doesn’t believe in herself, readers know that deep down she still has an unbreakable spirit.

After Sarah survives the flash flood and takes shelter in Hangman’s Hut, Honey Brown introduces her (now trademark) “what if?” quandary – by throwing a stranded, injured young man into the mix. Sarah, already vulnerable in so many ways, is now stranded atop this mountain with a strange man. Their first meeting hardly assuages her worries;


Rain had slowed. The wind had died down. With the light gone from his forehead and shining from a different angle, the shadows on his face changed and his age was more apparent. He was in his late twenties. He had a youthful gleam in his eyes, liveliness even though he was cold and battered. From all accounts, you’d think he was revelling in the intensity, exactly like a young man would, everything an adventure. The smile he gave her emerged white from within the mud mask. ‘I promise I’m not Ted Bundy.’

‘The murderer who pretended to have a broken leg to lure women.’


From here the book takes its twisting turns and spirals into a primal thriller. And this is where Brown always succeeds in her books – she breaks her characters down to their animal natures; she leaves them vulnerable and backed into corners and then sees how they react.

I loved that ‘Dark Horse’ is a very tight, almost claustrophobic book with minimal cast – the spotlight being firmly on Sarah, Heath and the horse, Tansy (who is most definitely a character in herself!). ‘Dark Horse’ actually reads a bit like a play for its character-driven schematic, in which conversations between Sarah and Heath become intense double-talk and laden in secrets and silences and then switch in increments to something sensual but equally dangerous. Add mother-nature raging just beyond the hut’s doors and this becomes a very intense, masterful suspense story that does a whole lot with very little – two characters in an abandoned hut on the side of a mountain, and yet Brown’s book is a heart-palpitating page-turner.

What always works for me in Honey Brown’s books is that her characters and scenarios always feel very instinctual. I never read her books feeling like she, as the author, is pushing the story or manipulating the characters – their actions always feel very natural and there are so many times when a character’s response is in keeping with what I believe I would do in such a situation. And that’s the mark of a truly masterful storyteller – when you can’t even see who’s pulling the strings because you’re so engrossed by the play unfolding before you.

I refuse to spoil this book for anyone; because there are moments that are gaspable and all the more fun for Honey Brown’s sideswipes. I will only say that she well and truly got me – perfect sucker punch right to the gut, and I loved every twisting moment of it.

I became a Honey Brown devotee back with ‘The Good Daughter’ and ‘Red Queen’ – and of course she suckered me into last year’s release, ‘After the Darkness’ – so I really shouldn’t be surprised that ‘Dark Horse’ is another killer thriller from the new (red) queen of Aussie suspense . . .  but I am. This is another book that had my heart racing and palms sweating – Honey Brown even managed to elicit audible gasps from me. And, as always happens when I get to the end of a Honey Brown book, the second I read the last page I wanted another of her novels to consume. I’ll just have to be content to wait, and know that whatever she writes next will no doubt be another wholly satisfying affair.