'The 5th Wave' by Rick Yancey 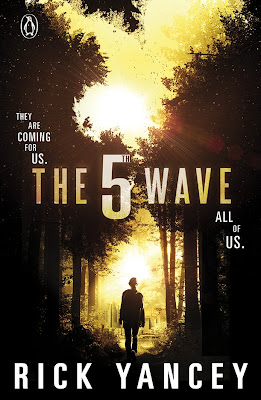 From the BLURB:
The 1st Wave


Took out half a million people.


Put that number to shame.


You can't trust that people are still people.


No one knows. But it's coming.


On a lonely stretch of highway, Cassie runs. Runs from the beings that only look human, who have scattered Earth's last survivors.
To stay alone is to stay alive, until she meets Evan Walker. Beguiling and mysterious, Evan may be her only hope.
Now Cassie must choose: between trust and despair, between defiance and surrender, between life and death.
Cassie Sullivan has grown used to living with regret. She regrets that her family didn’t panic more before the 1st Wave came, that they actually thought some intergalactic peace-keeping might happen. She regrets not telling Ben Parish, high-school heart-throb, how she felt about him these many years and that she didn’t even attempt to make him know she existed . . . now he’s dead like all the others. She regrets that her family – mum, dad and little brother, Sammy – didn’t get out sooner, after the 2nd Wave came. She regrets not insisting that she help her father, as he buried her mother.She regrets letting Sammy get on that bus with the soldiers.And she regrets leaving her father at the Ash Pit, ambushed by those same soldiers and left for dead.Cassie may be living with her regrets, but she’s also living with a plan – to get Sammy back, no matter what. ‘The Fifth Wave’ is the first book in a new sci/fi young adult series from Rick Yancey. The first clue that ‘The Fifth Wave’ is not your typical sci/fi-dystopian YA, should be that Rick Yancey is not your typical author to be joining the genre-trend bandwagon. Yancey is actually author of ‘The Monstrumologist’, which was awarded the 2010 Michael L. Printz Honor Award for excellence in young adult literature. In other words, this is not an author who was looking to be ‘the next big thing’ by following the lead of other YA best-sellers. And the second clue that ‘The Fifth Wave’ is anything but typical YA comes within the first four chapters, when Yancey proves his “kill your darlings” ease – establishing a world that’s more blood-thirsty than ‘The Hunger Games.’ Forget examining totalitarian regimes where absolute power corrupts, absolutely – Yancey’s world isn’t about the dystopian ‘corruption of man’ trend. Instead, Yancey’s world is our world; that has been conquered by extra-terrestrial hordes. In this world, humans have been quickly shifted to bottom of the food chain and the few of us who remain are just waiting for the next cleansing . . . the 5th wave, to put us in league with the extinct dinosaurs. Part of the novel is told from the perspective of Cassie Sullivan – one of the lucky (depending on how you look at it) humans who survived Waves 1–4, along with her father and little brother . . . until a mobilisation of the army sent her survival skills into a tailspin and saw her brother kidnapped and father murdered. Now Cassie is solely focused on getting Sams back, at any cost.

“How I know what?” My eyes were tearing up. His crumpled-up body wiggled in my vision like an image in a fun-house mirror. But I didn’t dare release my grip on the rifle to rub my eyes.

That made sense. Or did it make sense because I wanted it to make sense? Maybe he dropped the gun to get me to drop mine, and once I did, the second gun he was hiding under his fatigues would come out and the bullet would say hello to my brain.This is what the Others have done to us. You can’t band together to fight without trust. And without trust, there was no hope.

How do you rid the Earth of humans? Rid the humans of their humanity.

Cassie’s plan has a wrench thrown in when a ‘Silencer’ has her trapped and shot beneath a car on an abandoned highway . . . And that’s really the most I can talk about the plot; because Yancey throws so many ‘OH MY GOD’ curveballs and fake-outs throughout this novel, and to spoil them would be a serious injustice. Save to say; there’s more than just Cassie narrating this story. Yancey adheres to one common trope of the recent YA trend for these books; and that is in the romance. Except Yancey blows love-triangles and star-crossed-lovers out of the water and offers a passionate conundrum that’s sure to add fuel to the flames of the next two books in the series. Now, I've read reviews that compare this book to Stephenie Meyer’s ‘The Host.’ I really can’t speak to that since I couldn’t stomach that book beyond the first chapter . . . but I have seen the movie and all I can say is ‘no.’ They don’t compare because Yancey is in a league of his own. And if you need further proof, it’s in the fact that Meyer has stated she has outlines for the sequels and has done some writing on them, but she has some qualms since ‘The Host’ universe is a "dangerous place" where characters might die, and she is not sure if she wants to kill them off. Puh-lease. Yancey knows better than that – he knows how to write high-stakes, heart-palpitating action and that sometimes a body count is absolutely necessary when you’re writing about invading alien hordes. If you need further reason to read this, how about the fact that it has been longlisted for the Australian Inky Awards, Silver Inky? If you don’t know; that’s a book award for books that kids actually want to read. And I can totally see why Yancey has earned the admiration of YA readers for ‘The Fifth Wave’. Here is a scary book that forces moral conundrums on its young protagonists and throws readers into the thick of an alien invasion. Absolutely superb, addictive-reading . . . I need the second book, pronto!