'Vango: Between Sky And Earth' Vango #1 by Timothée de Fombelle 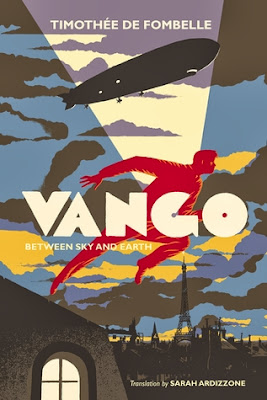 A gripping mystery-adventure set in the 1930s interwar period about a character desperately searching for his identity.

Raised by a strange nanny in Sicily, Vango grows up with one friend, a priest Zefiro, who lives in a monastery hidden from sight. On reaching adulthood, Vango decides to follow in Zefiro s steps, but at the moment he is taking his holy orders at Notre Dame in Paris, he is falsely accused of a crime and has to go on the run. This is a breathless and highly cinematic story that follows Vango travelling by Zeppelin across Europe from Stromboli to Nazi Germany, from Scotland to the Soviet Union, climbing the rooftops of Paris, crossing the paths of arms traffickers, crooked policemen, Russian spies and even Stalin.

Outside Notre Dame, a group of men who were about to become ordained priests are lying, facedown on the cobbled stones. A group of policemen, led by one superintendent Boulard are making their way through the crowd, searching for one 19-year-old man;

Just then, one of the seminarians stood up. He wasn’t very tall. His robe was weighed down with the rain. His face was streaming. He turned full-circle in the midst of so many bodies, none of which moved. On every side, plain-clothes policemen emerged from the crowd and began to advance towards him. The young man bought his hands together as if in prayer, then let them fall to his sides. The clouds in the sky were reflected in his eyes.

“Vango Romano?” the superintendent called out.

Thus begins Timothée de Fombelle’s book, ‘Vango: Between Sky And Earth.’ Originally published in 2010 in France (‘Entre ciel et terre’) the English translation of the book (by Sarah Ardizzone) has only just been released this year.

The book begins in 1934, with Vango the main suspect in the murder of a priest. After the confrontation at Notre Dame, Vango is saved by a passing Zeppelin and goes on the run. Vango’s bid for escape will see him cross the skies to Germany and beyond – and as his tale unravels and intersects with those around him, his story backtracks to 1918 and the Aeolian Islands where he and his nurse found refuge as survivors of a shipwreck. And then jumping ahead to 1925, and the discovery of a secret island called Arkudah – then to 1929, when Vango found himself aboard the Graf Zeppelin for the World Tour, and met a young Scottish heiress who he’d never be able to forget … and, finally, circling back to the 1930s, as Vango comes to realise his life-long paranoia may be grounded in a frightening reality.

Timothée de Fombelle was a playwright before becoming an author. In 2006 he released his debut novel, the first book in children’s series ‘Toby Lolness’ and met great success – the ‘Toby’ books have since been translated into 29 languages and the first book is being made into a movie. With his second series, ‘Vango’, de Fombelle has once again proven himself – here is a breathtaking new series woven around an international murder-mystery, peppered with historic characters, grand events and featuring one of the most fantastically compelling protagonists.

I knew after about three pages that ‘Vango’ would be a favourite book of 2013 for me (never mind that it was first published, technically, in 2010) and I was 100% right. Timothée de Fombelle’s playwright roots shine throughout the book, but nevermore so than in the exhilarating and beautifully staged opening chapter. Notre Dame de Paris setting, police charging through a crowd who had gathered to watch young men become priests – and an accused murderer among them. I knew I was hooked because as the lovely character of Ethel notes; "I like the idea of a priest who climbs cathedrals to escape the police."

Even before Vango scaled the side of Notre Dame to escape police superintendent Boulard by hitching a ride on a passing Zeppelin (!) de Fombelle had me hooked even with the minor details in such an extravagant set-up; like young Scottish miss, Ethel, who was in the crowd watching Vango being ordained with a tear in her eye.

From that first explosive opening chapter, de Fombelle plays with pace and flashbacks like a true virtuoso. Now a fugitive, Vango starts backtracking through his life to pinpoint when the danger began – he has been forever paranoid, always afraid of being followed or monitored, and now recent events have proven him horribly right.

Part of the charm of  ‘Vango: Between Sky And Earth’ is how de Fombelle has manipulated history for his story. The author plucks historic figures from the depths of time and turns them into characters – like Hugo Eckener (commander of the Graf Zeppelin) who de Fombelle has written as a great friend of Vango’s (they met on the 1929 World Tour) and as a quick-witted, if quiet protestor to Hitler’s increasing regime. There are also snippets of story told from the perspective of young girl, Svetlana, who turns out to be Svetlana Alliluyeva – Josef Stalin’s daughter. These historic guess-who’s never felt clunky, but were a wonderfully natural mix in the storytelling.

And the storytelling is marvellous. From a mysterious young woman called simply The Cat, to Russian spies and hidden islands – ‘Vango’ is like no other story you would have ever read. It’s like a hyper-coloured espionage, spy-thriller with backwards-and-forwards timeline, a charmingly paranoid protagonist, some heart-clutching romance and a cliffhanger you’ll happily topple into.

I was so happy to get to the end of this book and discover that, despite the sequel ‘Un prince sans royaume’ having been released in France back in 2011, the English-translation of ‘A Prince Without a Kingdom’ is coming in 2014. Thank God! 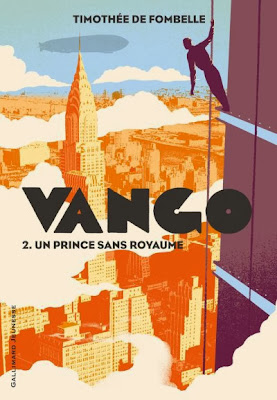