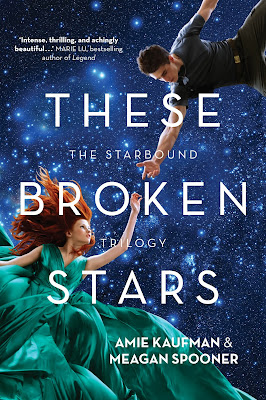 It's a night like any other on board the Icarus. Then, catastrophe strikes: the massive luxury spaceliner is yanked out of hyperspace and plummets to the nearest planet. Lilac LaRoux and Tarver Merendsen survive. And they seem to be alone.

Lilac is the daughter of the richest man in the universe. Tarver comes from nothing, a young war hero who learned long ago that girls like Lilac are more trouble than they're worth. But with only each other to rely on, Lilac and Tarver must work together, making a tortuous journey across the eerie, deserted terrain to seek help.

Then, against all odds, Lilac and Tarver find a strange blessing in the tragedy that has thrown them into each other's arms. Without the hope of a future together in their own world, they begin to wonder - would they be better off staying in this place forever?

Everything changes when they uncover the truth behind the chilling whispers that haunt their every step. Lilac and Tarver may find a way off this planet. But they won't be the same people who landed on it.

Lilac is the daughter of the richest man in the universe. After her mother’s death, Lilac’s father became somewhat paranoid and protective of his only child, and in the past he has shipped a paramour of Lilac’s off to the frontlines of war, and surrounded her with beautiful female chit-friends who actually double as spies and bodyguards.

But one day while aboard the Icarus Spaceship, at another mindless soiree, Lilac meets Tarver – the poor son of a creative family, recently turned military hero and poster-boy for the war effort. She is instantly intrigued by his gallantry, and the fact that he doesn’t seem to recognise who she is. But as soon as Lilac realises her interest in the handsome young soldier, she turns a cold shoulder on him, lest her entourage report back to her father.

Tarver, meanwhile, cannot believe his stupidity at not recognising Lilac LaRoux – and he’s not too surprised that she has no interest in him, a lowly soldier.

But then tragedy strikes the Icarus – the spaceship is going down, and majority of its passengers and crew with it.

In the terrified and panicking crowd Tarver spots Lilac, and gets her to an escape pod. Together they manage to get off the doomed spaceship, and land on a deserted planet …

But while waiting for help that’s sure to come (no doubt Mr LaRoux will move heaven and the universe to get to his only daughter) Lilac and Tarver start exploring this planet, and make some horrifying discoveries. Not least of which is the fact that their feelings for one another cannot be ignored.

‘These Broken Stars’ is the young adult space-thriller-romance novel from Amie Kaufman and Meagan Spooner (bonus points factoid: Meagan lives in Washington DC, while Amie is a Melbourne girl!)

Never before has the tag ‘Space Opera’ been more aptly applied than to this, the first novel in the ‘Starbound’ series. It starts with a ‘Titanic’-esque disaster, introduces star-crossed lovers from vastly different backgrounds and then veers into a survival thriller of epic ‘Cast Away’ proportions (only, less beard and volleyballs – more sexy soldier and savvy princess).

Told in alternative perspectives from Lilac and Tarver (with chapters broken up by a post-survival interrogation of Tarver) ‘These Broken Stars’ is the young adult book everyone is buzzing about, and for darn good reasons. From their first meeting it’s pretty hard not to fall for Lilac and Tarver, and get wrapped up in their slow-burn love story;


Maybe he's seated now, hiding among the other guests. My eyes sweep across the booths again, this time examining the patrons more closely.They're all packed full of people. All except one. My gaze falls on a girl sitting alone in a booth, watching the crowd with detached interest. Her fair, flawless skin says she's one of them, but her gaze says she's better, above, untouchable.

She's wearing the same hue as a navy dress uniform, bare shoulders holding my gaze for a moment—she sure as hell wears the color better than any sailor I know. Hair: red, falling down past her shoulders. Nose: a little snub, but that makes her more pretty, not less. It makes her real.

Pretty's not the right word. She's a knockout.

Something about the girl's face tickles at the back of my mind, like I should recognize it, but before I can dig up the connection, she catches me looking at her. I know better than to mix with girls like her, so I don't know why I keep watching her, or why I smile.


But what’s really great is that Kaufman and Spooner then decide to take all the usually boring stuff out of the equation (basically, if they were editing James Cameron’s ‘Titanic’, there’d have been none of that first hour with Rose eating cake with her uptight mum and Jack howling from the lower decks) - Kaufman and Spooner cut their story right to the chase and turn a sweet romance into a sizzling survival story as we follow these two shipwrecked sweethearts to an isolated planet, filled with terrifying secrets.

I admit, in the beginning, I thought the authors were writing an awful lot of clichés. Poor boy intrigued by rich (beautiful) girl, star-crossed socioeconomic hurdles put before them … but then Kaufman and Spooner pretty much knock all those tropes on their heads. Lilac is a tech-savvy woman whose adept at playing dangerous societal games, while Tarver is fish-out-of-water in the upper-hierarchical circles, but is back in his element mapping the rough terrain of this lonely planet. I loved the setup, the unconventional protagonists and how a lot of the book is Lilac and Tarver sinking deeper and deeper into their romance.

I only had a very few issues with the book. The world-building isn’t brilliant (I’d actually have liked more set-up about the mentioned war a little earlier) but I’ll also assume that Kaufman and Spooner have left plenty of wriggle-room for universe exploration in subsequent ‘Starbound’ books (the next of which is ‘This Shattered World’, coming 2014). I also wasn’t too sure about the chapter-break interrogation interview with Tarver, which took me out of the story a bit and slackened the tension – the interrogation is all about the Icarus crashing, and Tarver and Lilac’s subsequent movements on the isolated planet … meaning readers know from the get-go that they survive. Sure, Kaufman and Spooner played a lot more with the interrogation thread later on, but for the first 90% of the book I was unsure.

No wonder Amie Kaufman and Meagan Spooner have got a hit on their hands with this space-opera young adult thriller. It’s the must-read, much talked about new series to come out of 2013, and I highly recommend jumping on the bandwagon early. 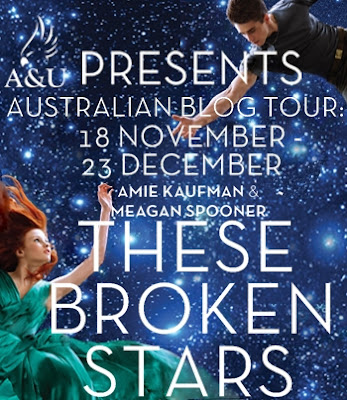 'These Broken Stars' is now available at all good bookstores.
Posted by Danielle at 7:59 AM