'The Impossible Knife of Memory' by Laurie Halse Anderson 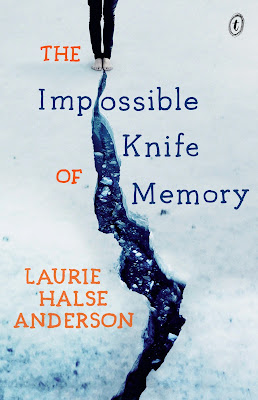 For the past five years Hayley Kincain and her father, Andy, have been on the road, never staying long in one place as he struggles to escape the demons that have tortured him since his return from Iraq.

Now they are back in town where he grew up so Hayley can go to a proper school. Perhaps, for the first time, Hayley can have a normal life, put aside her own painful memories, even have a relationship with Finn, the hot guy who obviously likes her but is hiding secrets of his own.

Will being back home help Andy's PTSD, or will his terrible memories drag him to the edge of hell, and drugs push him over?

‘The Impossible Knife of Memory’ is the new young adult novel from Laurie Halse Anderson.

I finished reading this book the same week that Australian soldiers completed withdrawal from the Afghanistan Uruzgan province. It was an unsettling overlap in my reading – when majority news outlets were reporting positively on the withdrawal, but none were mentioning the road ahead for the returning soldiers. This is the crux of Anderson’s story, which follows eighteen-year-old Hayley Rose who has recently moved into her dead Gramma’s house with her veteran father.

Hayley’s Dad did two tours of Iraq and Afghanistan; a single father since the tragic death of Hayley’s mother, he left his young daughter in the care of his “base bunny” girlfriend, Trish, who was an alcoholic and eventually abandoned the family. When he became a civilian again, he and Hayley spent a few years travelling in his big-rig truck where he homeschooled and “unschooled” his daughter. But now senior year is approaching and Hayley’s Dad is adamant that they put down roots and she start thinking of college.

It’s sounds all good in theory, but Hayley’s dad isn’t coping with civilian life. The quiet unsettles him, leaves too much room for dark memories and he wakes up screaming. Since returning to his hometown, he’s also fallen in with the wrong sorts of friends and finds solace in drugs and drinking. Hayley leaves for school most days terrified of what she’ll come home to.

No one should be surprised that it’s Laurie Halse Anderson tackling this troubling topic of PTSD and the repercussions of a decades’ worth of war, particularly its impact on the families of those who served. This is the same Anderson who broke out with ‘Speak’ in 1999, about a girl’s struggles to speak about the rape that so traumatized her. In 2007 she wrote ‘Twisted’, which examined modern masculinity and her 2009 book, ‘Wintergirls’ was about two friends with eating disorders and a competitive streak. Laurie Halse Anderson has the unnerving knack of addressing confronting topics in the most tender and understanding of ways. ‘The Impossible Knife of Memory’ continues Anderson’s preoccupation with writing about the very things society has yet to confront in a meaningful way, and she does it beautifully … hauntingly;


More months in the hospital, then the big welcome home, dog tags turned in, army days over. (That was before we knew about the fraying wires in his skull. Before we knew that he could turn into a werewolf even if the moon wasn’t full.)


Hayley Rose is our narrator. A prickly teenager to be sure, she believes people fall into one of two categories; freaks and zombies. She’s smart and acerbic, with a penchant for correcting her teacher’s teachings and non-conforming to the zombie-horde at school. She’s brilliant. But the burden of caring for her ailing father who doesn’t want anyone’s help has perhaps turned her too bitter, too young.


The tang of gunpowder lingered in the house, so strong that I wondered if he’d opened a couple of shells for the hell of it. Freakish visions crowded in – Dad smearing gunpowder on his face for camouflage, Dad pouring a thick circle of gunpowder on the floor, sitting in the middle of it and lighting a match, Dad … The only way to get rid of them was to open all the windows and clean the table.

How many of the girls in my gym class had to clean up gunpowder and barrel oil after school?


And she’s scared. Scared for him and scared by the thought of losing the last member of her family. Her only friend is Grace, a beautiful girl with her own family troubles. But then Grace introduces Hayley to Finn, and things start changing.

Finn was on the swim team, but quit. When he tries resurrecting the school newspaper and recruiting Hayley as a journo, the two keep colliding and snarking at one another – until they actually start chipping away at one another’s armour and finding solace.

Something Anderson does so well is not writing a teen romance for the sake of it. Finn and Hayley give one another momentum, and both of them are struggling with very different family issues (as is Grace). Just as Hayley’s father starts receding from the world, and damning himself by refusing help from anyone – Hayley is experiencing the opposite, instead realising the benefits of having someone in your corner who you can be real with.

Hayley is our narrator, but interspersed throughout her story are recollections of unbidden memories, and slices of narration from her father. It’s in these moments that Anderson really, truly shines and breaks your heart a little and continuously. The PTSD reflections of Hayley’s father are not overblown – they’re snippets of horror and all the more impacting for their rarity in a novel that’s all about Hayley and her father living in the aftermath. Some of Anderson’s reflections in these parts are breathtaking;


Odysseus had twenty years to shed his battle skin. My grandfather left the battlefield in France and rode home in a ship that crawled across the ocean slowly so he could catch his breath. I get on a plane in hell and get off, hours later, at home.


I’m already calling this as one of my favourite books of 2014, and one that will be rightfully lauded come awards-season. Here is a novel full of cutting tenderness, quiet reflection interspersed with a young woman’s rage and crippling inability to help her suffering father. It’s beautiful and haunting, as all Laurie Halse Anderson books tend to be.