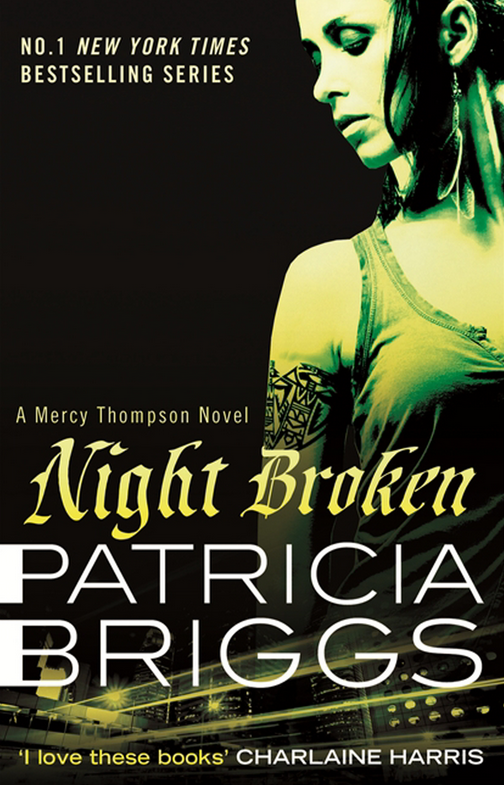 An unexpected phone call heralds a new challenge for Mercy. Her mate Adam's ex-wife is in trouble, on the run from her new boyfriend. Adam won't turn away a person in need, but with Christy holed up in Adam's house, Mercy can't shake the feeling that something isn't right.

Soon, Mercy learns that Christy has the farthest thing from good intentions. She wants Adam back and will anything to get him, including turning Adam's pack against Mercy.

On top of this, there's an even more dangerous threat circling. Christy's ex is more than a bad man - in fact, he may not be human at all. As the bodies pile up, Mercy must put her personal troubles aside to face a creature with the power to tear her world apart.

The story kicks-off with an unexpected phone-call from Adam’s ex-wife, Christy, begging him and the pack for help and shelter. Apparently, Christy got tangled with the wrong man and now she’s running scared after she suspects he killed another of her suitors.

Mercy is reluctant to let Christy into her home, and back into the pack’s fold – especially since many of the female werewolves who hate Mercy still consider Christy a good friend, and would welcome her back as their Alpha’s mate. But Christy is Jesse’s mother, and Mercy is secure enough in her and Adam’s relationship to, begrudgingly, let his ex into their home.

But it’s not just Christy’s jealous lover causing a stir for Mercy and the pack. One of the Fae has come knocking on Mercy’s door, demanding the Walking Stick be returned … the same Walking Stick that Mercy recently gave to her Coyote for safe-keeping. If she can’t get it back, the Fae promise retribution for Mercy and those she holds dear.

Straight-up: I’ve given this book 3.5/5 and that is the lowest ever rating I’ve ever given a ‘Mercy’ book … and I’m a bit shocked, to be honest.

I was so looking forward to this book, perhaps even more than usual, because in March last year I interviewed Ms Briggs and threw out the idea of (finally) meeting Adam’s ex-wife, Christy, and Briggs actually confirmed that my sneaking-suspicion would come to fruition in ‘Night Broken’. Why was I so eager to meet Christy, when Mercy, Adam and even Jesse seem to have a very low opinion of her? Mercy has, once or twice, reminisced about the days when Adam was married to Christy and she observed their rollercoaster relationship from her trailer. Mercy has also commented, rather bitterly, on what she perceives to be Christy’s short-fallings as a mother where Jesse is concerned. But I was interested to see her because Christy sounds so different from Mercy in everything from looks, to personality and backbone (namely, that Mercy has one). I think you’re always intrigued by ‘the ex’, particularly for the sake of comparison, and I was sort of hoping that Mercy would poke that wound (as I would) of asking Adam how he could have such wildly different tastes in his two wives. Also; now that Adam and Mercy are married and their relationship rock-solid, it’s always nice to keep throwing a hurdle or two their way – not for the sake of wrecking their romance, but certainly to keep it interesting (the pitfalls of boring after happily-ever-after that I found in Jeaniene Frost’s ‘Night Huntress’ series tells me this is a necessity).

So, was it that the Christy storyline didn’t live up to my high hopes? Yes, and no. It was perversely pleasing to read that Christy is as awful in reality as she is in Mercy’s anecdotes and memories. But I don’t think this storyline ever reached climax or came to a satisfying resolution … I wanted Mercy to have an Alpha moment of staking her claim and putting Christy in her place, and it never quite got there for me. At the very end Briggs includes a bizarre mention of a prank Mercy pulled against Christy, but it’s mentioned at the worst possible time and held no relevance. Perhaps Christy will be sticking around for book #9, in which case this is an ongoing power-struggle and that’s fine.

So was it the ‘whodunit’ mystery plot at the centre of this book? Yes, and no – again. Briggs relies on obscure mythology as the basis for her Big-Bad in this book, and it’s another one of those stories that has a complex retelling attached and is so far-flung and obscure that it doesn’t quite strike the right note of fear in me the same way that vampires or rogue werewolves do, for example.

The Big-Bad story, converges with Mercy’s issues with the Fae and Walking Stick, which also mean that a visit from Coyote is included in this book … and Mercy also gets to meet one of Coyote’s other children (a sort-of brother to Mercy) a man called Laughingdog. This is a new character we’re introduced to, and he’s a fabulous new edition – a coyote walker like Mercy, with Native American heritage and a serious hatred of their “father” Coyote. When she meets him, Laughingdog is actually incarcerated over a situation that Coyote orchestrated to get out-of-hand, not to mention good ol’ Coyote has gifted Laughingdog with foresight;


He opened his mouth, then shook his head. “It’s not that kind of foresight. I don’t get dates, just possibilities. And if I did know, I don’t hate you enough to tell you.”

“She doesn’t know any other coyote walkers,” said Honey. “She is married to a man who will be young a hundred years from now. She wants to know that she is not going to leave him tied to a woman who will slowly die on him.”

Laughingdog looked at me. “I don’t know. Most walkers are like humans – most are mostly human anyway these days. Coyote doesn’t walk this ground much anymore.” He smiled a little, but it wasn’t aimed at me. “Most of Coyote’s children don’t have to worry about a long life, anyway. A fool and his life are soon parted, you know.”


I really like Laughingdog; he’s cheeky and a little bit lost, and I like that he’s coming into the fold.
So was my 3.5 about the emotional/romance elements in this book? Nope. Mercy and Adam are still the wonderful Mercy and Adam duo I’ve come to know and love – they have heat in this book (as always), poignancy and their relationship feels more rock solid than ever. Love them, no issues there.
So what was it that didn’t quite work for me in this book?

Well … it felt a little like filler, because by book’s end nothing has really changed.

We’re now eight books into this series, and while there was huge upheaval when Mercy finally chose Adam over Samuel, and entered into the pack as his mate … there hasn’t been a great deal of change since then, some four odd books ago. I’m not saying I need Mercy to be barefoot and pregnant with Adam’s baby to feel like she, and this world, have forward-momentum. But I do need some changes to start happening to feel like the ‘Mercy Thompson’ books aren’t just self-contained mysteries, but rather a constantly changing universe in which the characters are three-dimensional and constantly changing.

I can’t help but feel change may need to come in threats to those she loves, more so than more Mercy life-or-death gambles.

All in all: I enjoyed this book, as I do all ‘Mercy Thompson’ instalments, but at eight books into this beloved series I need to start reading higher stakes and real change. 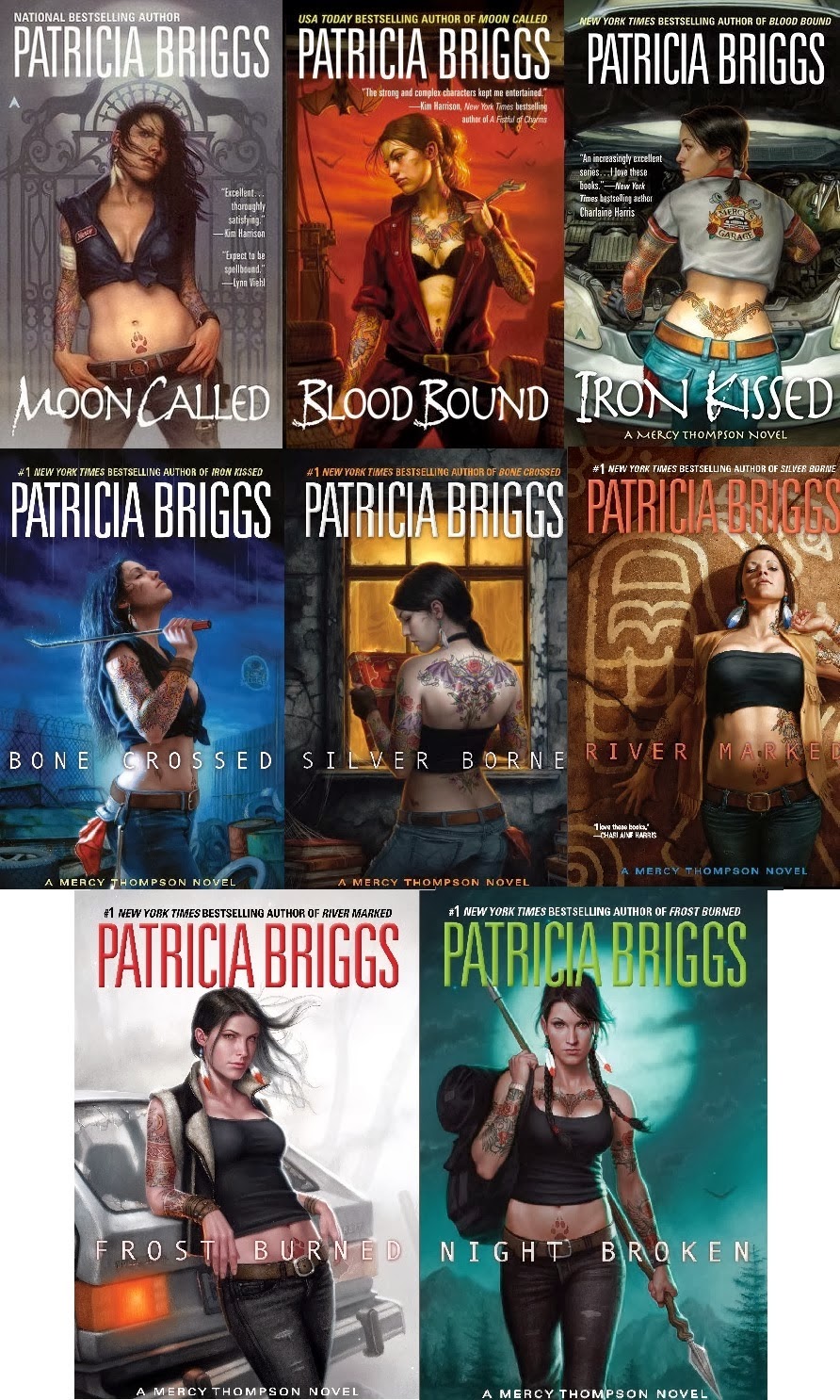