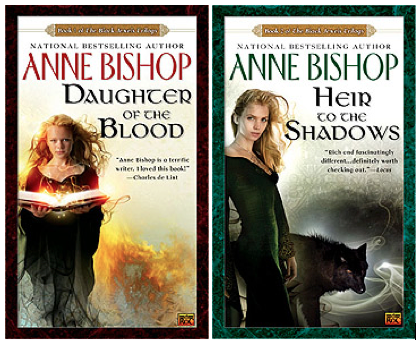 The Dark Kingdom is preparing itself for the fulfillment of an ancient prophecy--the arrival of a new Queen, a Witch who will wield more power than even the High Lord of Hell himself. But this new ruler is young, and very susceptible to influence and corruption; whoever controls her controls the Darkness. And now, three sworn enemies begin a ruthless game of politics and intrigue, magic and betrayal, and the destiny of an entire world is at stake.

I don’t read much high-fantasy. About the highest I’ve ever got with my fantasy was Melina Marchetta’s masterful ‘Lumatere Chronicles’ series, which I probably owe a great deal of thanks to for broadening my reading habits enough to give Anne Bishop’s award-winning ‘Black Jewels’ trilogy a try. Of course the other reason I wanted to read Bishop’s much-raved about first series is the fact that I’m so in love with her latest serial, ‘The Others’.

So, because I don’t read much high-fantasy (although the ‘Black Jewels’ is more dark fantasy) I want to say that I’m terrible at writing about the setting/universe in this series. I’ve tried, but I can’t quite find it in me to properly explain the mechanics, in’s and out’s – and that’s nothing against Anne Bishop as a writer – it’s just me as a reader not used to such intricate and complex world-building that’s so out of my comfort zone. So: allow me a terrible summation when I say the ‘Black Jewels’ trilogy is set in a land where Queens rule, according to the colour of their jewels (black being the most powerful). Warlord Princes freely serve these Queens, but there are some who are turned servant at the will of particularly nasty Queens – these Warlords are often given the ring of obedience, and made to submit to a Queen’s every sexual desire.

Seven hundred years ago, a Black Widow witch called Tersa saw an ancient prophecy – a Queen and Witch who will wield more power than any who have come before her.

When first book ‘Daughter of the Blood’ begins, Lucivar Yaslana (SaDiablo) is an enslaved male – a half-Eyrien being with bat-like wings, he serves at the court of evil Queen Dorothea. But one night he meets a small child – a girl – who speaks cryptically but who Lucivar is drawn to. He nicknames her Cat, and promises they will meet again, some day.

The next to meet this mysterious young girl is the High Lord of Hell himself (and Lucivar’s estranged father) Saetan. When he meets the twelve-year-old girl, he feels the power within her that marks her already as Queen and Witch – as the prophecy stated. But he also feels a pull to her, a paternal instinct and he knows she is the daughter of his heart. Her name is Jaenelle – and she will change their world.


Jaenelle plopped on air, spraddle-legged. “I know it,” she muttered, crossing her arms. “I knew it was written in male.”

Saetan vanished his glasses. “I beg your pardon?”

“It’s gibberish. Geoffrey understands it but can’t explain it so that it makes sense, and you understand it. Therefore, it’s written in male – only comprehensible to a mind attached to a cock and balls.”

The last to meet Jaenelle is Daemon Sadi (SaDiablo) – half brother to Lucivar, unknown son of Saetan and the Black Widow Tersa (who has since been lost to madness, ‘The Twisted Kingdom’, since speaking prophecy). Daemon meets Jaenelle at her country estate, where he has been banished after displeasing his Queen Dorothea with unspeakable violence. Daemon is another captive male who wears the Ring of Obedience; he is nicknamed ‘The Sadist’ for his cruel bedroom play, and because his hatred of Queens and his having to submit to them is well known. He dreams of one day finding a Queen whose bed he can share, who he truly loves and will follow anywhere.

The first two books in the ‘Black Jewels’ trilogy introduce us to this world where Queens rule and Warlords scheme. Saetan rules Hell and finds it thrown into chaos and upheaval when the daughter of his heart enters his Kingdom.

The central focus of the first book is on Jaenelle’s relationship with her adoptive father, Saetan and later her growing friendship with the much older Daemon, who has come to stay with her family and give Dorothea time to cool down. But while Saetan teaches his daughter how to harness her incredible power, Daemon starts to uncover the truth about Jaenelle’s blood family – and what they’ve done to her. Believing she has little to no power, and talks lies about meeting dragons and travelling to different realms, Jaenelle’s family have been sending her to a place called Briarwood since she was a little girl …

A lot happens in the first two books: A. LOT. We first meet Jaenelle when she’s twelve-years old, and by the end of the second book she’s 19 (I think. There’s one paragraph that explains a time-leap of two years but if you blink and miss it, you’ll be wholly confused from there on in). One really curious thing about the ‘Black Jewels’ trilogy that took me a while to adjust to is that it’s told in third person, but following certain character’s journeys … except for Jaenelle’s. She is the protagonist and pivot-point of the whole series, but we never see things from her perspective – she’s always being observed by others, and that’s how readers get to know her – once removed. This is a bit disarming, and takes some time to get used to. It does work, Bishop keeps Jaenelle as a mysterious entity successfully because we are never in her head, never seeing things through her eyes. But because the books are focused on Jaenelle’s timeline, not seeing things from her worldview means I always took some time to catch-up when she did have a leap in age.

Another reason the lack of protagonist perspective might be hard to swallow for some is in relation to the ‘romance’ – though I use this term very, very loosely when speaking of the first two books. Daemon feels he is destined to be the lover of the prophesised Queen and Witch – but he’s, understandably, shocked when he meets a twelve-year-old Jaenelle and feels she is the Queen of his destiny. Shocked, because she’s still prepubescent (around about here I had terrible flashback to Jacob and Renesmee in ‘Breaking Dawn’ – but it’s not that bad. I promise!) This is actually a real conflict for Daemon, who settles into the role as Jaenelle’s confidant and only friend while he’s staying at her estate – and I’ve got to hand it to Anne Bishop, what could have very easily become a creepy storyline (see: Stephenie Meyer) retains all its complexity, but she turns Daemon into a softer character when he decides to become young Jaenelle’s protector and companion. This is a character referred to as ‘The Sadist’ by other women in the series, so it was interesting to read how he changes for Jaenelle’s sake – part of being a Queen’s Warlord Prince is being what they need, and when he meets Jaenelle she desperately needs a friend and someone she cant trust, so that’s what Daemon becomes.

Not Lady Jaenelle Benedict. She didn’t try to be mysterious, she simply was. She walked in full sunlight shrouded in a midnight mist that swirled around her, hiding, revealing, tantalizing, frightening. Her honesty had been blunted by punishment. Perhaps that was for the best. She was good at dissembling, had some understanding about her family’s reaction if they learned some of the truths about her, and yet she couldn’t dissemble enough because she cared.

— ‘Daughter of the Blood’

But I am also hesitant to attach the word ‘romance’ to the first two books because something so awful happens to Jaenelle in book one, and it’s explored at length in book two … Bishop never forgets that her protagonist is a young girl, who has been through something so horrendous. On the one hand; Bishop writes this part of the story with stark horror, but she also deals with the ramifications with the utmost tenderness for all involved, and that’s highly-commendable.
I’m also quite surprised that while Bishop does explore this gory, awful storyline, the ‘Black Jewels’ trilogy also seems to be about gender-flipping. This is a world in which Queens rule and make erotic servants of men, and Warlord Princes want to kneel before worthy Queens.


Jaenelle opened her arms.He stepped into them and held tight. “I don’t think you’ve ever realized how strong, how necessary the bond is between Warlord Princes and Queens. We need you to stay whole. That’s why we serve. That’s why all Blood males serve.”

“But it’s always seemed so unfair that a Queen can lay claim to a man and control every aspect of his life if she chooses to without him having any say in the matter.”

Saetan laughed. “Who says a man has no choice? Haven’t you ever noticed how many men who are invited to serve in a court decline the privilege? No, perhaps you haven’t. You’ve had too many other things occupying your time, and that sort of thing is done very quietly.” He paused and shook his head, smiling. “Let me tell you an open secret, my darling little witch. You don’t choose us. We choose you.”

I really enjoyed the first book, ‘Daughter of the Blood’. And a big part of that enjoyment came from the Daemo/Jaenelle partnership. Daemon was the character that most intrigued me, so when second book ‘Heir to the Shadows’ began with him wandering the Twisted Kingdom, I was seriously disappointed. Jaenelle (now aged 14, after another aforementioned confusing time-leap) spends most of ‘Heir to the Shadows’ with no memory of her friend Daemon, and he appears only sporadically and not in his right mind. The second book was a lot more boring to me, mostly because Bishop keeps this character and relationship that she dedicated a lot of the first book to, just out-of-reach and on the periphery.

I’m about to start the third and final book (side note: although ‘Black Jewels’ is a trilogy, there are six additional ‘Black Jewels’ novels, some of which can be read as stand-alones … Oh, the serial confusion of high-fantasy!) and where ‘Heir to the Shadows’ left off, I think I’ll be a lot happier going into ‘Queen of the Darkness’ – but I shall wait and see.

I still don’t really know where I stand with high-fantasy. At times reading the first two books in the ‘Black Jewels’ trilogy was just exhausting – between the multiple character perspectives (but never the protagonists!), sudden age-leaps, the complicated jewel hierarchy system and different realms to keep track of … I think it’s a genre I need to read sparingly. But Anne Bishop made this high-fantasy very enjoyable. It’s certainly nothing like her ‘The Others’ series (stay away if you’re hoping for a same-same reading filler!) but I enjoyed her writing such a complex female protagonist who’s so strong but has been so terribly abused in her life, and how she copes with that. The beginnings of a romance are unlike anything I’ve ever read (I’m scrubbing my memory of Jacob/Renesmee, okay?) and it’s been particularly wonderful to read Daemon’s character transformation. 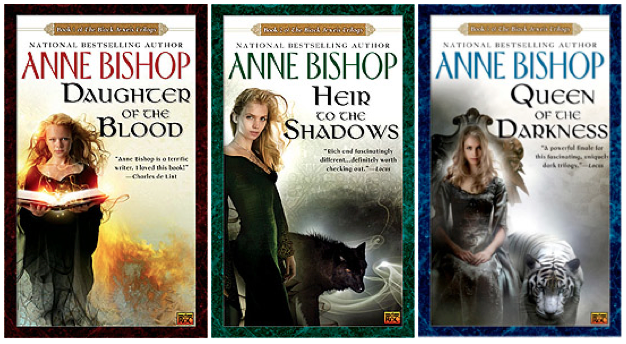