'Pack up the Moon' by Rachael Herron 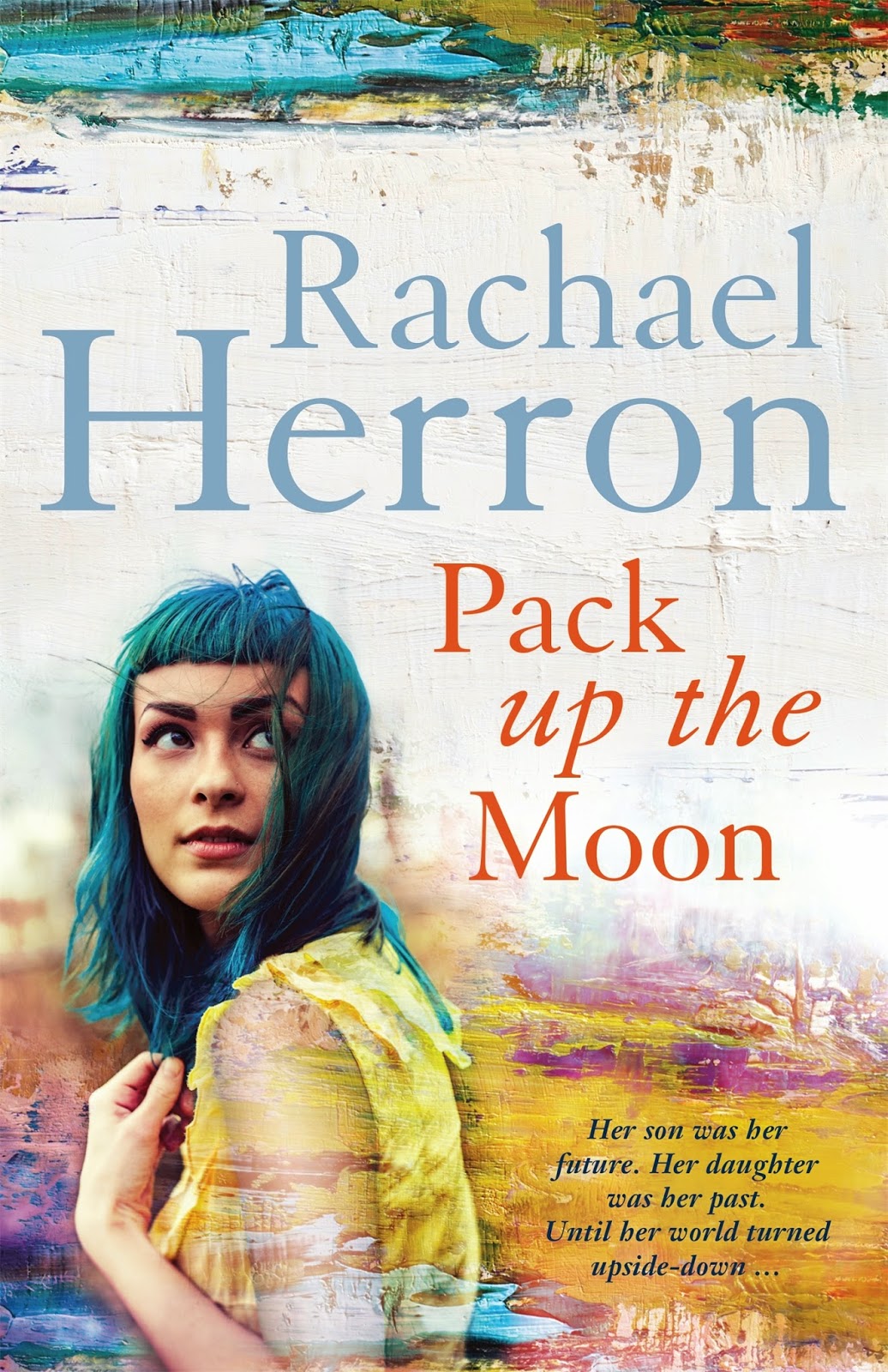 Three years after a horrible tragedy took her son and tore her family apart, artist Kate Monroe is beginning to pick up the pieces of her life. However at a gala showcasing her triumphant return to the art world, Kate's world is rocked again, when the daughter she gave up for adoption twenty-two years ago introduces herself.

Pree is the child Kate never knew and never forgot. But Pree has questions that Kate isn't sure she's ready to answer.

For one thing, Kate never told Pree's father, her high school sweetheart and ex-husband, Nolan, that they had a daughter.

For another, Kate hasn't spoken to Nolan for three years, not since the accident which took their nine-year-old son from them.

But to keep Pree from leaving forever, Kate will have to confront the secrets that have haunted her since her son died, and discover if the love of her family is strong enough to survive even the most heartbreaking of betrayals…

Pree has just found her birth mother, 22 years after she was given up for adoption.

Discovering her mother is Kate Monroe, celebrated artist and one character in a three-year-old landmark criminal case, is both a shock and no surprise at all. Pree herself is an artist, even though she doesn’t work on canvas like Kate, but prefers street tagging and her current job for a computer games company. Pree also has synaesthesia, associating people’s voices with colour – and Kate’s is all red: for passion and anger.

Kate hasn’t allowed herself to think about the baby girl she gave up for adoption when she was 16. But now, here she is. Three years after losing her baby boy, Robin, in the worst possible way, Kate’s biggest secret has just floated back into her life … and she couldn’t be more terrified, or thankful.

Nolan Monroe spent three years in jail for killing his sick son. Three years since and now he’s working on a road crew, receiving emails from parents in similar situations to what he and Kate were in with Robin. And he thinks about her, his ex-wife, all the time.

‘Pack up the Moon’ is the new stand-alone novel from American author Rachael Herron.

The title comes from the W. H. Auden poem ‘Stop all the clocks.’

The stars are not wanted now: put out every one;
Pack up the moon and dismantle the sun;
Pour away the ocean and sweep up the wood.
For nothing now can ever come to any good.

And it’s a fitting reference in this book about the aftermath of loss and tragedy, and how those two things are not always the same.

We begin the book with Pree meeting Kate for the first time. She’s 22 now, and it’s partly due to recent shocking discoveries in her own life that Pree has tried, yet again, to see if her closed adoption status had changed. It has, and that’s due to the recent tragedies in Kate’s life – the death of her sick son at the hands of his father, Kate’s childhood sweetheart, Nolan. As readers, we’re hit with a lot of emotional upheavals within the first few chapters of Herron’s book. The death of Kate’s son, Robin, Pree’s brother who she was only able to learn about because of his death… we also meet Nolan, Kate’s ex who was once a lawyer, now disbarred and working for a road crew since serving three years of a suspended sentence for killing their son. Herron has laid a tangled web indeed – but she writes these huge tragedies with such tenderness and gentle exploration that they never tumble into melodrama.

The novel begins in May 2014 with Kate and Pree meeting, which triggers Kate having to reach out to Nolan for more than just their casual email correspondence (of which, they are only allowed to share memories of Robin). But the novel also dips back to 16-year-old Kate meeting Nolan for the first time, falling deeply in love with him and being crushed by his moving away. Eventually the novel also curves back to the worst days of Robin’s illness, battling Hodgkin lymphoma and the way Kate and Nolan supported one another so much in the midst of their slowly crumbling world. Told in third person, we also following these three character’s journeys – Pree, Kate and Nolan – as they crash into one another, move each other.

But while Kate and Nolan’s journey is laid out, insofar as we can see the rocky path ahead of them in this book, Pree’s is much less clear and therefore not as compelling. By rights, Pree meeting her birth-mother and learning of the tragedy that has befallen the family that was unbeknownst to her should be interesting enough – but Herron has also heaped Pree with an unwanted pregnancy to sweet, artistic boyfriend Flynn while she’s lusting after her boss. This didn’t work for me – it was too on-the-nose as a catalyst for Pree wanting to find Kate, and I didn’t feel like she needed more than the curiosity that can nag at adopted children. Both Flynn and Pree’s boss had such fleeting appearances in the book that the stakes for her were never fleshed out enough – making her entire pregnancy/romance storyline feel half-cooked. What really worked, and all Pree needed, was the story about finding her family only to have lost half of them before she even knew it;

“I can’t help thinking that if I had a twelve-year-old brother I’d take him to the batting cage or to the arcade or something. Just to forget about it for a minute. Because I never forget about it. Not even for a minute.” She brushed an ant from the back her hand. “I wish I’d gotten to meet you, brother.” The word felt bittersweet in her mouth, round and heavy with something that could have been.


‘Pack up the Moon’ is a very different book for Rachael Herron. I’ve previously enjoyed her ‘Cypress Hollow’ romance novels, but she certainly seems well suited into this more serious story exploration. At the back of the book is a Q&A with Herron, in which she reveals part of her inspiration to write this was her job as a 911-phone operator.

The book will remind some of Jodi Picoult – for the moral conundrums at the heart of the story and this family’s life. The comparison isn’t a bad one (I’m a huge Picoult fan!) but if this had been one of her books, you can bet we’d have seen the court case unfold and subsequent media saga Kate and Nolan suffered through after Robin’s death – and there’s a part of me that wouldn’t have minded seeing that. We certainly come into this story at a seeming lull in events (though, as everyone knows, there are no dips and lulls in grief, not really). But it is interesting to read a book set in the aftermath of so much heartache, especially when Herron explores it so tenderly through these characters and their tangled lives;

“Of course not. He wasn’t perfect at all. He farted in front of my mother on purpose and he snuck lizards he caught outside and put them into the basket where I kept coffee filters just so I’d freak out. Once he told me my ass was fat in front of his first-grade teacher. And, yes, he used the word ‘ass.’ But no matter what, he was perfect.” Kate smiled. “You two have that in common.” Pree snorted, but Kate saw delight in her eyes, and something similar danced within her.


‘Pack up the Moon’ is a wonderful stand-alone novel from Rachael Herron. I hope she writes more of the like, with moral conundrums at their heart, because I think she’s an interesting voice in women’s fiction.