‘A Letter of Mary’ Mary Russell and Sherlock Holmes #3 by Laurie R. King 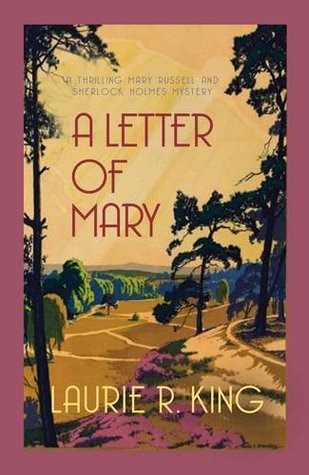 It is 1923. Mary Russell Holmes and her husband, the retired Sherlock Holmes, are enjoying the summer together on their Sussex estate when they are visited by an old friend, Miss Dorothy Ruskin, an archeologist just returned from Palestine. She leaves in their protection an ancient manuscript which seems to hint at the possibility that Mary Magdalene was an apostle - an artifact certain to stir up a storm of biblical proportions in the Christian establishment.

When Ruskin is suddenly killed in a tragic accident, Russell and Holmes find themselves on the trail of a fiendishly clever murderer. This next installment is brimming with political intrigue, theological arcana, and brilliant Holmesian deductions.

Mary Russell and her husband Sherlock Holmes are happily ensconced in their Sussex countryside home. Well, maybe ‘happily’ isn’t quite the right word. Mary has graduated from Oxford and is writing a theological book, while Holmes prowls their little house like a bad-tempered cat. Some days he inhales the London papers, others he’s a bit too calculated in his refusal to keep updated on the goings on of his old city. Mary knows he’s hungry for a new case, but she’s reluctant to admit her own itch for a bit of adventure…

Then adventure – and danger – come looking for them in the form of Dorothy Ruskin, an old friend Russell and Holmes met during a trip to Palestine. Miss Ruskin is visiting family in England, leaving behind her archeological expedition and making a detour to the Holmes residence to show Mary in particular, something that might change the face of Christianity forever.

Ruskin has a papyrus scroll that was gifted to her, and she believes it’s a letter from Mary Magdalene that suggests she was an apostle of Jesus Christ.
This is quite an explosive find – and Ruskin is keen for Mary to study the papyrus and do with it what she will. But before Mary can make any decisions, news reaches her that Miss Ruskin has been killed while in London, in a hit and run car accident.

Mary and Holmes know Ruskin’s sudden death is linked to the scroll she left in Mary’s care – which has now placed them in the firing line of whoever wants to keep Mary Magdalene’s letter a secret.

‘A Letter of Mary’ is the third book in Laurie R. King’s ‘Mary Russell and Sherlock Holmes’ mystery series.

When I began this book I expected a bit of upheaval in Russell and Holmes’s relationship. After all, when ‘A Letter of Mary’ begins, Mary Russell is twenty-three and Holmes sixty-two-years-old, and they’re recently married. I wasn’t so much surprised by their becoming husband and wife (it’s mentioned in the blurb of all the other books, and there were hints right from book one as an older Mary was narrating) but I was curious to know if there would be a new dynamic between them, now that their relationship had become an intimate one. I’m happy to report that – aside from making Mycroft occasionally blush with the knowledge of their marriage bed – not much has changed between Russell and Holmes. Since about the age of nineteen, she has been his equal and that they’re now married has just seen them become even more of a unit.

Under his guidance I harnessed my angry intelligence. I found a direction for my life, and I came to terms with my past. When I was eighteen, we worked together on a series of cases, which culminated with finding ourselves the target of one of the cleverest, most deadly criminals he had ever faced. After that case, I was an apprentice no longer – I was, at the age of nineteen, a full partner.

There are still some adjustments to married life for the both of them too, which provides a new emotional layer to the story. King is now showing us these two evolving as partners in their detective work, and as a united, married front. This also allows for some tender moments from Holmes, who’s not exactly the most easily affectionate of characters:

‘I wish I had been there. I find it difficult to work with second-hand information, even when it comes from you.’

‘So why didn’t you go?’ I said irritably.

‘I am not criticizing, Russell. There is nothing wrong with the way you gather information – far from it, in fact. It is only that I still find it difficult to accustom myself to being half of a creature with two brains and four eyes. A superior creature to a single detective, no doubt, but it takes some getting used to.’

I will say that the whodunit in this book didn’t quite fascinate me as much as those in books one and two. I should point out at this point that Laurie R. King has included theological aspects in all of the books so far – mostly pivoting around the idea of faith. This is probably because Laurie R. King herself admits a fascination with theology that she’s also given to the character of Mary who is also very proud of her Jewish background. But the discussions have never been so prominent as in ‘A Letter of Mary’, which explores shaking the very foundations of Christianity with a theological feminist investigation. Look, it’s interesting in one regard but a bit too faith-heavy for my liking.

In another way I really enjoyed this book because it majority takes place in London, with Russell doing some under-cover work and really getting stuck into the meat of the investigation and flying solo. I also really enjoyed when Mary was given a glimpse of Sherlock’s old life before retirement, and just how much of an impact he had on Scotland Yard:

‘… Some of the men laugh at him, make jokes about his pipe smoking and violin and all, but they’re laughing at all those stories Dr Watson wrote, and they don’t like to admit that their training in footprints and the laboratory’s analysis of bloodstains and tobacco ashes comes straight from the work of Sherlock Holmes. Even fingerprints – he was the first in the country to use them in a case. Miss Russell, when he says there was murder and a burglary was connected with it, then I for one believe him.’

Speaking of Laurie R. King looking at the impact of Conan Doyle’s Sherlock on her new Sherlock, I read this book at the same time that a huge decision was being made around the copyright of Sherlock Holmes, the character. From the Guardian: “A US court has ruled that Sherlock Holmes – along with 46 stories and four novels he’s appeared in – is in the public domain, reaffirming the expiration of the copyright once owned by the estate of Scottish writer Arthur Conan Doyle.” The federal suit was brought in early 2013 by author and scholar Leslie Klinger. The suit became necessary after the Doyle estate attempted to extract a license fee for a new book he was co-editing with Laurie R. King. That was really interesting to have in the back of my mind, because I just kept thinking how respectful King is of Conan Doyle’s creation, often paying tribute to his past stories and old cases and ensuring that any Sherlock Holmes fan would find a lot to love in her spin-off series with Mary Russell. 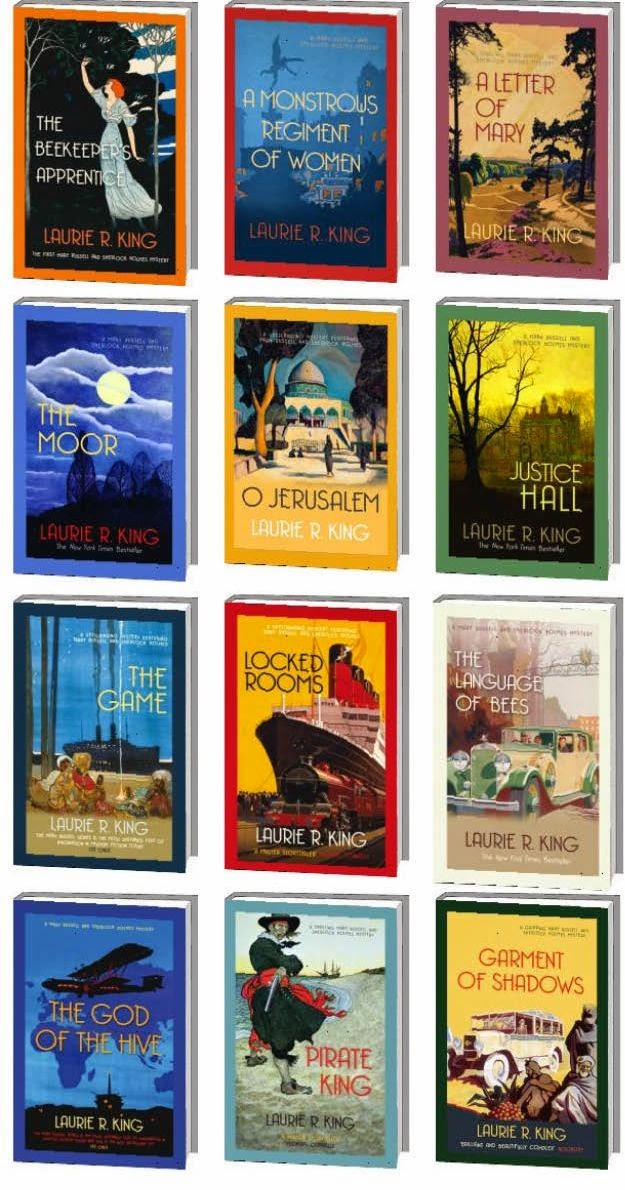