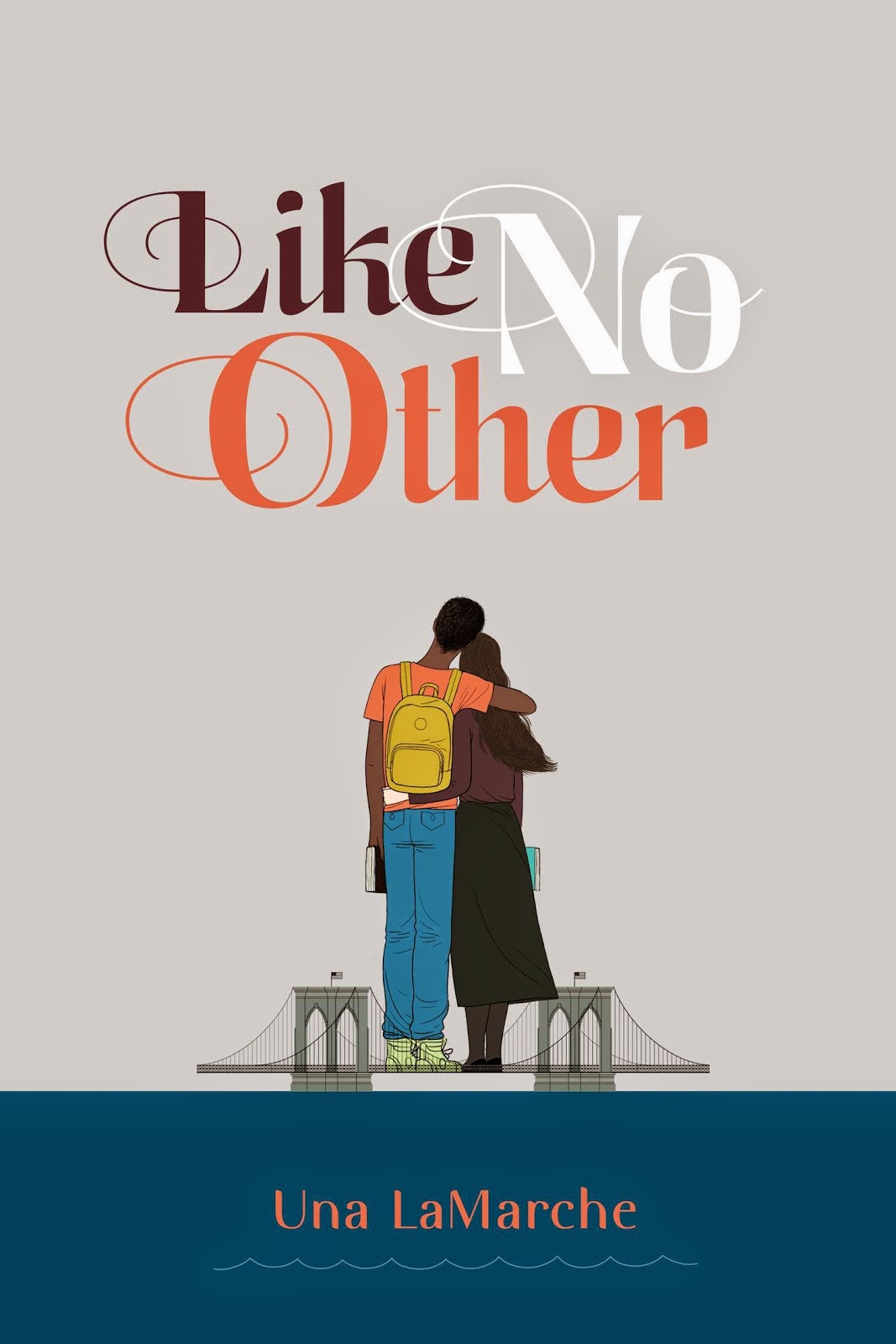 Fate brought them together. Will life tear them apart?
Devorah is a consummate good girl who has never challenged the ways of her strict Hasidic upbringing. Jaxon is a fun-loving, book-smart nerd who has never been comfortable around girls (unless you count his four younger sisters). They've spent their entire lives in Brooklyn, on opposite sides of the same street. Their paths never crossed . . . until one day, they did. When a hurricane strikes the Northeast, the pair becomes stranded in an elevator together, where fate leaves them no choice but to make an otherwise risky connection. Though their relation is strictly forbidden, Devorah and Jax arrange secret meetings and risk everything to be together. But how far can they go? Just how much are they willing to give up? In the timeless tradition of West Side Story and Crossing Delancey, this thoroughly modern take on romance will inspire laughter, tears, and the belief that love can happen when and where you least expect it.

There’s a storm raging across New York, and at a Brooklyn hospital two teenagers from vastly different worlds are about to collide.Jaxon is sixteen-years-old and currently sitting by his best friend’s bedside, after Ryan attempted to jump a fallen tree branch with his skateboard and got a broken arm in the process. Devorah is also sixteen, sitting in a waiting room with her pious brother-in-law, Jacob, awaiting the premature birth of her first niece. As the generators power on, Devorah becomes increasingly worried for her eighteen-year-old sister Rose as she goes into labour; their parents are out of town visiting a sick aunt, and it’s down to Devorah to be her sister’s strength. But when Jaxon and Devorah – two perfect strangers who couldn’t be more opposite – get into the hospital elevator, they have no idea what fate has in store for them. The elevator stops and throws them into darkness – stuck, as the storm outside cuts power to the hospital. Forced to keep one another company, Devorah only remembers that the boy in the elevator is very tall, and black and she’s breaking ‘yichud’ by even just telling him her name – because her Jewish religious law says she cannot speak to men outside her family and unchaperoned … never mind that her family really wouldn’t want her talking to someone who is so very secular.Devorah, Jaxon learns, is a Hasidic Jewish girl who lives practically next-door to him in Brooklyn … except she’s from the Hasidic community of Crown Heights. When he can’t contain his shock at this revelation, and Devorah replies with a snappy; “What? We all look the same to you?” he feels himself falling harder and faster for this girl than he ever has in his not-so-illustrious romantic history. And even though the two of them part ways after an elevator rescue – they both conspire to meet again, each intrigued by the other and consumed by the need to see where their attraction may lead … ‘Like No Other’ is the new contemporary young adult novel from American author Una LaMarche. This book has been on my radar for a while now – after that gorgeous cover came out (illustration by Michael Kirkham) and the story promised some much-needed diversity in YA. I went into this book with extremely high-hopes … and by about 10 pages, I was relieved to discover that each and every one would be met. Because I knew after those 10 pages, that ‘Like No Other’ was going to be a deserving hit. The story begins on August 28 and ends on September 22 – and in that timespan we get alternate chapters told from both Jaxon and Devorah’s point of view. And even though it’s a relatively small slab of time for these characters, I was surprised that the whirlwind romance they enter into feels no less raw and vivid for being so condensed. Indeed, the page starts igniting with sparks from the moment of Devorah and Jaxon’s fateful meeting;

She stands up and takes a step toward me, and as the light filters down through the hole above us, like artificial moonlight on a movie set, I can really see her eyes for the first time, big and gray flecked with shimmering hints of sky blue, like someone bottled that moment when Dorothy steps out of her black-and-white farmhouse and into Oz.

That’s the moment I know I’m in trouble.

But even though Jaxon and Devorah both tell their sides of the story, make no mistake that the real protagonist of ‘Like No Other’ is Devorah. She’s the one who goes on the bigger hero’s journey, and of the two of them she’s the one who most needs her world shook up, and her foundations rocked by Jaxon.From our first meeting Devorah, readers will suspect that this is a girl who will not be tamed. Indeed, while reading this book I had many goosebump moments from LaMarche’s words, never more than when Devorah is witnessing the birth of her niece;


I want to stand up and burst into applause – people do it for all kinds of lesser miracles: when a pilot lands a plane, when a pre-schooler bangs tunelessly on a piano; when sweaty men manage to throw a ball into a metal hoop, so why not now? Why not for this miracle? There is life in this room. A new life. And I saw it happen.

Readers will then be surprised to discover that Devorah is considered to be the very definition of ‘frum’ (very pious) by her family and friends; she’s top of her class, respectful, modest and shuns technology and the secular world in a way that even her peers consider extreme (indeed, Devorah’s young brothers hide iPods and magazines). But, after her sister’s marriage and now her pregnancy (and only at the age of 18!) Devorah has to acknowledge that she’s scared of what the next two years will bring – when she’ll have to leave her education behind and her parents will go to the matchmaker to find her a husband. Devorah can quietly admit to herself that she’s not ready for that life, but it’s meeting Jaxon that causes her to start questioning the reasons why… Back in July I read 'Invisible City' by Julia Dahl, a murder-mystery set inside a Hasidic Jewish community of Brooklyn. From reading that book I was already familiar with a few traditions, and in particular the patriarchal system. Una LaMarche really must be commended for how tenderly she portrays this community and questions it – yes, through the character of Devorah she is critical of many aspects of how this community operates, but she never does so in a disrespectful way. In the acknowledgments LaMarche thanked a group of women – “I dove into ‘Like No Other’ knowing that the book would be doomed if I didn’t give Devorah a real, vibrant inner voice, family life and community, and I am forever indebted to the women who told me their stories so that I could tell hers.” That respect and attention to detail shines in the text, and young readers will be both captivated and forced to question the foundations of the community while still acknowledging Devorah’s deep love and respect for it. A hard balancing-act, but LaMarche does it.Though Devorah’s is very much the larger character arc (purely for needing the most change in her life) Jaxon is a no less wonderful protagonist. Particularly because LaMarche touches on so many relevant racial tensions in this book; indeed, the horrible events surrounding Michael Brown’s death in Ferguson, Missouri were playing out while I read the book, and highlighted the importance of continuing to campaign for diverse voices in YA such as LaMarche’s Jaxon:


It’s funny; I forget sometimes how I might look to other people. I could be reading ‘The Great Gatsby’ on the 3 train, or walking down the street listening to a podcast on my phone, or coming out of my orthodontist’s office with Invisalign braces feeling like the biggest nerd on the planet, but some people don’t notice anything but an almost-six-foot-tall black man. After Trayvon Martin got shot in Florida, Mom wouldn’t let me wear a hoodie for six months.

‘Like No Other’ was also a great book for teaching me so much. About the Hasidic Jewish community, of course, but LaMarche also highlights some pertinent historical markers that I never knew about – like the Crown Heights riot of 1991, when tensions between Hasidic Jews and the Crown Heights black community boiled over. This book has been praised for its diversity, and I do think it’s entirely deserving:


“How does it feel to be a minority?” I ask him as we pass a big store called Judaica World.

“Fine,” he says – the only answer that a privileged white kid can give to that question without getting a beat-down.

I loved this book, and it’s going down as one of my favourites of 2014. It’s a tough book, even while cloaked in the very romantic story of Devorah and Jaxon. LaMarche is writing a deeper tale of star-crossed lovers, one that discusses racial and religious tensions, feminism and independence – an absolute triumph for Una LaMarche.

Like No Other is being released in Australia by Penguin Books Australia. Available from September 24.
Posted by Danielle at 6:00 AM

Email ThisBlogThis!Share to TwitterShare to FacebookShare to Pinterest
Labels: Una LaMarche, YA