'As Stars Fall' by Christie Nieman 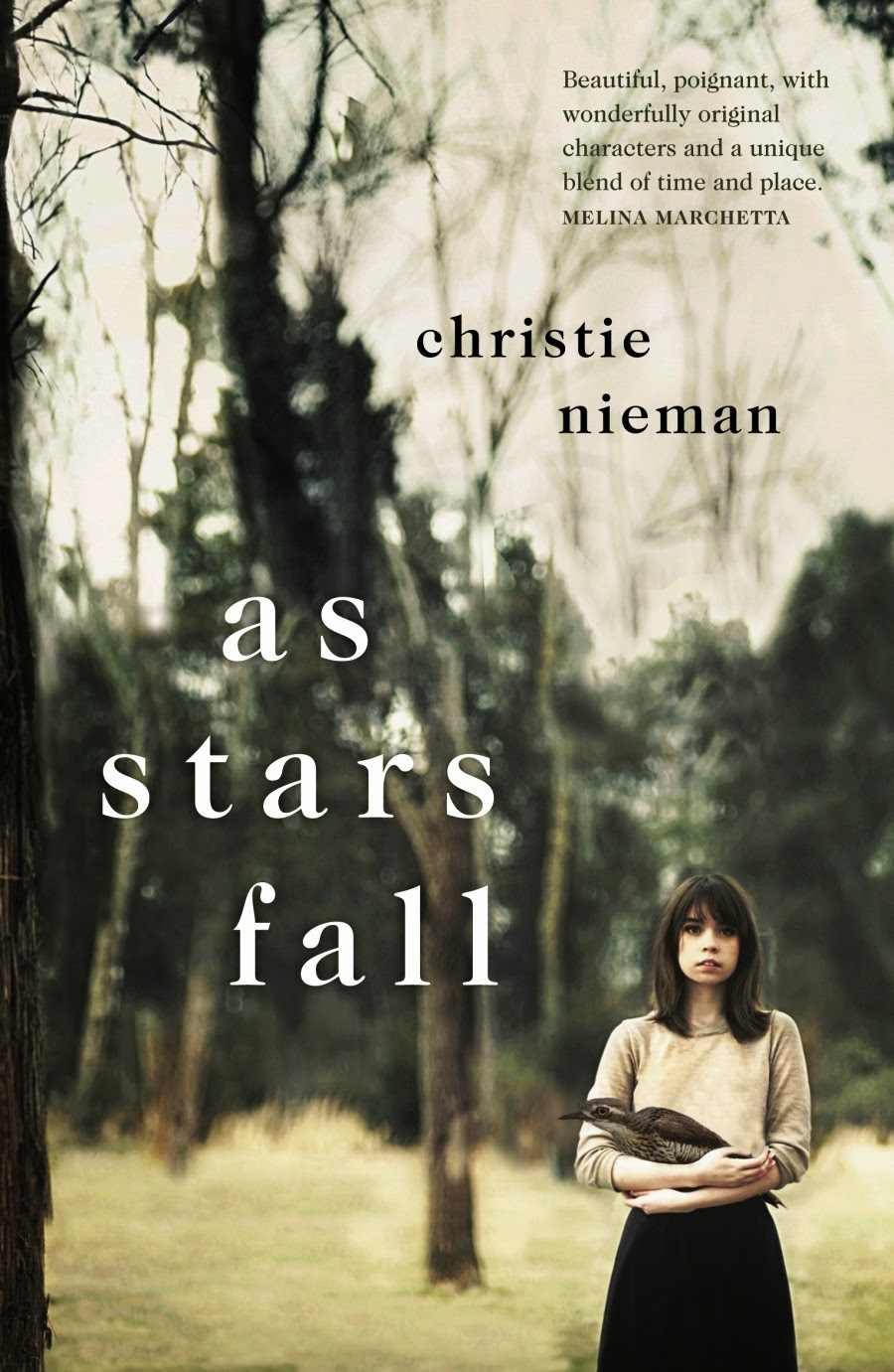 In north-eastern Victoria, bush-covered hills erupt into flames. A Bush Stone-curlew escapes the fire but a woman studying the endangered bird does not.

When Robin's parents split up after the fire, her mother drags her from the country to a new life in the ugly city. Robin misses her dog, her best-friend, the cows, trees, creek, bushland and, especially, the birds. Robin is a self-confessed, signed-up, card-carrying bird-nerd. Just like her dad.

On the first day at her new school, Robin meets Delia. She's freaky, a bit of a workaholic, and definitely not good for Robin's image.

Delia's older brother Seth has given up school to prowl the city streets. He is angry at everything, but mostly at the fire that killed his mother.

When the Bush Stone-curlew turns up in the city parklands next to Seth and Delia's house the three teenagers become inextricably linked. Soon their lives are circling tighter and tighter around each other, and the curlew.

The book begins with a curlew watching a bushfire rage:

The light was strange. The darkness was a deep red, and there was a thickness between the stars.


There is a human caught in the “stinging air”, and the curlew watches on as the human is, “Taken away. Bought forever to the stars.”

From the beginning alone, readers will know that they are about to go on a somewhat harrowing journey made no less painful for the poignancy of Nieman’s masterful words. I was not surprised to discover that Christie Nieman is in fact a playwright, even being nominated for a Green Room Award for her play ‘Call me Komachi’. She sets the stage for this novel so beautifully – beginning with a scene many Australians will be familiar with. Even if you’re not someone who has found themselves and their town ravaged or threatened by bushfire, the summer seasons in Australia are often marked by a tragedy we are all too familiar with. Watching the 2009 Black Saturday bushfires on the TV, visiting the eerie memorial to the 2003 Canberra bushfires, I’ve even heard first-hand accounts of the 1983 Ash Wednesday fires from my dad, who was a police officer at the time and sent to direct fleeing traffic. Nieman’s book begins from the point of view of a curlew bird watching the flames come, and then alternates to the perspective of a human woman about to be swallowed up by the fiery monster – it’s a viscerally frightening scene made even more so for the calm beauty of Nieman’s words, describing something so sinister and mindless.

From there, we are introduced to three main players. There’s first-person narration from Robin Roberts (cruel parents), a country girl who has moved to the city with her mum – leaving behind her beloved Murramunda after fires ravaged the land.

Robin meets and reluctantly befriends a strange girl at her school called Delia … whose mother was the human that the curlew bird was watching in the beginning, being consumed by a firewall.

Delia and her brother Seth’s chapters are in third person, perhaps a reflection of the disconnection they feel, living in the fallout of their mother’s tragic death. A lecturer, their mum was in the bush doing research on the bush stone-curlew – the very same bird that Delia notices Robin idly sketching during detention one day.

Robin is, in fact, a “bird nerd” feeling unsettled in the concrete city jungle, partly because she misses the variety of birds. When Robin, Seth and Delia discover a bush stone-curlew in nearby parklands, the discovery binds them together ever tighter.

Christie Nieman really needs to be commended – she’s clearly done a lot of research into the psychological impacts of bushfires, particularly on teenagers. Delia and Seth are coping in their own, very different ways. For Delia, it’s throwing herself into her mother’s research on the curlew and looking for connections and glimpses of fate in the wake of her loss. For Seth, it’s choosing oblivion with the drug ‘angel dust’, and many of his chapters read like wading through the smoky haze of his subconscious and self-hatred.

Robin is also feeling the impact of the bushfires, but mainly in the displacement of home and the fractures she’s felt in her family;


But two months ago, when the fire came through, all the birds disappeared. Dad said it was worse than any fire anyone had seen in decades. He said we were lucky that we’d had all our sheep up in the top paddock: we hadn’t lost any, not like some of our neighbours. The fire was fast and hot, which is bad. It killed someone, some woman up in the hills, not a local, right on the fire track where Dad and I used to go to collect wood. It was in all the papers. And the fire stripped so much of the landscape that only days after it went through, there were absolutely no birds left.

I should have seen it as an omen, the birds all leaving like that. They left first, and then Mum and I left for the city a few weeks later. And I haven’t been back since. I don’t even know if any of them have returned.


I really loved that Nieman went into the range of loss for these characters – particularly because their pain is so viscerally connected to nature. This is really a recurring theme in the novel, as Nieman explores the side-by-side affects of disaster on both humans, nature and wildlife;


And that’s the complicated thing about disturbance. It’s a natural part of an ecosystem. It compels life, it changes life, it makes like dynamic. It makes an ecosystem what it is, and it makes us who we are too. But it can be dangerous: give an ecosystem, or a person, too much disturbance, and it can drive them past their point of no return.


I did occasionally feel quite cold towards Seth and Delia, but only because they felt deliberately distanced from readers with their third-person narration. Compared to Robin’s voice – vibrant, sometimes combative, a little bit cheeky – Delia and particularly Seth’s chapters were harder to get through. I appreciate that this was deliberate, and a way for Nieman to communicate just how disconnected the siblings are after the loss of their mother, but it was my response to their chapters nonetheless.

‘As Stars Fall’ is a tender morsel of a novel, a ‘Silent Spring’ for young adults that also explores dramas of the heart in the wake of nature’s tragedy. Christie Nieman is bringing something very different to contemporary YA, and I can’t wait to see what she writes next.

Email ThisBlogThis!Share to TwitterShare to FacebookShare to Pinterest
Labels: Aussie YA, Australian Women Writers, Australian YA, Christie Nieman, YA