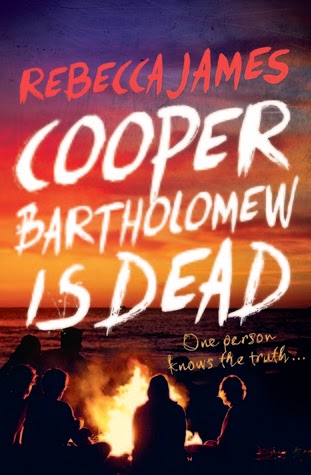 Cooper Bartholomew's body is found at the foot of a cliff.

That's the official finding, that's what everyone believes. Cooper's girlfriend, Libby, has her doubts. They'd been happy, in love. Why would he take his own life?

As Libby searches for answers, and probes more deeply into what really happened the day Cooper died, she and her friends unravel a web of deception and betrayal. Are those friends - and enemies - what they seem? Who is hiding a dangerous secret? And will the truth set them all free?

‘Cooper Bartholomew is Dead’ is the new YA novel from Australian author Rebecca James.

I’ve been excited for this novel since 2010. That’s when I read James’s debut ‘Beautiful Malice’ and first saw the title of her work-in-progress, ‘Cooper Bartholomew is Dead’. No synopsis or release date, let alone information on if the book had even been sold to a publisher … just that title, and I was hooked. Four years later and ‘Cooper Bartholomew is Dead’ is Rebecca James’s third book – after loving ‘Beautiful Malice’ and making herself an automatic-buy author with ‘Sweet Damage’, her third book lives up to that initial intrigue and is going down as a 2014 favourite.

‘Cooper Bartholomew is Dead’ is split between THEN and NOW. In the now, Cooper Bartholomew is indeed dead (sorry, the spoiler in the title is true) having committed suicide – his friends Sebastian and Claire are reeling, and his girlfriend Libby is numb. In THEN, we read how Libby and Cooper bumped into one another at a bottle shop – they were part of the same graduating high school class, and even worked on an assignment together once, but Cooper’s ex-girlfriend Claire warned him off striking up a friendship with ‘the backstabber’ Libby. When they meet again there’s tension and hesitation, but an unmistakable ‘something’ has both of them wanting to reconnect …

In the NOW, Libby is becoming less and less convinced of Cooper’s committing suicide. Something is not adding up: they’d made plans to move to Sydney together, and Cooper loved her – they had a future together.

The novel’s timeline flips, as does narrative POV, and we hear from Libby, Cooper, Seb and Claire – we wade through their memories of Cooper and hidden agendas since his passing as well as Cooper’s own accounts leading up to his death and pivotal relationship with Libby. Rebecca James really needs to be commended for the pacing of this plot – especially since there’s a give-away in the title that could have hindered the suspense. It’s teased out beautifully to feel like YA-noir and the short, sharp chapters leading to the denouement are wonderful.

But the real strength of this book lies in the central character of Cooper himself. Maybe it’s because I started reading this when the whole ‘Twin Peaks’ second season talk started, but I couldn’t help but think of Cooper Bartholomew having hints of Laura Palmer to him, and Rebecca James’s latest novel as a head-nod to David Lynch in exposing the seedy underbelly of a perfect life. It takes a special character to be dearly departed for a good portion of a book, and still come across so charismatic and downright loveable, that readers mourn his loss along with the characters:

I dream of Cooper. I dream that he climbs through my window while I’m sleeping and slips into my bed. I wake up and find him next to me – warm and very much alive – and cry with joy. He laughs and tells me that his death was all a stupid joke. I hug him tight and am so overjoyed, so glad to see him, I don’t even care that he played such a cruel trick.

But a police siren screeches through my open window and I’m pulled from my dream with a vicious jolt. I’m awake, alone in my bed, feeling as though Cooper has been ripped away from me. And the shock of this reality – Cooper is dead and gone and I will never see or speak to or touch him again – is like a kick to the stomach. The pain takes my breath away.

Libby and Cooper’s romance is teased out in parallel to Libby’s investigation into Cooper’s death – almost making the romance as much of a mystery as the mystery itself. And that romance is so gorgeously realised that when the inevitable happens, it does hurt.

‘Cooper Bartholomew is Dead’ is another fabulous novel from one of Australia’s favourite YA authors. It’s a slice of ‘Twin Peaks’ noir for young readers to get wrapped up in – and that it hurts so much is part of the novel’s charm and Rebecca James’s talent.