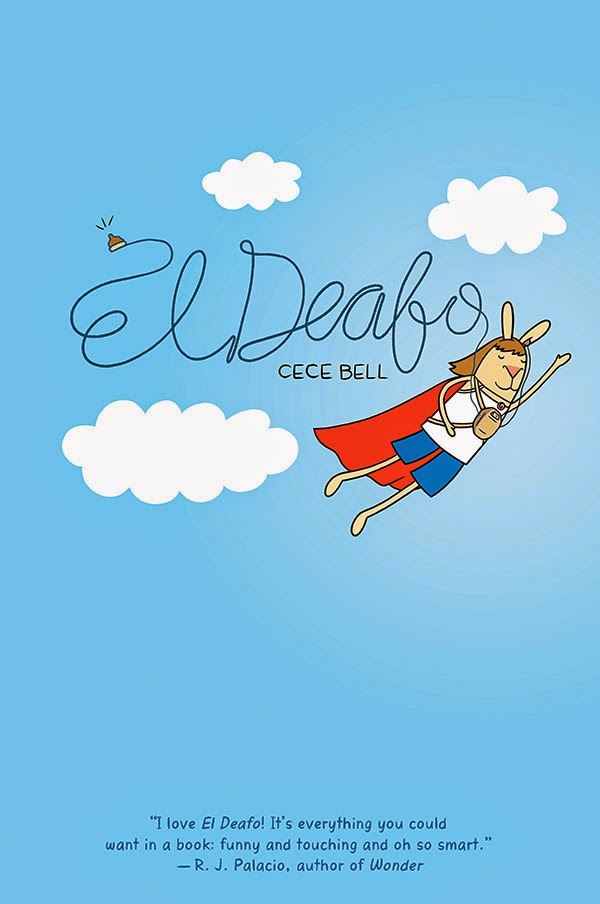 The Phonic Ear gives Cece the ability to hear—sometimes things she shouldn’t—but also isolates her from her classmates. She really just wants to fit in and find a true friend, someone who appreciates her as she is. After some trouble, she is finally able to harness the power of the Phonic Ear and become “El Deafo, Listener for All.” And more importantly, declare a place for herself in the world and find the friend she’s longed for.

I have been excited for this middle-grade graphic semi-autobiographical novel for the longest time! I remember when BEA was on earlier this year, lots of publishing articles were writing about how autobiographies and memoirs were a predicted trend coming to youth literature – a few titles that intrigued me were Beyond Magenta: Transgender Teens Speak Out by Susan Kuklin, We Should Hang Out Sometime: Embarrassingly, a true story by Josh Sundquist, not to mention David Burton’s How to Be Happy which won the Text Prize for Young Adult and Children's Writing this year … and El Deafo by Cece Bell.

EL Deafo is Cece Bell’s semi-autobiographic graphic novel that begins when Bell is four and a half years old and contracts meningitis. During her recovery it’s discovered that she has become severely to profoundly deaf, and so begins her new life as the only deaf member of her hearing family, and the beginning of her relationship with The Phonic Ear – a hearing aid pack that she wears like a backpack and connects to her ears via cords. 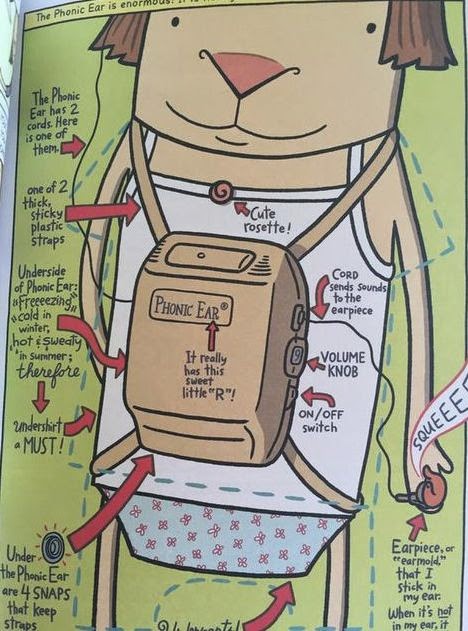 I particularly loved the way that Bell portrays her gradual hearing loss – while recovering in hospital odd things start happening (like the nurses giving all the kids ice-cream, except her). The strangeness continues at home, where Bell becomes anxious when she can’t find her mother in the house. The gradual silence is expressed through speech-bubbles with fading text … and during these chapters Bell is speaking from her four-year-old perspective, unable to pinpoint exactly what’s changed in her world, but with a deep sense that something is missing. 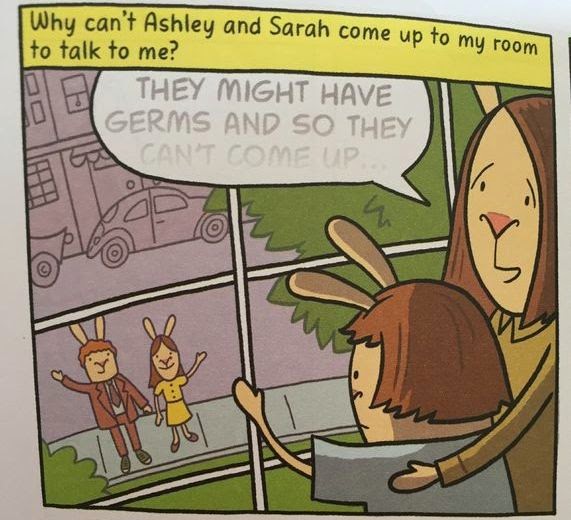 Bell’s childhood plays out during the 1970s, so at her specialist kindergarten she – along with her fellow deaf and hard of hearing classmates – are taught how to lip-read. 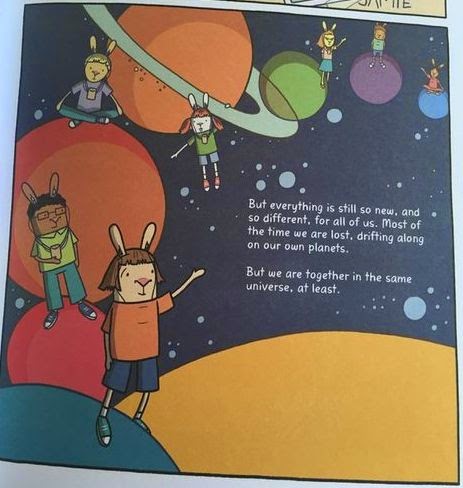 This proves a complicated lesson for Bell, who details the myriad of ways that lip-reading is about a lot more than just looking at people’s lips – you have to look out for visual, context and gestural clues for one thing. And if a person is talking to you at night, with a moustache/beard, with their head turned or amongst a big group of people – all those clues are of little help. 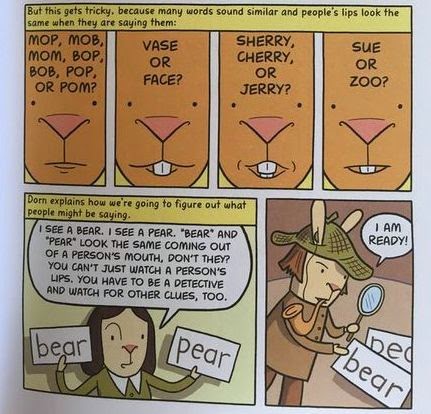 By the time Bell’s family moved to a different town, she had done so well at kindergarten that when she started first grade, she went to a hearing school and was the only student there who had hearing loss. Outfitted with The Phonic Ear and a microphone for her teacher to wear (that transmitted to Bell’s hearing aid) it was during this time that Bell came to think of herself as El Deafo – a superhero with super hearing! 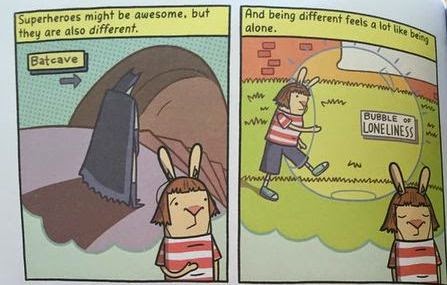 Bell explores so many facets of her childhood, and all of it is entirely relatable. From trying to extricate herself from a bossy friend, to experiencing her first crush – so much of El Deafo is universal. And then there are the ways that Bell explores how her childhood was ever so slightly different and sometimes more complicated – the friend who insisted on introducing Cece as her “deaf friend” for instance, her initial embarrassments with sign-language. 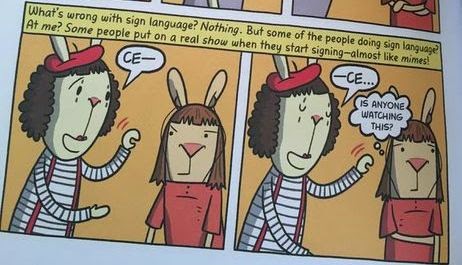 El Deafo is also laugh-out-loud funny. Bell has hijinks with her Phonic Ear and microphone, which turns her into a fly-on-the-wall in the teacher's lounge ... and during her teacher's toilet breaks. It's great to watch Bell transform into a self-confident superhero on the page, but only when she starts being a little more honest and lets her classmates into her unique world.

I really loved El Deafo. I interviewed Kayla Whaley recently, a moderator over at the wonderful Disability in KidLit blog and someone you should definitely follow on Twitter. In my Kill Your Darlings interview, Whaley spoke about how important it is to show varied and positive forms of disability in youth literature – “I think that’s a point that doesn’t get made often. There are innumerable disabled experiences, not one single authoritative experience. It’s critical that we have varied portrayals, that we show young readers that their experience of disability is valid, no matter what that experience looks like.”

What’s really great about Cece Bell is that she acknowledges El Deafo is very much based on her unique childhood experiences; “It is in no way a representation of what all deaf people might experience,” she says in a note from the author. She also acknowledges that many in the Deaf community do not want to “fix” themselves, or see being deaf as a disability. But she’s very honest in this book, and explores the many ways that she struggled and railed against her hearing loss – “I was a deaf kid surrounded by kids who could hear. I felt different, and in my mind, being different was not a good thing. I secretly, and openly, believed that my deafness, in making me so different, was a disability. And I was ashamed.” 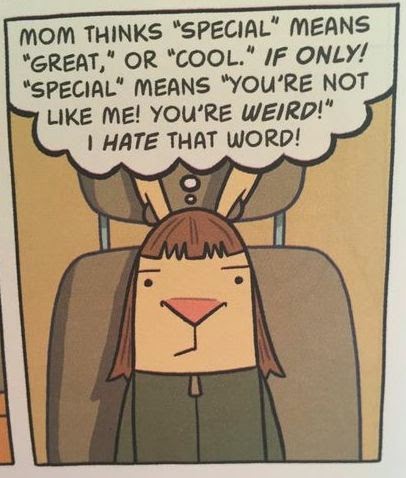 These are the positive and varied portrayals that Kayla was talking about – and El Deafo is such a wonderful example of how powerful such stories can be. At the end of her author’s note, Bell summarises what it took so long for her younger-self to learn: “Our differences are our superpowers!”

This is a favourite book of 2014 for me – an absolutely stunning semi-autobiographic graphic novel that middle-grade readers will love, but everyone should read!