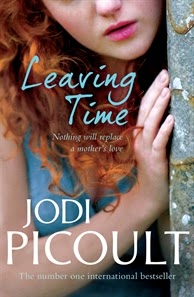 Alice Metcalf was a devoted mother, loving wife and accomplished scientist who studied grief among elephants. Yet it's been a decade since she disappeared under mysterious circumstances, leaving behind her small daughter, husband, and the animals to which she devoted her life. All signs point to abandonment - or worse.

Still Jenna - now thirteen years old and truly orphaned by a father maddened by grief - steadfastly refuses to believe in her mother's desertion. So she decides to approach the two people who might still be able to help her find Alice: a disgraced psychic named Serenity Jones, and Virgil Stanhope, the cynical detective who first investigated her mother's disappearance and the strange, possibly linked death of one of her mother's coworkers.

Together these three lonely souls will discover truths destined to forever change their lives. Deeply moving and suspenseful, Jodi Picoult's 21st novel is a radiant exploration of the enduring love between mothers and daughters.

Jenna Metcalf’s life should have been very different. She should have been raised at the Elephant Sanctuary that her father, Thomas, started and ran alongside her mother, Alice Metcalf; a brilliant scientist whose seminal work was on grief among elephants. Jenna should have been raised by the village behind the sanctuary, fellow keepers Nevvie, Grace and Gideon. Jenna should have been raised to be her mother’s shadow, the little miniature of her with pink Converse shoes and a bright mane of red hair.Instead Jenna’s childhood was railroaded when she was just a baby, and never got back on course. At thirteen she now lives with her guardian grandmother because her father is institutionalised and her mother disappeared a decade ago after the trampling death of a fellow keeper at her parent’s sanctuary. But Jenna has never stopped hoping that her mother is alive, and that her cold case will lead to a missing person who has either forgotten about her past life or has been searching as desperately for Jenna as she has for her mother. So Jenna is employing the help of two unlikely people – once internationally renowned television psychic (with a high success rate) Serenity Jones has been out of the public eye for a number of years, ever since her psychic abilities dried up after a disastrous child abduction case. Then there’s Virgil Stanhope, the detective who worked the elephant sanctuary death case and still feels partly responsible for Alice Metcalf’s disappearance. This unlikely trio will set out to answer Jenna’s most burning question once and for all – what happened to her mother?‘Leaving Time’ is the new novel from Jodi Picoult.I had so been looking forward to this novel – I am a huge Jodi Picoult fan, and proudly display her backlist on my bookshelf. I’d count ‘My Sister’s Keeper’ and ‘The Pact’ among my most enjoyable reads of the last decade, and last year I thoroughly enjoyed her novel ‘The Storyteller’. I classify Jodi Picoult as one of my ‘tried and true’ authors – I know I’m going to get suckered into her novels, and I rarely care how outlandish the storylines are because I enjoy the journey so very much. So I’m a little bit heavy-hearted to report that ‘Leaving Time’ wasn’t the steadfast read I’d been hoping for …The story is told from four perspectives. Jenna Metcalf is the precocious thirteen-year-old narrator, admittedly too smart for her own good and so unlike the other kids in her class that she’s often labelled a freak. Jenna’s voice does feel out of touch with her age, but we can assume that the traumatic history around losing her mother (and, in many ways, her father) has left her a wise and scarred old soul in the body of this adolescent;

I know that I used to be a girl whose hair was strawberry blond, who ran around like a wild thing while my mother took endless notes about the elephants. Now I’m a kid who is too serious for her age and too smart for her own good. And yet as impressive as I am with scientific statistics, I fail miserably when it comes to real-life facts, like knowing that Wanelo is a website and now a hot new band. It eighth grade is a microcosm of the social hierarchy of the human adolescent (and to my mother, it certainly would have been), then reciting fifty named elephant herds in the Tuli Block of Botswana cannot compete with identifying all the members of One Direction.

Jenna pours over her mother’s old scientific research on elephants, and it’s in these segues that we also get first-person narration from Alice Metcalf explaining her life’s work – studying grief among elephants, how she came to this thesis working in Botswana where she met Thomas Metcalf and made the journey with him back to America to work at his sanctuary and marry him, after discovering she was pregnant after a one-night stand in Africa. Alice is narrating the events and circumstances leading up to her disappearance, all of her chapters are set in the past and hurtling towards a terrible night that Jenna is still reeling from the repercussions of.


“Ten years isn’t a cold case, it’s an ice trail. There’s nothing still here now that existed back when your mother disappeared.”

Then we have Virgil and Serenity – each carrying their own demons and personal reasons for helping young Jenna sift through the sands of the past to get to the truth.


“I used to think I saw my mom all the time,” I say softly. “I’d be in a crowded place and I’d let go of my grandma’s hand and start running toward her, but I was never able to catch up.”

Serenity is staring at me with a strange look on her face. “Maybe you are psychic.”

“Or maybe missing someone and finding someone have the same symptoms,” I say.

There’s a lot going on in ‘Leaving Time’, but that’s not unusual for Picoult who prefers multiple narrators and stringing loose threads together to make an intricate pattern. The pattern of ‘Leaving Time’ is not hard to discern either; elephants, memory and grieving, with heady doses of the matriarchy/ allmothering aspects of elephant life – the mother/child connection. And that’s what worked the most for me – the research into elephant memory, particularly relating to traumatic events.Picoult, through Alice, does write beautifully and tenderly about elephants – from their grieving process to a mother’s patience for her calf and the way a herd plays together. These descriptions are gorgeous, and even without reading Picoult’s acknowledgements at the back of the book (where she cites the work of people like ‘Elephant Whisperer’ Lawrence Anthony) and speaks about ivory trade, I’d know how deeply moved she was in the process of researching these animals for this book. It was the human connections that were harder for me to enjoy. Indeed, it wasn’t until halfway through this book that I even felt I was semi-hooked, interested in Jenna’s story and how it would all end. Where Picoult in the past has drawn readers in with moralistic “what would you do?” premises, ‘Leaving Time’ felt murkier for leaving readers out of such conundrums – we’re very much along for the Alice/Jenna ride, and little is asked of what we’d do in their shoes – which is so often how Picoult’s books work.**MAJOR SPOILER – do not read until you’ve finished the book – but I can’t write a review without saying it** highlight to read

[I guessed the ‘twist’ about 100 pages out from the end. And I was guessing in a “oh, I hope that isn’t what she’s been doing here…” kind of way. Because, let’s be honest, M. Night Shyamalan and ‘The Sixth Sense’ have spoiled that twist for everyone – I think it will cross a lot of people’s minds because by now it’s not really a twist at all. It’s been played, and it felt that way in ‘Leaving Time’ I’m sorry to say.]I felt a disconnection in this book, and maybe that’s me missing some of my favourite Picoult staples: heart-warming (though complicated) romance, courtroom drama and moral grey-area. ‘Leaving Time’ was okay, but I’m used to being consumed by a Jodi Picoult book instead of the limp-along way I read her latest.