'A Bollywood Affair' by Sonali Dev 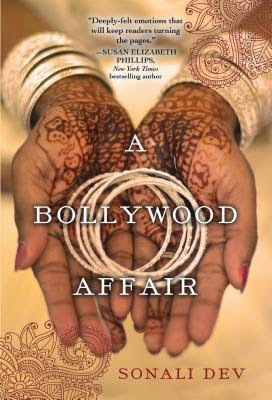 Mili Rathod hasn’t seen her husband in twenty years—not since she was promised to him at the age of four. Yet marriage has allowed Mili a freedom rarely given to girls in her village. Her grandmother has even allowed her to leave India and study in America for eight months, all to make her the perfect modern wife. Which is exactly what Mili longs to be—if her husband would just come and claim her.
Bollywood’s favorite director, Samir Rathod, has come to Michigan to secure a divorce for his older brother. Persuading a naïve village girl to sign the papers should be easy for someone with Samir’s tabloid-famous charm. But Mili is neither a fool nor a gold-digger.

Open-hearted yet complex, she’s trying to reconcile her independence with cherished traditions. And before he can stop himself, Samir is immersed in Mili’s life—cooking her dal and rotis, escorting her to her roommate’s elaborate Indian wedding, and wondering where his loyalties and happiness lie.
Heartfelt, witty, and thoroughly engaging, Sonali Dev’s debut is both a vivid exploration of modern India and a deeply honest story of love, in all its diversity.

‘A Bollywood Affair’ is the 2014 debut contemporary romance novel by Sonali Dev.This novel feels like the romance genre’s break-out hit of 2014. I received the book via NetGalley but didn’t think much of it to bump up on my TBR pile … until I started hearing about it EVERYWHERE. Book bloggers, Goodreads and Twitter were talking about ‘A Bollywood Affair’ to such a point that I felt like I had to read it – and afterwards I joined the legions of romance readers who were singing its praises.Mili Rathod was married at the age of four to the grandson of a wealthy man in her village. Both bride and groom were children, and shortly after the ceremony the little groom was whisked away by his mother – and Mili hasn’t seen her husband now for twenty years.But Mili is doing well in her new life working for the National Women’s Centre in Jaipur, so much so that she’s given the opportunity to travel to America and study at a school in Michigan. Mili jumps at the chance, both to further her career prospects but especially because she knows her husband, Virat, is a successful pilot in the Indian Airforce and she wants to make herself worthy enough that he’ll return to her one day.Samir Rathod is a big-shot Bollywood writer/director, frequently featured in the pages of gossip magazines as much for his good looks as his many famous female conquests. When his brother, Virat, receives some troubling communication from the girl he married as a child, Samir offers to fly to Michigan and get this illegal marriage annulled once and for all. Virat and his wife have a child on the way, and Samir would do anything to help avoid either of them being hurt by this gold-digger. But when Samir meets Mili he doesn’t discover the conniving money-grubber he thought he would. Mili is an innocent and strong young woman who sparks his creative imagination and tender side … when he decides not to reveal his true identity, Samir finds himself falling deeper and deeper into both the biggest lie and most important relationship of his life.The title ‘A Bollywood Affair’ actually doesn’t have a lot to do with the story – yes, Samir is a Bollywood writer/director but that’s such a marginal aspect of the story, and indeed Samir’s own character history. The Bollywood mention in the title is more to signal readers what a romance-ride they’re in for with this book – looking back, it had practically every romance plot thrown in (man falling for his brother’s wife, virginal heroine, arranged marriage, false identities and famous hero). This is an over the top romance, similar to OTT Bollywood storylines. But much like a colourful-kitsch Bollywood film entertains and dazzles regardless of abundance, so too does ‘A Bollywood Affair’ charm and delight even while playing out otherwise cliché romance tropes.Part of the charm of Sonali Dev’s romance is that it is a unique story – for Western romance readers. Dev beautifully weaves Indian culture and custom into the storyline – everything from family hierarchy to food and cooking is covered – and of course the Indian culture is the book’s backbone. Mili and Virat were part of an arranged marriage, and a big focus of the book is on the fact that Mili comes from a relatively poor village and has very different customs to those of Virat and Samir. Certainly, Mili is dumbfounded when she learns that Samir is a big-shot Bollywood celebrity and has a history of rather scandalous relationships with women – Mili, by contrast, has remained pure for her absent husband all these long years, and is a very sheltered woman:


Even in her village, she was the youngest girl to have been married. And she had to be the only girl on earth who had no idea what her husband looked like after twenty years of marriage. She has never left her village until she was twenty years old, except for a school trip to New Delhi when she won an essay contest at fifteen. And until she was twenty-four she had never even left her home state of Rajasthan.

Dev plays this out so well – she’s actually saying a lot about the patriarchal makeup of Indian society, even while she herself is writing a far more progressive romance set in this culture. For one thing, Mili works for the National Women’s Centre in Jaipur – a job that is in itself tied into Women’s Empowerment in that country which has a well-publicised issues with violence against womenAnd of course ‘A Bollwood Affair’ is a far steamier romance than traditional Bollywood films (which famously don’t even show kissing scenes). Mili and Samir are a really interesting pairing – particularly because it’s as much Mili’s kindness and loyalty as her attractiveness that endear her to Samir. This is also a big statement – that the previously superficial, playboy Samir finds something truly remarkable in Mili that moves him to change (rather than Mili’s previous assumption that she has to become more worldly and cultured to appeal to her absent husband, Virat). Samir and Mili do spark on the page – she’s challenging and confrontational when needs be, and he reveals a nurturing side around her. It’s a really beautiful, interesting dynamic to read. And there is none of that Bollywood modesty in this book, rest assured – their eventual coupling is among the steamiest I’ve read from this year’s crop of romances.I will say that – much as a Bollywood film presents high-octane drama to draw a close – the end of ‘A Bollywood Affair’ felt a little muddled at times. Characters fill scenes and talk over one another, storylines bump heads and timeline goes back and forth to the point that I had to read very carefully to orientate myself within the final scenes. But that’s a small complaint in a book that was such an enjoyable read.‘A Bollywood Affair’ deserves all the praise it has been reaping this year, and with this impressive debut Sonali Dev has cemented herself as the new romance author to read.