'All the Bright Places' by Jennifer Niven 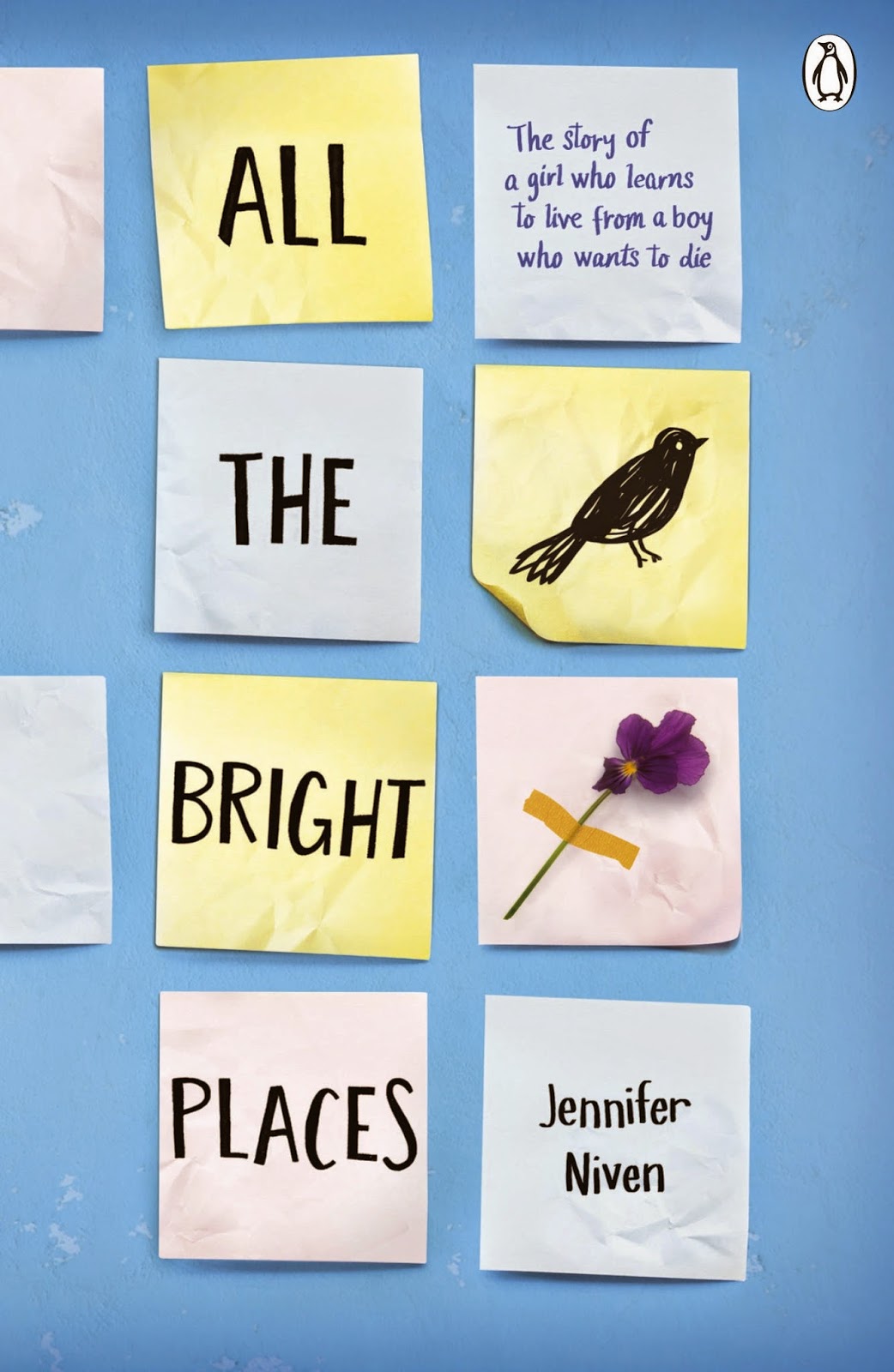 Theodore Finch wants to take his own life. I'm broken, and no one can fix it.

Violet Markey us devastated by her sister's death. In that instant we went plowing through the guardrail, my words died too.


They meet on the ledge of the school bell tower, and so their story begins. It's only together they can be themselves . . .

I send a message to Violet: 'You are all the colors in one, at full brightness.'

You're so weird, Finch. But that's the nicest thing anyone's ever said to me.

But, as Violet's world grows, Finch's begins to shrink. How far will Violet go to save the boy she has come to love? 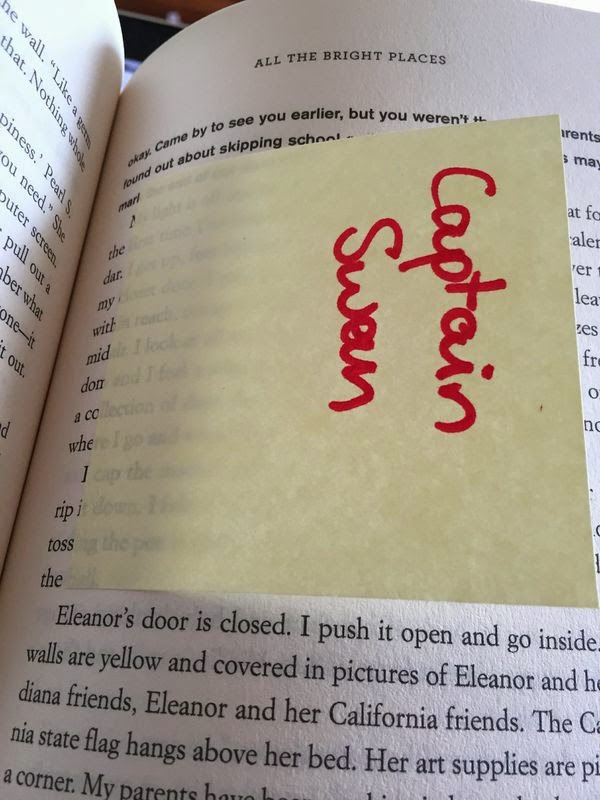 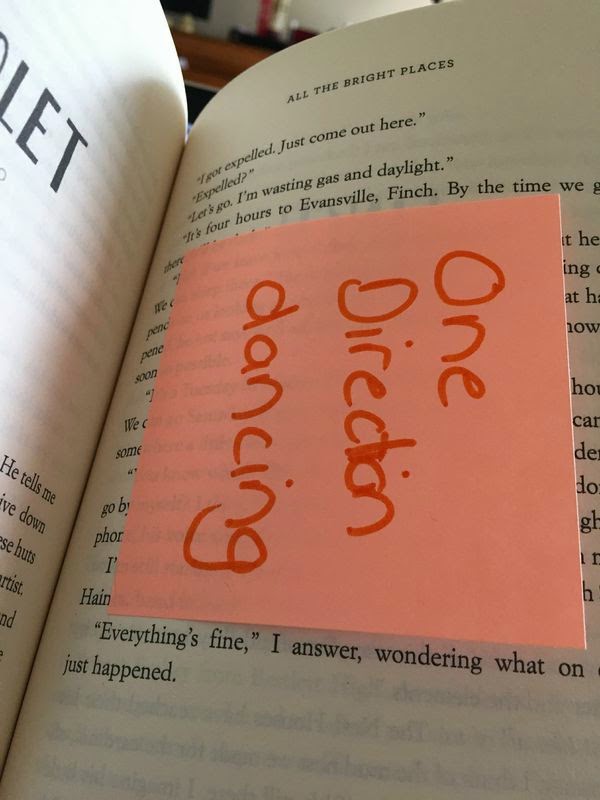 ‘All the Bright Places’ is the new contemporary young adult novel by Jennifer Niven.

I first heard about this book because it caused quite a stir in the youth literature world, when film rights were bought before it had even hit bookshelves – with wunderkind Elle Fanning attached to play one of the lead roles. Pretty quickly I read it likened to John Green’s The Fault in Our Stars crossed with Rainbow Rowell’s Eleanor & Park as the “next big thing” – which is a surefire way to put me off and turn me into an instant sceptic.

Then I received an advance copy from Penguin Teen Australia, along with a letter from the author. It was the letter that really intrigued me, as Niven explained the circumstances around the idea for her book being the sudden death of her literary agent: “part of me wanted to just stop. Stop writing, stop working. But another part of me said no, push through this, and don’t just push through it, make something great happen.” Intersecting with her grief were sudden memories of the first boy she ever loved, and Niven concluded her letter; “All the Bright Places was written about a very hard, sad, lovely time during a very hard, sad, stressful time – but in just six weeks, the book was born.” Cutting through all the PR rhetoric of “next big thing” and “if you liked X and X, you’ll love Y!” – this brief letter was Niven putting her heart and dark inspiration on the page, and I was impressed.

There’s more painful beauty in the story itself – the story of Theodore Finch and Violet Markey who become each other’s unlikely saviours in the worst of circumstances. Theodore is fascinated by death, and constantly thinks of ways he might kill himself. Violet Markey lives for the future, counting the days until graduation, when she can escape her Indiana town and her aching grief in the wake of her sister’s recent death. The explosive opening chapter has them meeting on the ledge of their school’s bell tower – in a case of ‘girl and boy save each other,’ which carries throughout the book. But when death keeps encroaching on Theodore’s thoughts, Violet doesn’t know how she can keep him here and keep him safe from himself.

Jennifer Niven has written a beautiful balancing act in ‘All the Bright Places’ –at once a thoughtful exploration into mental illness and teen suicide, lightened with a first-love story of tender honesty;

I feel like I’m living for these moments – the moments when I’m just about to lie down beside him, when I know it’s getting ready to happen, his skin on mine, his mouth on mine, and then when he’s touching me and the electric current is shooting through me everywhere. It’s like all the other hours of the day are spent looking forward to right now.

We kiss until my lips are numb, stopping ourselves at the very edge of Someday, saying not yet, not here, even though it takes willpower I didn’t know I had. My mind is spinning with him and the unexpected Almost of today.

When he gets home, he writes me a message: I am thinking rather consistently of Someday.

This is a very thoughtful book for how Niven delves into mental illness and suicide – two topics that may make parents and schools wring their hands in worry when their children (inevitably) find their way to this bestseller. But these are not topics to fear, especially when they’re explored in youth literature and with an author like Niven – even her Author’s Note is a thoughtful coda on the topics: “If you think something is wrong, speak up. You are not alone. It is not your fault. Help is out there.” And a number of organisations are listed – those for suicide prevention and mental illness diagnosis as well as anti-bullying organisations.

The book does take an (inevitable) dark turn – it’s foreshadowed from the first page, when our fated heroes meet atop a ledge. But Niven lays the groundwork so well that when the worst happens, a cast of stellar secondary characters help fill the void – highlighting the impact on those left behind, and the strength of them to survive after such loss.

I do appreciate why this book was compared to the likes of The Fault in Ours Stars and Eleanor & Park – there is loss and sadness here, and such books do have same themes and even romances that follow a similar trajectory. But perhaps their kindest comparison is because such authors take the pain of life and colour it with hope for young readers – and that’s why these book stand out and leave their mark.

All the Bright Places is a favourite of 2015; I can’t wait for the film adaptation and to read more from Niven.