'Pieces of Sky' by Trinity Doyle 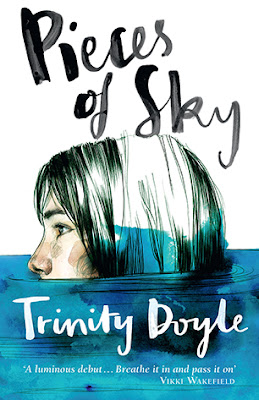 Lucy's life was going as smoothly as any teenager's could. She was the state backstroke champion, and swimming obsessed. She lived with her parents and her brother, Cam, in the small coastal town she'd known all her life.

She had friends, she had goals - she had a life. Now Cam is dead, her parents might as well be - and Lucy can't bear to get back in the pool. All she has to look forward to now is a big pile of going-nowhere.

Drawn to Steffi, the wild ex-best-friend who reminds her of her artist brother, and music-obsessed Evan, the new boy in town, Lucy starts asking questions. Why did Cam die? Was it an accident or suicide? But as Lucy hunts for answers she discovers much more than she expects. About Cam. About her family. About herself.

A soaring, uplifting novel about love and loss from an exciting new voice.

‘Pieces of Sky’ is the debut young adult novel from blogger Trin in the Wind … now known as Australian author, Trinity Doyle!

I actually gasped when I read the first line of this book;

And then I got chills as I kept reading …

It was beautiful, if such a thing can be – the waves of the ocean, gradients of green to blue mixed with the white of sea foam. Despite the grim irony that the ocean which smothered his lungs should cover him in death, it suited him.
Cam was made with more water than most.

… Yeah. Pretty gasp-worthy, goosebump-inducing – right? And it just gets better from there.

This is a story of grief, love and loss – playing out in a small coastal town that reads so real you can practically smell the briny air between the pages. This is the story of Lucy, whose older brother Cam drowned eight weeks ago in mysterious circumstances that leave his family reeling, and Lucy in particular struggling to keep her head theoretically above water.

Lucy’s mourning is compounded by the strange text poems Cam’s old mobile phone keeps receiving, from an unknown number – leading Lucy to follow one last mystery about her brother, in the hopes that whoever is sending these poems can shine more light on his drowning death.

And life goes on around Lucy and her family as they struggle to find a new normal – she reconnects with an old friend called Steffi, quits the demanding swim team she once loved, meets the beautiful music-obsessed new boy in town, and confronts the complicated feelings she’s always had for Cam’s best friend, Ryan.

The book has a slight ‘The Sky is Everywhere’ plot feel, as both Jandy Nelson and Trinity Doyle explore the sudden death of an older sibling mingled with the protagonist’s burgeoning lust for two boys. But ‘Pieces of Sky’ is infused with that indelible something that marks all realistic Aussie YA – the characters being gloriously imperfect, emotions hard-edged and young love addictively complicated.

I particularly loved the minor characters in this book, who were just as poignant as our protagonist. Lucy’s Aunt Deb has come to live with the family and help her mother in particular cope in the aftermath of Cam’s death, and I loved this character that manifested as a constant reminder of how undone Lucy’s life has become. I also loved Steffi – Lucy’s childhood friend she drifted away from as her commitment to the swim team took over her life. Steffi is a little bit wild, and doesn’t always give Lucy the right kind of shoulder to cry on – but I really responded to this girl who refused to be delicate with Lucy’s grief and actually challenged her;

‘Is this a thing you’re doing?’

‘Yeah, a thing. A stop-swimming-avoid-the-water thing.’

I concentrate on the dyed red top of Steffi’s ear, grabbing a washer and trying to get it off.

‘Look, I get it, I really do,’ she continues, ‘but you live between three beaches and a lake. Are you just planning to walk around with your eyes shut?’

Evan is the new boy in town – a music aficionado, hang-glider who understandably catches Lucy’s eye. But her attraction to him is compounded by everything else that’s going on in her life – and I really appreciated how inconvenient her feelings for him were in the wake of Cam’s death. I did like Evan and definitely see him as swoon-worthy, but sometimes I wished we could pull away from Lucy’s romance with him, to focus more on her family life, … or the other man in her romantic life, Cam’s best friend Ryan who she’s always had a crush on.

Like Steffi and Aunt Deb, I loved Ryan as a periphery character who’s an inconvenience for Lucy, but real fascination for the reader. These three in particular for me were examples of how death and grief come charging into our lives and the ricochet is felt in every aspect - so I loved that it was only in the wake of Cam’s death that Lucy feels compelled to explore this thing with Ryan, that she’s never been brave enough to touch on before … but it comes at the worst time as she meets and falls for Evan too.

I will say that I thought Ryan’s role in the story was going to a very different place than he ended up … [SPOILER: highlight to read] I was so convinced that Ryan was sending the secret texts, and that he and Cam had been in love and this whole story would go on to explore the increased risk of suicide amongst young people in the LGBTQI+ community …. I was so wrong, and that’s okay. The poetry-text mystery provides some beautiful vignettes that highlight Trinity’s versatile voice.

I probably could have stayed in this world for another 100 pages or so – only because I thought the romance had eclipsed some of the exploration into Lucy’s home life that I would have liked resolved and explored a little bit more in the end. But also because I just loved Trinity’s voice so much, I wanted to stay reading her for a little bit longer. In any case, I thoroughly enjoyed this book and I’ll be eagerly awaiting whatever Trinity Doyle writes next!