'Me and Earl and The Dying Girl' movie review 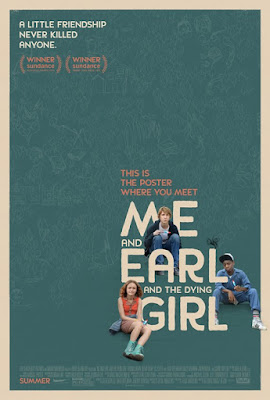 High schooler Greg, who spends most of his time making parodies of classic movies with his co-worker Earl, finds his outlook forever altered after befriending a classmate who has just been diagnosed with cancer.

Last night I had the pleasure of attending a screening of ‘Me and Earl and the Dying Girl’ at the Melbourne International Film Festival. I had good company in Adele (Persnickety Snark), Braiden (genius behind #LoveOzYA Twitter feed) and Kimberley (Pop Couture). 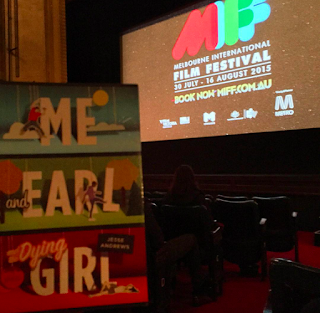 ‘Me and Earl and the Dying Girl’ is the long-awaited film adaptation of Jesse Andrews’ amazing 2012 young adult novel of the same name. Andrews actually wrote the screen adaptation (unbeknownst to me until last night, Andrews was a playwright before he penned his debut YA novel) and Alfonso Gomez-Rejon directed.

Let’s just get something out of the way first, shall we? ‘The Fault in Our Stars’. Yes. I know. They’re both teen comedies/dramas about cancer, adapted from insanely popular YA “sick lit” books. Considering John Green’s TFiOS book came out in January 2012, and Jesse Andrews’ ‘Me and Earl and the Dying Girl’ March 2012, I think it’s safe to assume Andrews has been getting this comparison from day dot. The two don’t really bear comparing though – not as books, and not as movies despite the fact that Green’s movie juggernaut was released just last year. First of all – I think lumping these books/movies together as “sick lit” and therefore same-same pays disservice to the breadth and dignity that the subject of death and dying deserves in the YA readership. And secondly … even calling them “kids with cancer movies” or “sick lit” kinda misses the whole point of the stories trying to be told. ‘Me and Earl and the Dying Girl’ in particular, is presenting this idea that people are more than one thing – and it’s up to us to see and celebrate the journey it takes to discover all their facets, and that rings especially true for the “dying girl” of the title who doesn’t want to just be known or remembered as such. So – with that cleared up – on with the review!

I absolutely, whole-heartedly adored this film. I was so excited when I heard it would be adapted – let alone that Jesse Andrews would be penning the script himself! And I’ve got to say, ‘Me and Earl and the Dying Girl’ now enters into that exclusive club of “movies that are better/on-par with the equally amazing book.” I know – it doesn’t happen often, but lightening was caught in a bottle with this one, people – and it’s glorious!

Thomas Mann plays our protagonist, Greg Gaines – a nation of one in the battlefield of high school, and that’s just the way he likes it. He’s a very self-conscious teenager, lacking in self-confidence and with a serious hang-up about his ferret face. I will say that in the book, Greg is also a little bit fat – and his weight was a great source of discomfort and embarrassment for him. There was a part of me, when Thomas Mann was cast, that was disappointed that we wouldn’t get to see a male teen character with these body hang-ups – but Mann did such a smashing job as Greg, that I’m willing to overlook.

Greg’s co-worker (really “friend”, but Greg doesn’t use that word) is Earl, played by newcomer RJ Cyler. Earl lives on the rougher side of their Pittsburgh suburb, and has known Greg since they were in Kindergarten. Over the years they’ve bonded (as much as Greg is willing to bond with anyone) over their shared love of cinema, and dedication to recreating classic films with their own quirky twists (like ‘Sockwork Organge’ and ‘Eyes Wide Butt’). 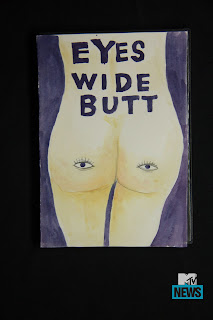 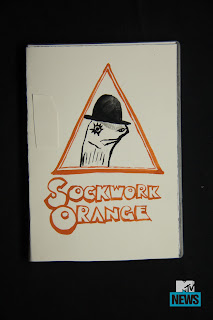 When Greg’s mum (played by the incomparable, Connie Britton) and father (Ron Swanson/Nick Offerman) tell him some bad news about a girl at school that he’s kind-of-not-really acquainted with, he’s strongly encouraged to spend time with Rachel (Olivia Cooke) as she begins treatment for leukemia.

What evolves is a “doomed friendship” with the dying girl of the title, and a quietly powerful and tragically believable journey for this guy who refuses to get close to anyone.

‘Me and Earl and the Dying Girl’ is FUNNY. I spent about 90% of the film cracking up – and I think it could have been 95% was it not for the sheer volume of people’s laughter in the Comedy Theatre, drowning out what I’m sure were more brilliant lines. The humor is actually quite different to what’s in Jesse Andrew’s book – a lot of the script felt very, very fresh. I only got halfway through my re-read of the novel, but even with just that 50% of the book still fresh in my mind I was really impressed at how malleable the story was for the screen. I will say that where the TFiOS film was all about hitting those tumblr-quotes and recreating certain scenes pitch-perfectly for the fandom, ‘Me and Earl and the Dying Girl’ felt a lot more flexible in that Andrews had a keen eye/ear for what worked on the page but wouldn’t translate to film and needed to be reimagined. So, for instance, he took Greg’s opening about ‘it was the best of times and it was the worst of times’ and turned it into a stop-motion animation joke featuring “the hot girl from Pussy Riot” and man-eating sharks swimming in acid.

The other thing I noticed was that Earl’s character was toned down quite a lot – in the book he’s full of machismo anger and violence that’s tied into his home-life … sadly, Earl’s background info is chopped out quite a bit, but thankfully so is his expletive-ridden rants. It worked in the book and was quite funny while also being confronting – especially the way he spoke about girls and women and their bodies (which was then altered as he got to know Rachel). In the film it’s watered right down to an utterance of “titties” – but RJ Cyler still had such intensity to Earl, like he could be a tightly-coiled spring or a laid-back champ. Jesse Andrew’s humour still shines through in this film – even with some of his most memorable book jokes cut out (a lot of stuff around Greg’s embarrassing history with Rachel and girls generally, for instance). It means that lovers of the book will come to this film and be thrilled for the new words from this magnificent author. 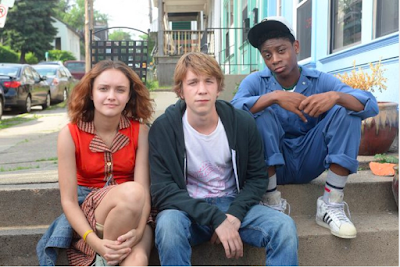 I also think Andrews should be commended for letting the young stars shine with this script … yes, Nick Offerman and Connie Britton are big stars to be playing Greg’s parents (and perfectly cast to appeal to that hipster-indie crowd, who are no doubt Friday Night Lights/Parks and Rec aficionados!). And Molly Shannon does a great turn as Rachel’s single mum who is not coping with her daughter’s illness, and ventures into hilariously inappropriate territory … Jon Bernthal also plays favourite teacher Mr. McCarthy (“Respect The Research!”) who could have slipped into typical adult-imparting-wisdom mode, but isn’t allowed to when Greg’s the one who makes the bigger gestures. Because the adults are very much backseat passengers in this film, only ever on the periphery and sometimes even just talking off-camera while the shot stays on the kids. Because it is Mann, Cyler and Cooke who absolutely shine in this film – and they’re allowed to with Andrews’ brilliant script and Alfonso Gomez-Rejon’s keen eye. There were a lot of uninterrupted shots when the camera was just left to focus on exchanges between these actors – and it was marvelous for letting audiences see the waves of emotion, and the actors spar with one another. This film totally hinged on the ‘Me’ (Greg) Earl, and Dying Girl Rachel and the chemistry of these three actors totally makes this film.

A keener cinephile than me could probably have played a pretty decent drinking-game for all the head-nods and references to classic cinema that are strewn throughout the film. But for me I’ll say that Alfonso Gomez-Rejon’s direction and Chung-hoon Chung’s cinematography were marvelous – sometimes it felt like homage to Wes Anderson, but not in a rip-off way, more in a loving “this is a film about loving film” kind of way. If that makes sense? And hats off to whoever scouted the filming locations around Pittsburgh – from the suburban streets lined with Queen Anne-style houses, to the long cafeteria gulf that did indeed look like the pirate-infested red seas.

I also love that it’s got more diversity in it than a lot of contemporary teen fare we’ve seen lately (okay, yes – I am talking about TFiOS again which, you’ve gotta admit – is pretty much white and middle class). ‘Me and Earl and the Dying Girl’ sees Rachel coming from a single-parent household, illustrates Earl’s being from the “rougher side” of town, and has a body-conscious male protagonist in Greg Gaines. These are all off-shoots to the wider discussion around not stereotyping people, and embracing the idea of continually learning new truths about those we’re closest to.

Gosh, I really did love this film.