'Dead Ever After' Sookie Stackhouse, #13 by Charlaine Harris 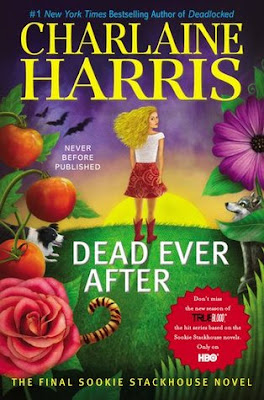 From the BLURB:
There are secrets in the town of Bon Temps, ones that threaten those closest to Sookie—and could destroy her heart...

Sookie Stackhouse finds it easy to turn down the request of former barmaid Arlene when she wants her job back at Merlotte’s. After all, Arlene tried to have Sookie killed. But her relationship with Eric Northman is not so clearcut. He and his vampires are keeping their distance…and a cold silence. And when Sookie learns the reason why, she is devastated.

Then a shocking murder rocks Bon Temps, and Sookie is arrested for the crime.

But the evidence against Sookie is weak, and she makes bail. Investigating the killing, she’ll learn that what passes for truth in Bon Temps is only a convenient lie. What passes for justice is more spilled blood. And what passes for love is never enough...

‘Dead Ever After’ was the 13th and final book in Charlaine Harris’s popular paranormal romance series; ‘Sookie Stackhouse’ which was adapted into the now concluded HBO TV series, ‘True Blood’.

So, ‘Dead Ever After’ came out in 2013 but I’ve only just managed to read this final book in one of my most beloved series from favourite author, Charaine Harris. Why so long? Well to be honest, I developed a bit of fatigue around this series. Twelfth book ‘Deadlocked’ left me seriously underwhelmed, and I was just never in the right headspace to bid farewell to beloved waitress Sookie Stackhouse, and read the conclusion to her colourful life. I thought perhaps the finale season of the HBO adaptation ‘True Blood’ in 2014 would ignite my curiosity to read how things wrapped up in Harris’s very different book series … but like many fans, I’d also grown weary of ‘True Blood’ by the end and was seriously underwhelmed by that finale.

Instead I took my time coming to this conclusion. Prompted by my re-watching DVDs of ‘True Blood’, and so enjoying the earlier seasons that hinged closer to Harris’s, world I found myself curious about the fictional waitress who first stepped out in 2001 book ‘Dead Until Dark’, and how her life ended up … though I had my suspicions (first put forth in my review of ‘Deadlocked’) and unsurprisingly confirmed by all the online spoiler chatter when ‘Dead Ever After’ came out to much fan ire and disappointment.

Look, ‘Dead Ever After’ does feel a bit like a Variety Special ending. There’s a whodunit that draws in several shady individuals from Sookie’s past, and prompts many of her strongest allies to descend on her little house to help her figure out who’s trying to get her thrown into jail. I was especially surprised to see weretiger Quinn coming to Sookie’s aid and getting a bit of page-time, only because I’ve always been annoyed that he departed the series and Sookie’s love life so suddenly and without much preamble (but I do suspect this was Harris getting him ready for appearances in then forthcoming series ‘Midnight, Texas’).

The book therefore has the rather transparent feel of a ‘Best Of’, as various characters (some of whom we haven’t seen since book #7) come out of the woodwork … and of course those human and supernatural friends are there to reiterate Sookie’s connection to the living world, to the daylight – hence the other side to this coin is the absence of some of the series’ favourite vampiric characters.

Eric hasn’t been himself since he won Sookie’s heart. He just hasn’t – gone was the charming lechery, the blunt flirting and the delicious push-pull of his affection for Sookie versus his vampiric nature. And given the fact that Charlaine Harris had long dispelled fan speculation about vampire-human babies, and Sookie’s want for a family of her own has always been so strong – she and Eric were doomed from the start, a more interesting flirtation than relationship that withers and dies in spectacularly dull fashion here in ‘Dead Ever After’.

As I sat on the front porch with a glass of iced tea, I examined myself to see if my heart was broken. I was so emotionally exhausted, I couldn’t tell. As I saw it, maybe melodramatically, Eric and I were struggling with the chains of the love that had bound us together, and it didn’t seem we could either break free of those chains or resume them.

This is perhaps the biggest disappointment of the book – that one of Harris’s most beloved and colourful characters was allowed to become so mundane and predictable. I can only hope that she has a short story or ‘Midnight, Texas’ appearance in store for him in the future, to reclaim some of his – what Sookie refers to as, – ‘joie de morte’ that definitely petered out over the drawn-out course of the ‘Sookie Stackhouse’ series.

But otherwise I did kind of enjoy this finale book. I know many people complained about a lacklustre ending (mostly tied to the lack of Eric, and his muted nature in the scenes he does appear in), but I thought the mystery was decent (if a little overwrought) and I liked how changed Sookie is in this book from the first. She’s a little more bloodthirsty and headstrong, not so quick to comfort those who have made mistakes and just generally feels like a different woman (something I’d expect after 13 books).

Regarding Sookie’s final romance … look, I wish this had been pulled out a lot earlier, maybe at around book #10 to start really teasing out Sookie’s final happy ending and because I do genuinely think the coupling is a good one that makes a lot of sense, I’d have actually liked to read them play out a little more than the bare-tasting we get in this finale. That being said – I’m good with where Sookie ended up. And I’m good with the final book, and thoroughly enjoyed reading new (to me) words from Charlaine Harris, who has an indelible style;

“’Maybe’ is such a bad word,” I said. “You can ‘maybe’ yourself back to Adam and Eve and the serpent.”

This series isn’t my favourite of Charlaine Harris’s (‘Lily Bard’ and ‘Aurora Teagarden’ rank higher for me, followed by ‘Harper Connelly’) but I have enjoyed reading it since 2007 and have serious respect for how long Harris kept things interesting. I read the coda book ‘After Dead’ (which, yes, is awful and I won’t say anymore about it), but I was really touched by this note at the end from Harris that put Sookie into perspective;

In real-life terms, my daughter was in the first grade when I began; she graduated from college as the series ended.

Sookie was my best fictional friend for a long time. I lived almost as much in Bon Temps as I lived in the real world, and my protagonist and her life were never far from me.

‘Dead Ever After’ was not a perfect finale, but then again the last few books in the series haven’t lent themselves to high expectations … that being said, I was good with where Sookie ended up, even as I wished to have read her settled a little earlier in the series and for longer. I’m glad I finally caught up in this series, that I got a chance to say ‘see ya later’ to Ms Stackhouse; so much more than a waitress. 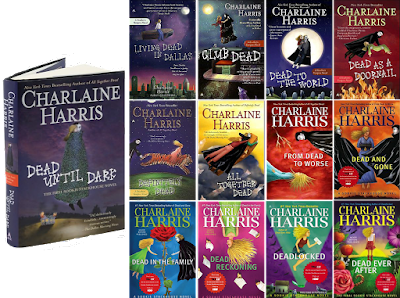