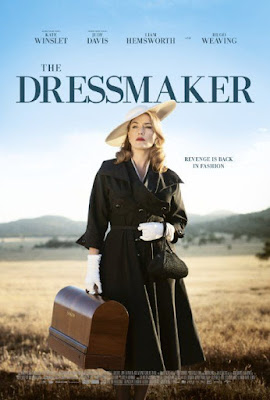 Based on the best-selling novel by Rosalie Ham, THE DRESSMAKER is a bittersweet, comedy-drama set in early 1950s Australia. Tilly Dunnage (KATE WINSLET), a beautiful and talented misfit, after many years working as a dressmaker in exclusive Parisian fashion houses, returns home to the tiny middle-of-nowhere town of Dungatar to right the wrongs of the past. Not only does she reconcile with her ailing, eccentric mother Molly (JUDY DAVIS) and unexpectedly falls in love with the pure-hearted Teddy (LIAM HEMSWORTH), but armed with her sewing machine and incredible sense of style, she transforms the women of the town and in doing so gets sweet revenge on those who did her wrong

Today I had the absolute pleasure of seeing a film I’ve been waiting about a decade for. ‘The Dressmaker’ is adapted from Rosalie Ham’s bestselling Australian book which first came out in 2000, and I studied in high school about that long ago too. Ms Ham actually came and spoke at my school, and I can still remember her telling us that she was currently writing a screenplay of the book – but that she wasn’t sure if the American production company would want the movie to be set in Australia or adapted to the bible-belt/deep south of America.

Well. It’s the year 2015 and ‘The Dressmaker’ is here – and it’s spectacular and spectacularly Aussie. Indeed, I couldn’t have pictured a film adaptation that took the Australia out of this country-gothic dark comedy tale, and watching the film (shot around Victoria in Horsham, Little River and Yarraville) I got tingles when I saw the town of Dungatar on the screen – bought so precisely to life. The lonely white gum trees and rocky-red dust bowl look, the rusted tin-roofs and sagging clapboard buildings. The distinctly Australian setting becomes a character unto itself, and a stark background to Tilly Dunnage’s unfolding tale of style and secrets …

I absolutely loved the book when I studied it in school, and I’m thrilled to report that the film is equally fantastic and one of the best adaptations I’ve seen. Kate Winslet is Tilly who returns home to look after her ailing mother (and town outcast) “mad” Molly … but she’s also returned home to discover the truth of why she was sent away as a child. The town of Dungatar is sure that Tilly murdered a boy, and Tilly is half-convinced of the rumour too, and sure it’s why she’s now cursed. But she also knows that Dungatar never had any love for her and Molly growing up, and if she wants to get close to the truth she’ll have to use everything in her arsenal to pry it out of them.

Tilly’s arsenal happens to be fashion. Haute-couture, to be more precise. Since running away from a Melbourne boarding school as a girl, she traveled from London to Milan and Paris, studying under the greats (Balenciaga!) and when she returns to Dungatar she’s a veritable fashion powerhouse – using her Singer sewing machine to create Dior-inspired and Tilly-originals to coax the vile women of Dungatar into a false sense of individuality and specialness …

The cast in this film is fantastic. Kate Winslet and Judy Davis clearly have a ball playing contentious mother/daughter pair Tilly and Molly, and there’s a beautiful balance of the absurd and heartbreaking between them. Liam Hemsworth as one of the few kind Dungatar townspeople who pursues Tilly romantically, despite her dire warnings of a curse, is at his charming best here – the role of Teddy McSwiney isn’t much of a stretch for him, but it’s lovely to see and hear a Hemsworth in a little Aussie role that suits him to a tee (and, look, at school my fellow classmates were dead-set on the likes of Beau Brady from ‘Home and Away’ playing Teddy so – Liam’s wonderful!). 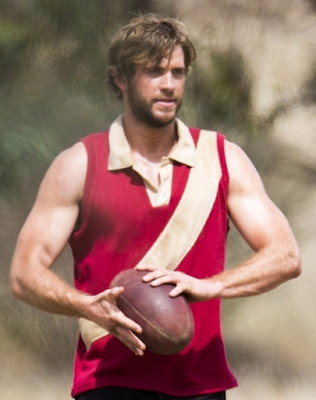 The film is choc-a-block with Aussie stars playing dastardly villains or defeated characters in the town of Dungatar – Shane Jacobson, Barry Otto, Shane Bourne and Alison Whyte among them. Some of these minor roles clearly got a bit jumbled in the editing; there’s a wayward flirtation between Rebecca Gibney and a shop-keep that just sort of goes nowhere … but then there’s Hugo Weaving as the kindly cross-dressing Sergeant Farrat, making up for mistakes in the past by befriending Tilly and coming to her and Molly’s defense – Weaving shines in the role and clearly had a ball.

Another stand-out was Sarah Snook as Gertrude 'Trudy' Pratt, an old classmate of Tilly’s who becomes one of her main clotheshorses.  Snook is in everything at the moment (coming off ‘The Secret River’ adaptation, now in ‘The Beautiful Lie’) and she’s just wonderful. In this film when the clothes are also characters as much as the setting, Snook is breathtaking in Tilly’s Dior and Balenciaga. The film is set in the 1950s so it’s vintage Dior and Balenciaga, darling – everyone looks like a Lauren Bacall and Katharine Hepburn throwback, and it especially suits Snook with her luminous, luminous skin and enviable hourglass figure. 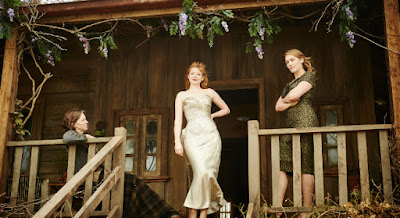 Kate Winslet is truly superb – of course she nails the accent, that’s one of her great strengths (remember 1994’s ‘Heavenly Creatures’?) – and she’s absolutely stunning in all of the vintage couture. But she really does justice to Tilly, a complex and fragile character beneath all those breathtaking outfits like suits of armor.

I t was great fun to see this story I’ve long loved come to life. Director Jocelyn Moorhouse has made a sumptuous film that frames the stark town of Dungatar as beautifully as she does the actresses swanning in the stunning gowns. The adaptation is one of the best I’ve ever seen, but then again Rosalie Ham had some great material on offer in her country-gothic tale of ball gowns and small-town brutality. I couldn’t believe how hard I cried in some parts, even as I vividly remembered having the wind knocked out of me when I first read the twists and turns in Ham’s book all those years ago … ‘The Dressmaker’ is a little Aussie marvel.
Posted by Danielle at 8:11 PM