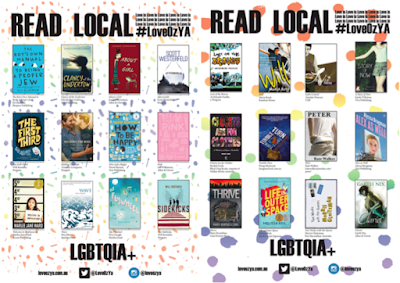 First came ‘Readalikes’, then the Genre Posters and now I’m thrilled to give you two LGBTQIA+ posters – celebrating Aussie Queer YA.

Talking and writing about Diversity in YA is something I’ve been invested in for a while now, and for me it always comes back to this one line that the character of C.S. Lewis says in William Nicholson’s play, Shadowlands;

We read to know we are not alone.

That’s it.
That’s the whole reason storytelling is storytelling and storytellers keep talking, writing, and performing.
Pretty simple, huh?
… Except when it’s not.
When you don’t find yourself in the pages of books; because every love story is boy-meets-girl and people want to put you into black-and-white, male-or-female boxes, or don’t understand why you’re happier being alone.

I didn't meet another openly gay person until I was in grade 12. That's a long time to rely on fictional characters for reflections of myself. And at that time, I didn't find any in books. That's why I started the #AusQueerYA tumblr. I wanted to coincide with the #LoveOzYA movement to help make Australian LGBTQIA YA stories more visible for those who need them, and make the people these characters represent more visible to everyone else. I'm so thrilled these posters have been made. I wish they'd been on the wall in my school library.
—      Michael Earp

That's why I wanted to put these posters out there; and I hope they make a difference, even just a dent. I hope they bring a little positivity after so much hate and bigotry swirling around in Australia recently. Especially because I can see there’s going to be a hard slog ahead in our politics for marriage equality. Safe Schools was gutted after a hate-filled campaign of ignorance and propaganda – and I fear it’s just the first of many strategies that won’t care what messages they’re sending to our young people, and the damage they're inflicting.

I told a friend I was doing this. They asked me why I was doing it. I told them I’m doing it for 10 year old me; not all of us are lucky enough to see 20 years.

As the debate rages I hope books will be a place of solace and understanding, for kids especially. I hope they find themselves in the pages of books – the books on these posters and so, so many more. And I hope they don't feel so alone, because they're not.

… and now, I have a few people to thank;

Jessica Harvie put her hand up to design these posters, and I’m so grateful to her – not only for her keen design-eye, but also her invaluable input into the books list too. Jessica is currently writing her honours thesis on queer YA. She is trying to start a blog over at editsandorangejuice.blogspot.com.au and tweets under @jlharvie.

And a couple of other people kindly helped me with compiling and weighing in on the list. I’d like to thank them profusely;

·      Amelia Lush, bookseller at Better Read Than Dead.
·      Michael Earp, who is also responsible for the wonderful #AusQueerYA tumblr.