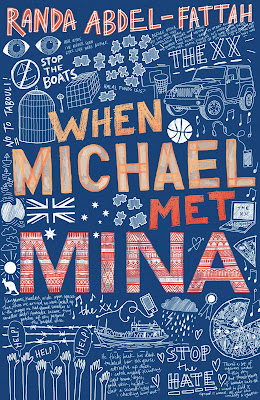 A boy. A girl. Two families. One great divide.

When Michael meets Mina, they are at a rally for refugees - standing on opposite sides.

Mina fled Afghanistan with her mother via a refugee camp, a leaky boat and a detention centre.

Mina wants to stop the hate.

When Mina wins a scholarship to Michael's private school, their lives crash together blindingly.

A novel for anyone who wants to fight for love, and against injustice.

Michael is a teenager growing up in Sydney’s North Shore. He gets good grades, has great mates, and parents whom he describes as ‘good people’ – but for most of his life they’ve been ‘angry about almost everything.’ Michael’s Dad is so angry and riled up, in fact, that he’s founded an organisation called ‘Aussie Values’ – rallying a group of like-minded people who want to “stop the boats” and the “Islamisation of Australia”.

Mina grew up in Kabul, Afghanistan. She and her family escaped the war-torn city then travelled to Pakistan, where they were interred in an equally uncertain and unsafe refugee camp, before booking passage on a leaky boat to the safety of Australia. From there her family were placed in a detention centre, where they waited until being granted asylum. That was ten years ago, and these days Mina’s family couldn’t be happier – especially since she’s just been granted a scholarship to a prestigious private school for the next two years.

The next time they meet will be at Michael’s North Shore high school, where Mina’s just won a scholarship.

Randa Abdel-Fattah’s ‘When Michael Met Mina’ is a timely and intelligent new contemporary YA novel. In many ways it is a modern Aussie suburban interpretation of ‘Romeo and Juliet’– A boy. A girl. Two families. One great divide. – Two households, both alike in dignity, in fair Sydney, where we lay our scene. Because for all that there’s a lot of political examination going on (and I’ll get to that in a moment) ‘When Michael Met Mina’ is also very much a romance. There’s undeniable chemistry when these two meet; and the tension of their two families and conflicting values make for a compelling if rocky love story.

But the political and social underpinnings of the romance is really where this book thrives, and finds unique footing in the Australian YA contemporary landscape.

In many ways it’s rather depressing to think how long this book has been in the making. The first I can remember being aware of such issues as Abdel-Fattah is touching on here, was the 2001 ‘Children Overboard affair’ of the Howard government. I have a friend for whom the rise of Pauline Hanson’s One Nation party (1997–2002) was the first he had an inkling of something being not-quite-right in Australian political rhetoric. For teenagers today I can imagine there are any number of events making them hyper-aware of the manipulation of media and empty-rhetoric of politicians when it comes to human rights and asylum seekers. From the deaths of Aylan Kurdi and Reza Berati, to the rise of politicians like Cory Bernardi, or the horrifying images out of war-torn Syria juxtaposed with the National Inquiry into Children in Immigration. Australian teen readers will be very much aware of the background to Abdel-Fattah picking apart these issues, but what’s fantastic is that she’s written characters who are closer to them than many of us can imagine.

Mina being a refugee who arrived with her family by boat, and Michael living in a household with angry parents entering into the political fray – and the book being written in alternate chapters from their perspectives – puts readers closer to these issues than they’ve maybe ever been. And while there are many instances of both Michael and Mina witnessing the wider social ramifications and community reactions, for the most part they are in the thick of the action;

The report ends with the reporter outside a mosque, telling the audience about some people’s fears of ‘creeping sharia’. There’s a shot of the man who’d harassed us in the restaurant. He’s a member of a new organisation that wants to stop the ‘Islamisation of Australia’. There’s a shot of the founder, Alan Blainey. Then there’s some file footage of a group of people at an anti-asylum seeker rally.

‘But is all this just fear-mongering?’ the journalists asks in the end.

A bit too late for that.

A lot of this book hits uncomfortably close to home, especially reading it as I did in the thick of an election campaign. Pauline Hanson has reared her ugly politics again, for instance, and the ‘Aussie Values’ of Michael’s father hints disturbingly hard at the United Patriots Front anti-Islam, xenophobic rhetoric. Indeed – the very concept of Michael attending an ‘Aussie Values’ rally while Mina wants to ‘stop the hate’ is a reference to the many United Patriots Front and ‘Anti-Racism’ rallies.

What I love though, is how slowly and thoroughly Abdel-Fattah teases out the fact that Michael needs to think for himself, and not just swallow his father’s rhetoric. Mina’s political and worldviews are clear – growing up a kid in Kabul, escaping with her family and ending up in a detention centre – but Michael’s growing up in his father’s household has influenced his opinions for far too long, and meeting Mina is what prompts him to seek truth through connection and reason.

‘I don’t worry about them,’ he says with scorn. ‘Do they know what I have seen? Do they think they can scare me after what I’ve been through?’

'When we arrived in this country we had to learn the differences of this new place and we had to also learn that for everybody we are the difference. I think, Mina, there is something the majority wants us to do in order to be fully accepted, but they never tell us what it is.’

This is a fantastic book with good timing – I can’t think of a better novel for kids to be reading this post-election, especially after a certain xenophobic senator is back front and centre in Australian politics. It’s a book that asks kids to think for themselves, and to look outside their own worldviews and walk a mile in someone else’s shoes. There’s a cracking good romantic subplot here, but the politics playing front-and-centre is what makes this book a thoughtful and intelligent winner. 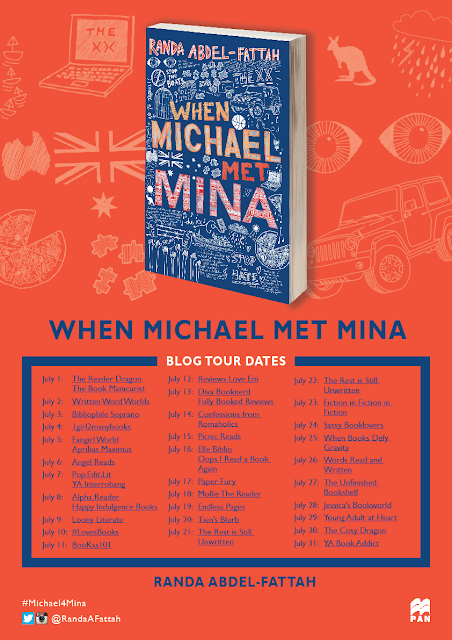