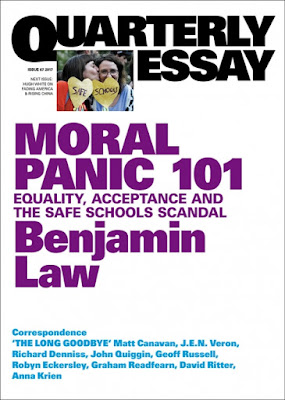 Are Australian schools safe? And if they’re not, what happens when kids are caught in a bleak collision between ill-equipped teachers and a confected scandal?

In 2016, the Safe Schools program became the focus of an ideological firestorm. In Moral Panic 101, Benjamin Law explores how and why this happened. He weaves a subtle, gripping account of schools today, sexuality, teenagers, new ideas of gender fluidity, media scandal and mental health.

In this timely essay, Law also looks at the new face of homophobia in Australia, and the long battle for equality and acceptance. Investigating bullying of the vulnerable young, he brings to light hidden worlds, in an essay notable for its humane clarity.

‘Moral Panic 101: Equality, Acceptance and the Safe Schools Scandal’ is the new edition of the Quarterly Essay by Australian author Benjamin Law.

The Quarterly Essay, if you don’t know – is an Australian periodical that straddles the border between magazine and non-fiction book. And I will confess, I am not a regular reader of the Quarterly. But given what’s happening in Australian politics right now, and in the lead-up to a marriage equality postal plebiscite – I found myself compelled to read Benjamin Law’s coverage of what has often felt like conservative-hysteria.

For those of you who are blissfully ignorant (or just, not Australian) the Safe Schools Coalition Australia is group of organisations in Australia focused on LGBTIQ people in schools. Its mission is to create safe and inclusive schools for students, families and staff who are in these groups.

But when a national (non-mandatory teaching) program was rolled out, conservative media pundits and pop-culture markers seemed to swirl around the organisation that eventually led to a perfect-storm of – as Benjamin Law perfectly summarises – ‘Moral Panic 101’.

This Quarterly Essay edition is Benjamin Law’s attempt to wade through the “fake news” and op-ed fallacy that has taken hold of the Safe Schools discussion, and especially eclipsed the reasons why Safe Schools was needed in the first place … to help LGBTQ+ youth who are at higher risk of suicide.

I’ve read this Essay about three times now. And bawled my eyes out each and every time. Not because Law uses particularly powerful prose or flowery imagery – but because he does the exact opposite. Offering up a refreshingly straight-down-the-line account of how Safe Schools got started, what good it was doing, and how it all came crashing down thanks to ulterior-motives and dollar-signs, it seems.

Some have asked me if they’ll have to be in the right head-space to read this Essay. Given the years of media beat-up of Safe Schools, and now the marriage equality survey that’s designed to decide human rights by straw-poll … it’s a fair enough question and one I don’t have a perfect answer to.

This is a hard read, but a necessary one. I actually wish ‘Moral Panic 101’ were mandatory reading for anyone about to vote in the marriage equality survey – since so many have wrongly tried to tie Safe Schools to marriage equality and a supposedly hidden LGBTQ+ “agenda” … It might be a nice change for those hell-bent on muddying the plebiscite waters, to read an essay on Safe Schools that relies on facts instead of fears.

But no, the reason I think this is a necessary read – no matter that it’s also bound to be a painful one – is because Benjamin Law treats the group at the centre of the Safe Schools program with the respect they have always been due, but rarely granted in recent years. Kids.

To read every article of the Australian has published on Safe Schools is to induce nausea. This isn’t even a comment on the content, just the sheer volume. In the year following Natasha Bita’s first February cover story, the Australian feverishly published nearly 200 stories either about, or mentioning, Safe Schools, amounting to over 90,000 words – four times the length of this essay. That’s at least one story about or mentioning Safe Schools every two days. This is a conservative count too, excluding the newspaper’s Cut & Paste sections and Strewth columns, as well as myriad letters to the editor. When I collated every article the Australian had published over this period into a single PDF, the resulting file was so large that my laser printer couldn’t handle it and I had to get it professionally printer and bound. The volume that came back is roughly the size of a standard PhD thesis. No one can claim the Australian isn’t thorough.

And yet, across this entire period, Australian – self-appointed guardian of the safety of children – spoke to not a single school-aged LGBTIQ youth. Not even one. Later, queer teenagers who followed the Safe Schools saga tole me the dynamic felt familiar. At school, it’s known as bullying. In journalism, it’s called a beat-up.

Benjamin Law talks to teenagers, especially. Those who are articulate, scared, hopeful, dejected, loving … he listens to them. He listens to how queer communities are helping them, and how Safe Schools worked or would have been appreciated by them.

Again, I will warn that this is a powerful read. If you’re like me and this all hits very close to home, it’ll definitely make you cry. But, look – the final chapter is called ‘The Kids Are All Right’. Because they are, and will be. Because no matter the outcome of this marriage equality survey, or the hate-filled propaganda of those who fear change … it’s still coming. In fact, it’s already here – in the young queer kids Benjamin Law speaks to, and the communities who are supporting and striving to understand them, instil respect for them.

The Kids Are All Right. It’s adults who have to learn to do right by them – all of them.

Oh, and P.S. — not that this has anything to do with Safe Schools continuing to be needed, or exist in some states, but for equality — 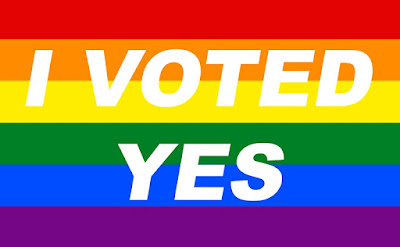