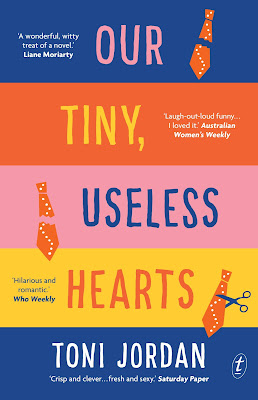 Henry has ended his marriage to Caroline and headed off to Noosa with Mercedes’ grade three teacher, Martha.

Caroline, having shredded a wardrobe-full of Henry’s suits, has gone after them.

Craig and Lesley have dropped over briefly from next door to catch up on the fallout from Henry and Caroline’s all-night row.

And Janice, Caroline’s sister, is staying for the weekend to look after the girls because Janice is the sensible one. A microbiologist with a job she loves, a fervent belief in the beauty of the scientific method and a determination to make a solo life after her divorce from Alec.

Then Craig returns through the bedroom window expecting a tryst with Caroline and finds Janice in her bed, Lesley storms in with a jealous heart and a mouthful of threats, Henry, Caroline and Martha arrive back from the airport in separate taxis—and let’s not even get started on Brayden the pizza guy.

Janice can cope with all that. But when Alec knocks on the door things suddenly get complicated.

Harnessing the exquisite timing of the great comedies to the narrative power and emotional intelligence for which she is famous, Toni Jordan brings all her wit, wisdom and flair to this brilliant, hilarious novel.

I did read this in December last year. But I clearly have brain-fog for the entire Christmas month and cannot for the life of me remember the reading clearly … so I spontaneously decided to re-read Toni Jordan’s comedy about love and marriage, and I was absolutely rapt.

This is the first Toni Jordan book I’ve ever read, but after doing so I (must have enjoyed it, back in December?) went out and bought her other novels ‘Addition’ and ‘Fall Girl’, and now that I’ve had a rebooted reading I intend to get stuck into those ASAP too!

I won’t even try to recount the plot of this book – instead I’ll say it’s a sort of modern Melbourne suburban take on Wilde’s ‘The Importance of Being Earnest’, except the comedy-of-manners is more a comedy-of-morons who’ve lost their heads and hearts to utterly foolish infidelities and self-inflicted heartburn. It really is wonderful!

Liane Moriarty provides an endorsement quote, calling it “cutting and clever, and yet so very romantic, as though P. G. Wodehouse had satirised life in the suburbs.” This is a very appropriate endorsee – because Toni Jordan’s novel did remind me of Liane Moriarty’s work, minus the seedy underbelly that goes with her explorations of love and betrayal. Jordan takes a much more light-hearted approach, that still manages to cut to the heart of the matter;

‘Something special, I mean. Your moment, whatever that means.’

He breathes out in a rush and leans against the side of the house, he tilts his head back and rests his hands on his thighs. ‘I think everybody feels like that.’

‘What if it never happens? What if we’re all here, getting ready, like our entire life is the night before the first day of school, and we’re waiting and waiting and the moment we’re preparing for – it never actually comes?’

Jordan’s novel is also a romance. Through and through. Which is great, and also caught me off guard because Toni Jordan is *so* beloved in Australia and especially by indie bookstores (again – wonderful! And what took me so long to get cluey?!) – but generally Melbourne publishing has an issue with romance … insofar as they don’t respect it very much. There’s no doubt that Jordan brilliantly weaves romance with marital dramas, family observations, and general suburban rot too;

‘When you ask the little boys in my class what they want to be when they grow up, none of them say “a man”,’ says Martha. ‘They all want to be boys for ever, but boys who have a magnet in their chest that prevents anything touching their heart. And that also powers their flying iron suit, so they can live in their penthouse with their car collection and play video games with their friends.’

… but all romance does this. Toni Jordan is writing contemporary romance, but I see her often getting labelled as ‘women’s fiction’ – but I hope romance readers of Australia are like me and have found their way to her hot, biting observations of the up’s and down’s of love. It’s totally worth it!