'How Not To Be A Boy' by Robert Webb, on audiobook 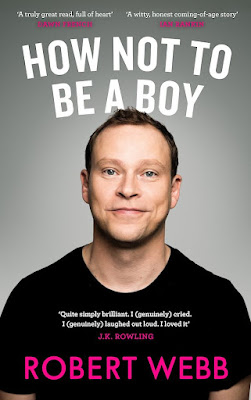 But Robert Webb has been wondering for some time now: are those rules actually any use? To anyone?

Looking back over his life, from schoolboy crushes (on girls and boys) to discovering the power of making people laugh (in the Cambridge Footlights with David Mitchell), and from losing his beloved mother to becoming a husband and father, Robert Webb considers the absurd expectations boys and men have thrust upon them at every stage of life.

Hilarious and heartbreaking, How Not To Be a Boy explores the relationships that made Robert who he is as a man, the lessons we learn as sons and daughters, and the understanding that sometimes you aren’t the Luke Skywalker of your life - you’re actually Darth Vader.

‘How Not To Be A Boy’ is the memoir from British actor, comedian and writer Robert Webb. I listened to the audio book, which is read by the man himself.

Robert Webb is one-half of the comedy duo ‘Mitchell & Webb’ – with David Mitchell. I can’t actually remember when I first “discovered” Mitchell & Webb, because it honestly feels like I’ve known them forever, in their long careers of various comedy shows appearing on the ABC. It was probably Peep Show at some point, but various sketches from their That Mitchell and Webb Look stand out more, only because various jokes have been carved into my family’s lexicon – like when they want to make fun of my love for home-reno and property shows, they’ll pull out Mitchell’s deadpan “how are shelves?” And especially with politics lately, any of us while watching the news can at any given moment ask; “Hans, are we the baddies?” and know exactly what we’re referencing (and feeling). I also have a deep love for their movie, ‘Magicians’, their TV show ‘Ambassadors’ was fucking fantastic and needed a second season, and latest venture ‘Back’ is bloody brilliant and I hope that one gets a second season at least! Oh, and individually - my parents are goddamn *obsessed* with David Mitchell on ‘Would I Lie To You?’

All of this means that when Robert Webb released his autobiography ‘How Not To Be a Boy’, I was always going to read it – but it was author Lili Wilkinson who raved about the audio book, and convinced me to come to his story that way. And boy, am I glad I did – because this has been a real treat in 2017, and a hands-down favourite listen/read. And – as it turns out – an absolutely vital one too.

‘How Not To Be a Boy’ has its genesis in the New Statesman, where Webb’s 2014 article on “growing up, and losing a parent” was such a visceral gut-punch and deep-bellied-laugh, that it unsurprisingly nabbed him a book deal for his memoir. If you haven’t, do read it as but a teaser of what is even more thoughtfully and hilariously investigated in the book itself.

The pivot-point of the novel really is the death of Webb’s mother when he was seventeen. The childhood he recounts is one peppered by the abuse of his father and this learned behaviour starting to be passed down to his two older brothers, and the sanctuary he found in a deep connection with his mother. When she passes away, he’s left in the care of mainly men – and the novel hones in on the overarching theme of how he avoided toxic masculinity (by first having to wade through it).

Of course, this is still a memoir of a comedic writer – so we are offered insight into how Webb went from being a shy child with little hand-eye coordination, to someone who’d perform a (rather rousing!) ‘Flashdance’ tribute on national television for Comic Relief. I felt real tenderness for young Webb, as he learns the thrill of comedic timing amongst his peers, and dares to dream of one day being famous … and his recounting early moments from his 20s, writing with David Mitchell is a little bit thrilling for a fan like me – being given some insight into their process.

But that’s not *really* what this memoir is about. Just as in his brilliant New Statesman article, Webb really is breaking down the patriarchy and our delusions of masculinity in a most relatable and thoughtful way – by pointing out how it’s all damaging horseshit.

I loved listening to this on audio book. It’s such a cliché to say that I laughed and cried, but I did – and then I wanted to go back and do it all again from the start. There are certain pronunciations and impersonations that I was so thankful I had Robert Webb himself to demonstrate for me, but really I loved it for his warmth. This book reads like a lay-it-all-on-the-line exposé, and Webb leaves nothing unsaid and no stone unturned (except perhaps for some teenage poetry). With steely-eyed wit and clarity he talks about abuse, alcoholism, grief, bisexuality, masculinity and love. There's so much love in this book. And to have Webb talk directly into my ear – even when his voice shook, sometimes – well, it was very special indeed.

I learnt a lot about Webb that I didn’t know, but has actually given new dimension to his writing and comedy for me – and actually, the creative process generally. Extraordinary to know the heartache and bullshit he went through, to be the kind of man he is today – who can confidently say that society’s male constructs are codswallop. And it struck me that one particular line about discovering the secret to Michael Jackson’s moonwalk, actually summarises the new sense of awe and respect I have for Webb;

Taking something to pieces doesn’t spoil the whole when you put it back together. You can still love the effortlessness, even when you’ve noticed the effort.