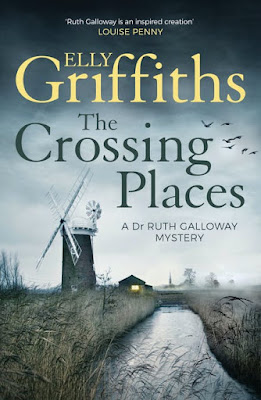 A child's bones are discovered on the windswept Norfolk marshes. Believing them to be ancient, the police call in Dr Ruth Galloway, forensic archaeologist. But this is no prehistoric grave. A cold missing person case has now become a murder investigation.

Dr Ruth Galloway is called in when a child's bones are discovered near the site of a prehistoric henge on the north Norfolk salt marshes. Are they the remains of a local girl who disappeared ten years earlier - or are the bones much older?

DCI Harry Nelson refuses to give up the hunt for the missing girl. Since she vanished, someone has been sending him bizarre anonymous notes about ritual sacrifice, quoting Shakespeare and the Bible. He knows that Ruth's expertise and experience could help him finally to put this case to rest.

But when a second child goes missing, Ruth finds herself in danger from a killer who knows she's getting ever closer to the truth...

'The Crossing Places' is the first book in UK author Elly Griffith's 'Ruth Galloway' series, which currently stands at 13 books with a 14th releasing in 2022.I bought this first book *ages ago* from a secondhand bookstore, because I recognised the 'Ruth Galloway' series as one that fans of ‘Rev. Clare Fergusson & Russ Van Alstyne Mysteries’ by Julia Spencer-Fleming recommend as a similar-read. And the main reason I knew it was a similar-read was the establishment of a slow-burn romance between characters, just like in Spencer-Fleming's books ... which is personally something that I find I need in my crime-series in order to hold interest, and alleviate the darker aspects of the story.So I've had 'The Crossing Places' sitting on my shelf for a while, and I only pulled it down because these last two weeks I've been in a real reading-slump and haven't been able to find anything that holds my interest. So I figured I'd go to my tried-and-trusted genre, crime-fic ... problem solved. Literally and figuratively.Ruth Galloway of the series title is a 39-year-old forensic archaeologist and college teacher who specialises in bones. One day a DCI Harry Nelson comes to her office at the local university requesting her presence at a possible crime-scene, because they've found some bones ... very specifically they've found bones in the saltmarsh and peet has preserved them in such a way that they can't at first glance tell if they're thousands of years old, or tied to a missing-child investigation Nelson is currently involved in.'Ruth Galloway' takes place at a fictional Norfolk area surrounded by saltmarsh (think of the Nine Lives Causeway and secluded Eel Marsh House, in the Susan Hill gothic novel 'The Woman in Black' for how this setting is pitched in Griffiths book too. Eerie and full of buried secrets.)It turns out that the body Nelson has is indeed two-thousand years old and from the Iron Age. A truly extraordinary find for Ruth to document ... but she also becomes intrigued by the case that the imposing Harry Nelson is investigating, linked to a historic disappearance of another little girl 10-years ago.So the setting for this book is truly brilliant - the saltmarsh and their sinking, glugging, muddy waters with the tide coming and going and buried forests in the ground is truly exciting and extraordinary, even more that Ruth has a house on the outskirts of the marsh and this desolate, beautiful landscape becomes spine-chilling fodder for the crime to unfold.I loved the twists and turns of this first book, even as a few of the characters and their connections became slightly too-outlandish and convenient for me to fully believe. I did pick the culprit early on, but throughout the book and with the introduction of red-herrings and new suspects I did find myself second-guessing ... and that's not at all a bad way to be reading a new crime writer.What did surprise me in this book is the Ruth and Harry connection. I was fully prepared for a slow-burn, maybe checking on fan-forums to see which of the 14-books I could expect some movement and action on the romance front ... so I was *shook* to discover that this relationship has a bit more kindling to it. And the many layers of complications it present by the end is pure genius.But I think the main reason I am excited to launch off into this series now, is Ruth herself. No, I didn't love the many mentions of her being overweight (this is probably the part that read the most 2009 poorly aged for me; it's not even other people commenting on her looks, it's Ruth's internal dialogue about herself on occasions that I just didn't need). Harry for his part, matter-of-factly says that Ruth isn't his type and is indeed overweight, but it's the way she carries herself that has him intrigued. She doesn't need him, or anybody it seems - she's self-sufficient and confident and that absolutely is a lure for him and readers too.I properly got into this first book and now I can't wait to dive head-first in 12 more!