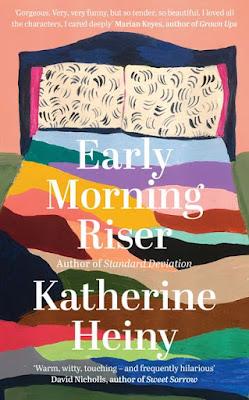 Jane sees Duncan's old girlfriends everywhere – at restaurants, at the grocery store, even three towns away. While she may be able to come to terms with dating the world's most prolific seducer of women, she wishes she didn't have to share him quite so widely. His ex-wife, Aggie, still has Duncan mow her lawn. And his coworker Jimmy comes and goes from Duncan's apartment at the most inopportune times. Jane wonders how the relationship is supposed to work with all these people in it. But any notion Jane has of love and marriage changes with one tragic accident. Now her life is permanently intertwined with Duncan's, Aggie's, and Jimmy's, and she knows she will never have Duncan to herself. But is it possible that a deeper kind of happiness is right in front of her eyes?

A novel that is alternately bittersweet and laugh-out-loud funny, Early Morning Riser is Katherine Heiny's most astonishingly wonderful work to date.

'Early Morning Riser' is the new contemporary fiction novel from US author Katherine Heiny, and my first book of hers that I've read.I believe the title of this book spins around the old saying; "Waking up early allows me to fill my cup before anyone else starts to drain it," or some variation thereof. It follows 24-year-old Jane who has just moved to Boyne City, Michigan to teach second grade when she gets locked out of her house one day and meets local locksmith, carpenter, and all-round handyman (in more ways than one) - Duncan. The two tumble into bed and a relationship pretty quickly - but Jane comes to realise that 40-something year-old Duncan has quite the history in the approx 2000 population Boyne City and surrounds. He's been around, and it seems to Jane that she's constantly meeting or bumping into his ex-girlfriends and bedmates. Including his beautiful milkmaid of an ex-wife, Aggie.Duncan is also closely tied to his co-worker; the developmentally challenged young man Jimmy - whom the town of Boyne City collectively looks out for, along with his Mama. And through a series of tragic events, it looks like Jane's life will begin inexplicably orbiting this town and Duncan's many relationships too ... forming a life she didn't precisely envision for herself, but is no less the one she maybe always wanted.I really loved this book. I didn't know what I was really in for with a fairly vague blurb, and an invitingly bright front-cover seeming to follow the illustrated aesthetic of many contemporary romance and 'women's fiction' titles ... but Katherine Heiny's other book ('Standard Deviation') came recommended to me, and so I was keen to try her latest release. I will say that 'Early Morning Riser' kept surprising me, and I loved it for that especially.If you need to hitch a theme or recurring thought to this story it comes in a small moment when Duncan's ex-wife Aggie comes round to Jane's house for a brief stay, and sees a chipped tureen sitting on the counter that she confidently proclaims is hers;

Jane stood at the door on the morning Aggie moved in, striving for an expression of warm and loving welcome, but the first thing Aggie did was gesture at the bowl of dried flowers on the kitchen table and say, "I believe that's my soup tureen."

"I'm sure you did." Aggie put her hands on her hips. "But it used to be mine. Duncan and I got it as a wedding present from the Mitfords. I recognize the chip on the handle. How much did you pay for it?"

"Ninety-nine cents," said Jane. (It had actually been twelve dollars.)

Herein lies the crux of the story. Jane is a humble elementary school teacher with a penchant for secondhand everything, up-cycling and thrifting. Heiny hilariously plays with this, that Jane is not an Instagram-influencer level of vintage-shopper; her outfits are often odd and ill-fitting, when her mother comes to visit she'll make snide comments about their weird amalgamation. But Jane is happiest in a thrift store and enjoys her ingenuity ... much as she appreciates Duncan's clear sexual experience gained from many former lovers. Until the secondhand, passed-down nature of both is explicitly pointed out to her. Then as much as Jane tries, she can't help musing on Duncan's very nature and whether or not he'll forever be wandering.That's a real over-simplification for what Heiny does here, ultimately. Especially because 'Early Morning Riser' is not following the typical trajectory of a contemporary romance. I kept expecting them, probably because Jane does too. She's that kind of relatable character and we're so beautifully given her interior by Heiny; that we expect her to be the classic movie-star hero of her own life ... there are many moments when I think we're built up to expect a big confrontation or AH-HA! moment, a loving declaration or accusatory revelation.But they don't come. Because this isn't a fairytale or movie. This is ... life. So the big revelations are quieter; they come in raised-eyebrows, what's left unsaid, inference rather than dramatisation. It really is the little things. A quiet life built together. Shared struggles and messy, complicated families.This comes back around towards the end, when Jane comes to a gentle understanding that maybe she's not the harbinger of her own bad-luck. That maybe the path she took was inevitable and self-determined because she chose her family, built them for herself - didn't have it all thrust upon her - and actually what she always thought of as 'bad luck' and her lot in life, is closer to the one she wanted all along.In the thrift store of life, Jane chose the pieces that spoke to her - chips and all.I really, really loved this story of quiet lives and building families. I will totally admit that because I came to it with my more commercial-fiction and romance genre background, I did find myself *wanting* and *yearning* for the big, definitive romantic declarations and revelations - and that I probably still had that desire by book's end, which didn't make for a fully-rounded reading experience for me. But much like Jane, I really ended up liking where the story took me.