'In: The Graphic Novel' by Will McPhail 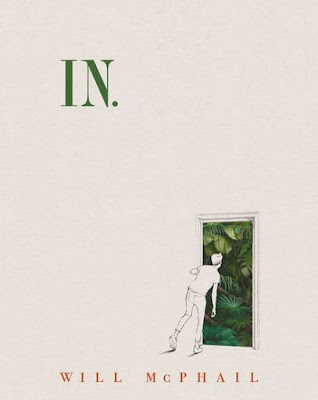 Nick, a young illustrator, can't connect with people. Whether it's the barista down the street, his own family or Wren, an oncologist whose life becomes painfully tangled with his, Nick can't shake the feeling that there is some hidden realm of human interaction beyond his reach. He staggers through meaningless conversations and haunts lookalike, vacuous coffee shops in the hope that he will find it there. But it isn't until Nick learns to stop performing and speak about the things that really matter that the complex and colourful worlds of the people he meets are finally revealed to him.

Illustrated in both colour and black-and-white in McPhail's instantly recognisable style, In is poignant, fresh and hilarious. McPhail transforms the graphic novel with a heart-wrenching compassion uncannily appropriate for our isolated times.

‘In.’ is the debut graphic novel by award-winning ‘New Yorker’ cartoonist Will McPhail.

I have loved Will McPhail for the longest time, and have been following him on Instagram for years. He’s one of the smartest cartoonists around, who can flip you on a dime – from painfully accurate social commentary, to thoughtful introspection on humanity. One of my all-time favourite pieces of his is ‘Lady No-Kids’ which I yearn to own as a print, and hopefully will one day if/when he restocks! His ‘Bedtime’ cartoon is another fave; but just generally I’m always eyeing his online store and hope to own a print one day!

I was thrilled when I heard that he had a debut graphic novel coming – even more that it would be an original work, not a collection of his cartoons. So excited was I, that I didn’t even wait for the August ANZ-release, but nabbed myself a UK copy from Foyle’s because it’s also signed with one of his signature drawings! I die! 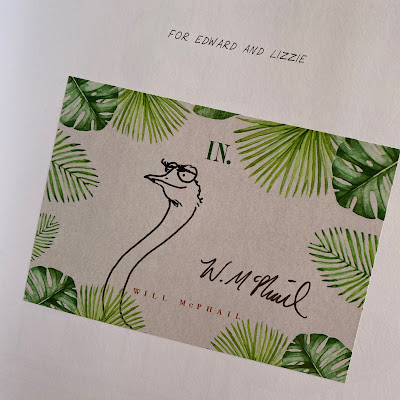 ‘In.’ is somehow exactly what I expected from McPhail, and at the same time so reverently surprising and arresting. It tells the story of Nick Moss, an artist much like Nick himself – he’s playing at being a sad man in a sad bar, where he meets young woman Wren who catches him entirely off-guard. What follows is Nick going about his life – helping his Mum fix a fixer-upper apartment, avoiding his neighbour whose sex-life he knows far too much about, juggling seeing his nephew and having deep-and-meaningful’s with his sister, spontaneous sexual encounters with Wren … until one day when he stops pretending and avoiding and just – confronts. He tells a little truth to the plumber who comes to fix his toilet, and gets a little truth right back. He’s honest with his young nephew, and is gifted openness in return. And with each exchange comes a surrealist exploration of a foreign land – intercut with the black-and-white line-drawings of Nick’s real life, are these full water-colour depictions of familiar-but-not, grand landscapes and dreamscapes. 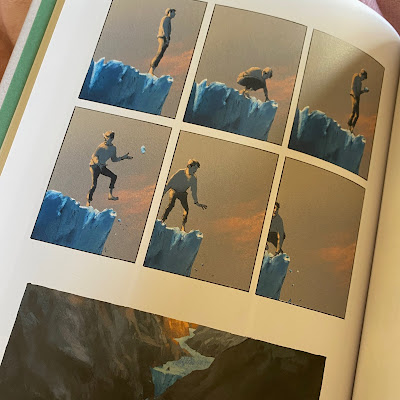 At the heart of this story – more than just a magical realist New Yorker cartoon come to life – is a very human story of connection, and time running out. A call to throw off the social mores and just … be.

This story was … phenomenal! I cannot believe how much I laughed, and then at the end how much I cried and was so deeply moved – not least because the story took an acutely personal turn for me, and it just hit beautifully hard. 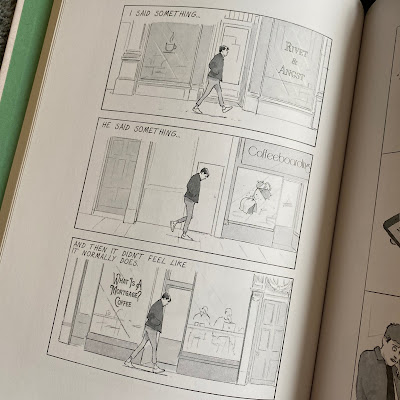 McPhail excels at highlighting the atrocious awkwardness of life – it’s in the wide-eyed, slack-jawed horrified facial expressions of his characters. The ‘Bob’s Burgers’-esque storefront vignettes told entirely in signage. Awkward naked bodies, arms flung high in a bad dance move, and self-conscious inner-monologues alongside snappy speech-bubbles. It’s all here in ‘In.’ – magnified and personified by Nick and this snapshot of his life when he feels like he’s circling something bigger than himself … like his memories of being “a slippery little penny of a boy,” at a childhood waterpark, with a slide like a coin vortex funnel. 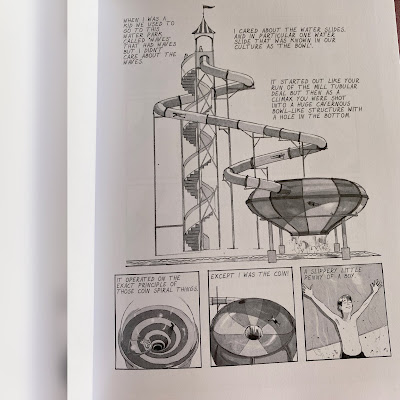 This novel was wonderful and painful. I laughed so much, and it got such tears from me too. It is one of the best reading experiences I’ve ever had, and as well as reminding me just how brilliant Will McPhail is (truly; even his ‘unboxing’ video was comedic gold) it showed me what graphic novels can be, and do. This is working on so many levels of sophistication and with such a feathery light touch, it will absolutely get under the skin and imprint on you.

Email ThisBlogThis!Share to TwitterShare to FacebookShare to Pinterest
Labels: Graphic Novel, Will McPhail