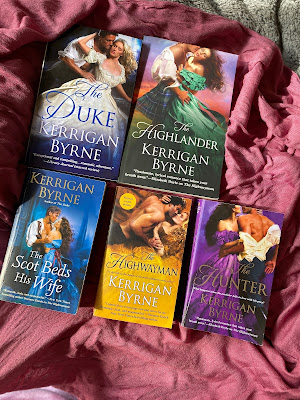 A young woman kidnapped by the villain who may be her long-lost love.

The actress who falls for the assassin hired to kill her.

The English governess who tames the wild Highlander widower.

The Victorian Rebels are most dangerous blackguards of society. They answer to no one and relish in their rebellion. But for the women who lay claim to their souls, their stoic fierceness is what makes these heroes so dark, and what makes their heroines want them like no other, in these three stunning historical romance novels from Kerrigan Byrne.

‘Victorian Rebels’ is a historic romance series written by Kerrigan Byrne and consisting of seven instalments (the last of which triggered a spin-off series called ‘Goode Girls Romance’). The series began in 2015, and there’s rumours of another instalment to come – but so far the last official book released in 2019, at which point Byrne began work on the spin-off and a new his-rom trilogy, ‘Devil You Know’.

I started reading ‘Victorian Rebels’ at the start of my state, Victoria’s (ha!), fourth lockdown and I finished by the time we were coming out of our fifth. And I totally reached for these books because I needed comfort-reads, and that for me is dipping into a good historical-romance backlist with plenty of books to sink me into. I also gravitated towards Byrne’s ‘Victorian Rebels’ because I really loved her (now completed) ‘Devil You Know’ trilogy, and something about her writing notorious “villain” heroes reminded me of Sarah MacLean’s ‘Bareknuckle Bastards’ series, which I’ll maintain is a good similar-read to Byrne.

I will say the main difference between MacLean and Byrne’s books though, is that while MacLean enjoys playing around with class and social stratification in her historical romance, and has been working hard at writing more nuanced male characters (something she speaks about with brilliant clarity; ‘How Trump killed off my romantic lead’), Byrne is not doing that. And that’s okay! She’s stuck to writing fairly brutish, thuggish Victorian-era men who also totally have layers, injuries, trauma, and deep affection to boot – but they do read *slightly* outdated for the conversations romance authors and readers have been having of late (and – totally worth acknowledging that Byrne’s series began pre-Trump, in 2015!). I’ll just say, the romance reading community has been having these long conversations about how we’re no longer into bodice-rippers and kidnapped heroines (there’s even a book about this; ‘Beyond Heaving Bosoms’) but that’s a recurring plot-point in ‘Victorian Rebels,’ to the point that it’s eventually spoken about with some joviality and in-joke repartee.

All that aside; I still found this to be an enjoyable series, with more ups than downs! We start out the gate strong with London underworld figure Dorian Blackwell – ‘the Blackheart of Ben More’ – kidnapping the Scotland yard clerk, Farah, presumably for nefarious purposes that eventually unravel to reveal that Farah and the Blackheart actually have a past that unites them … that past is what the series hinges on; as we learn that Dorian Blackwell was in Newgate Prison as a teenager, and befriended a ragtag group of abused fellow young inmates, until they formed a kind of gang to protect each other. This gang become the leading adult men of the series, with two deviations.

I’ll admit that book two ‘The Hunter’ dipped for me because the male lead – Argent, an assassin – had a really traumatic backstory in Newgate that I found really hard to read about, even as his romance with a London stage-actress he’s sent to kill (but ends up – yup! – kidnapping and saving) ended up in a decent place.

I was a much bigger fan of ‘The Highlander’ which is the first kind of deviation from the Newgate Prison group, and instead a tenuous “bastard half-brother” story is interjected to loosely connect them … this was by far my favourite book in the series, even as the male lead, Lieutenant Colonel Liam MacKenzie totally exhibited gross alpha behaviour on occasion – I liked this one for the heroine, ‘Mena’ – who is from the aristocracy but thrown into an “insane asylum” by her peerage husband (as an aside; Kate Moore has just written a fantastic biography about this subject; ‘The Woman They Could Not Silence’) and there’s a lot more progress for the female character in this instalment, partly spun around how much more progressive the Highlands are when it comes to things like; women’s sexuality, at least as it’s presented in this world. Liam and Mena were totally my favourite couple in this series, and the ones that I’m constantly looking out for as secondary characters making surprise appearances in subsequent books.

‘The Duke’ was a low point in the series, for me. Just … random characters, convoluted stories and all-round “meh”. ‘The Scot Beds His Wife’ was also surprisingly so-so (again; convoluted back-story and an annoying American plant for the heroine). But things really tick up again in ‘The Duke With the Dragon Tattoo’ – another favourite for me, and again because the heroine is more progressively written.

All in all – I really loved this series, I’d totally recommend it to Sarah MacLean fans and historic-romance aficionados who don’t mind slightly thuggish heroes who’ll come around to a gentler and more attractive place, eventually.