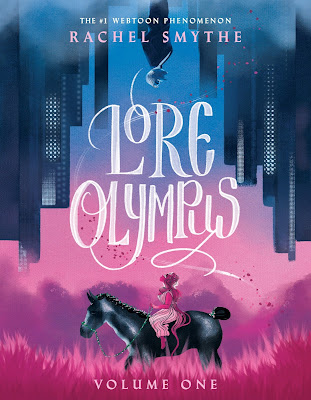 Scandalous gossip, wild parties, and forbidden love - witness what the gods do after dark in this stylish and contemporary reimagining of one of mythology's best-known stories.

Persephone, young goddess of spring, is new to Olympus. Her mother, Demeter, has raised her in the mortal realm, but after Persephone promises to train as a sacred virgin, she's allowed to live in the fast-moving, glamorous world of the gods.

When her roommate, Artemis, takes her to a party, her entire life changes: she ends up meeting Hades and feels an immediate spark with the charming yet misunderstood ruler of the Underworld.

Now Persephone must navigate the confusing politics and relationships that rule Olympus, while also figuring out her own place - and her own power.

So apparently Smythe started creating this web comic in 2018, and it is currently the most popular comic on Webtoon; as of January 2020 it had 299 million views. Confession though; I’d never heard of it. I just stumbled across the cover for Volume One on Goodreads and thought it sounded cool (I’m a sucker for Greek Mythology updates).

If you’re unfamiliar with the Hades and Persephone myth, a really good refresher is provided by YouTuber Lindsay Ellis – it’s one of the first ‘Beauty & The Beast’-esque stories and depending on who is telling and when, it’s either romanticised or given the villain edit. In Smythe’s ‘Lore Olympus’ it’s most definitely on the romantic side, though that does not mean it’s all squeaky clean retellings here … in fact, at the very beginning of Volume One there’s a content-note trigger-warning for sexual coercion and manipulation (though probably not from who you think).

Smythe’s Greek Mythology retelling has the feel and hedonism of a J. C. Leyendecker illustration, but with an almost ‘Fantasia’-like illustrative style … all solid hues, women with Betty Boop-curves and men sporting illustrated six-packs. It’s lush and also a little unformed … but that’s kind of true of the story too. It’s a ‘Gossip Girl’ meets ‘Suits’ and ‘American Psycho’ version of Olympus, the Greek Gods wearing nicely cut suits as they attend nymphe strip-clubs, Zeus and Hera conduct public spats and Goddesses walk around in tight mini-skirts and platform-heels with Ariana Grande high-ponytails. 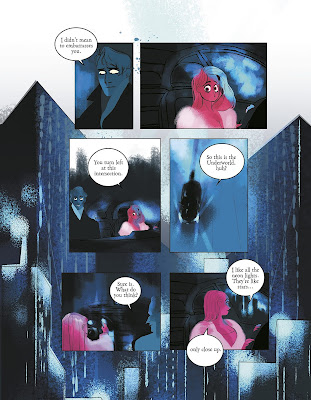 Is it revolutionary and cutting-edge with a new twist and spin on the ‘Hades and Persephone’? … I mean, no. Not really. It’s just very lush and a bit of a lightly hedonistic romp through the Greek Myths, nice enough but if I want to know more I think I’ll read the rest online.