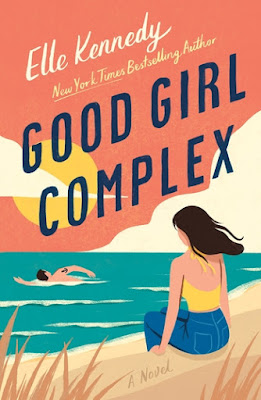 She does everything right. So what could go wrong?

Mackenzie “Mac” Cabot is a people pleaser. Her demanding parents. Her prep school friends. Her long-time boyfriend. It’s exhausting, really, always following the rules. All she wants to do is focus on growing her internet business, but first she must get a college degree at her parents’ insistence. That means moving to the beachside town of Avalon Bay, a community made up of locals and the wealthy students of Garnet College.

Twenty-year-old Mac has had plenty of practice suppressing her wilder impulses, but when she meets local bad boy Cooper Hartley, that ability is suddenly tested. Cooper is rough around the edges. Raw. Candid. A threat to her ordered existence. Their friendship soon becomes the realest thing in her life.

Despite his disdain for the trust-fund kids he sees coming and going from his town, Cooper soon realizes Mac isn’t just another rich clone and falls for her. Hard. But as Mac finally starts feeling accepted by Cooper and his friends, the secret he’s been keeping from her threatens the only place she’s ever felt at home.

'Good Girl Complex' is the new book and first in a contemporary romance series by author Elle Kennedy.

So this was solidly "fine."Elle Kennedy is a hybrid-author who had 42 of her early works 'traditionally published' before finding breakout success as an indie, self-published author with her New Adult 'Off-Campus' series that really blew up and led the charge for that new-wave of evolving NA and pushed it more solidly into a romance realm (VS. its original intention of being a "stepping stone" readership out of YA for ageing teen readers)With 'Good Girl Complex', Kennedy is back in the traditionally published fold with St. Martin's Griffin press; and from the plot to the book-cover, you can kinda tell that she's chasing this new-new wave of new adult gentler romances and kind of re-introducing herself to a whole new crop of readers who have been welcomed into the romance fold, but maybe haven't been as genre-cluey to go digging through the grassroots indie wave that helped to largely shape current trends - and which Kennedy was very much apart of. The illustrated-cover is very on-trend with Emily Henry, Lyssa Kay Adams, Abby Jimenez, Tessa Bailey, Talia Hibbert and so many more - and that's clearly the market Kennedy is ingratiating herself with here.And that also extends to the series set-up and first story overall. Rich girl attending stuffy university with requisite awful rich-boy boyfriend, journeys into the college town and through a rather convoluted back-story of revenge-dating, ends up getting cozy with the townie bad-boy from the wrong side of the tracks.It's very Anna Todd 'After', 'The Longest Ride' by Nicholas Sparks (which is also a more modern 'The Notebook' take) and even *gulp* 'Beautiful Disaster' by Jamie McGuire. It's a story that also feels very much in that mid-00s mix, like it could have come out alongside McGuire's in 2011 or Todd's in 2014 when that New Adult college-set romance was taking off ... because of course, Elle Kennedy *was* releasing books like this then too, with self-published title 'The Deal' coming out in 2015. That's why it feels like a rehash, for people familiar with Kennedy's work it feels like we're getting a slightly watered-down remix, more aimed at a new crop of romance readers. Except this series is a little more sanitised too, for the 'traditionally published' crowd. There's head-nods to more diverse and inclusive characters, but they're periphery at the moment - rather than an understanding that one of them could take the reins and headline their own instalment in this new series.Because 'Good Girl Complex' is indeed the first book in what will be a new contemporary series from Kennedy, 'Avalon Bay' - with second book 'Bad Girl Reputation' coming in October of this year and continuing to expand on the townie friendship group introduced in 'Complex'. Which is ... fine.It's all fine. It will no doubt be a crowd-pleaser for people looking for exactly this kind of story, maybe after the algorithm has sent them here by way of 'The Love Hypothesis' by Ali Hazelwood ... because it does read a bit like chasing the romance/BookTok trends. Which is again - fine. Commendable. Elle Kennedy is a damn good writer, and deserves more mainstream recognition and the way to do that is probably by writing a book directly aimed at mainstream audiences in the traditionally published romance realms.BUT. If you're a long-time fan of hers, then I can't say that this series looks to match 'Off-Campus' or 'Briar U' or the series by her friend and sometimes co-author, Sarina Bowen ('Ivy Years' is *amazing*). I hope that people like 'Good Girl Complex' enough to go through Kennedy's backlist and push those earlier series onto the BookTok algorithm too ... but for me, personally? Eh. It was all fine. Nothing to write home about. I'll see if the mood takes me to pick up Book 2.