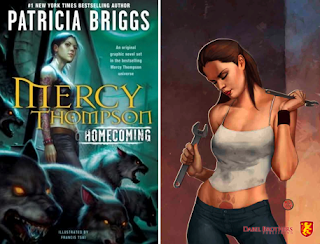 ‘Homecoming’ is a graphic novel short story set in the Mercy Thompson universe. The story is by Patricia Briggs and David Lawrence with illustrations by Francis Tsai and Amelia Woo, and cover art by Daniel Dos Santos.

‘Homecoming’ tells the story of how Mercy came to settle in the Tri-Cities. The graphic novel details her first meeting of Stefan, Siebold Adelbertsmiter (Zee) and his son Tad and the Columbia Basin wolf pack’s Alpha, Adam Hauptman.

Many of the Amazon reviewers thought that ‘Homecoming’ was the next novel in Patricia Briggs’ ‘Mercy Thompson’ series, and they bought/pre-ordered the novel thinking it was follow-on from the 4th Mercy book ‘Bone Crossed’. One indignant reviewer even accuses Dabel brothers of misleading fans by giving no indication on the cover that this is a graphic novel… that’s despite the fact that on the cover are the words “an original graphic novel”.
Diana Gabaldon is releasing a graphic novel short story set in the ‘Outlander’ universe, telling a new Jamie and Claire story set in the timeframe of her first book. Kelley Armstrong has an online comic called ‘Becoming’ which is a prologue to the events of her first ‘Women of the Otherworld’ book, ‘Bitten’. Melissa Marr has released a graphic novel set in her YA ‘Wicked Lovely’ universe, with a second graphic novel due for release next year. Laurell K Hamilton has had great success adapting her ‘Anita Blake’ series into comic book format with ‘The First Death’ (2007), ‘Guilty Pleasures’ (2008) and she is currently working on ‘The Laughing Corpse’ for release later this year.

Unfortunately Dos Santos only did the cover-art for ‘Homecoming’, Francis Tsai and Amelia Woo are responsible for the beautiful illustrations within. Daniel Dos Santos’s work is magnificent, but probably too detailed for the comic book format. Regardless, Tsai and Woo do a fantastic job of visualizing Zee, Stefan and especially Adam.

I loved ‘Homecoming’, but then again I am not prejudiced against comics like some Mercy fans seem to be. I loved the story, especially Stefan and Mercy’s meeting (and a certain picture of shirtless Adam – not since Trent from ‘Daria’ have I found an illustration so sexy). If you are a Mercy fan, check out ‘Homecoming’, it is a damn good GRAPHIC NOVEL.