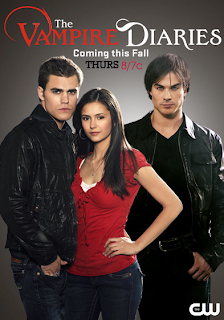 Elena Gilbert (Nina Dobrev) has had a rough year. She survived the car accident that killer her parents. Her younger brother has been self-medicating to combat his grief. Elena broke up with her boyfriend, Matt (Zach Roerig) and she is sick of being her High School’s golden girl. She returns to school with a smile on her face and no intention of being pitied by her classmates.
But Elena’s school year starts out a little rocky. Her best friend Bonnie (Katerina Graham) is convinced she is psychic. Her other (former) friend Caroline (Candica Accola) is convinced that she and Elena are competing for school supremacy. Matt is staring daggers in the hallway, but still pining for her. And then the new boy arrives. Tall, dark and decked out in designer Italian, Stefan Salvatore (Paul Wesley) has caught everyone’s eye… including Elena’s.

Meanwhile, there’s been a slew of animal attacks in the area – people have been turning up mauled, with peculiar bite marks on their necks.

Only Stefan knows the truth behind these attacks… because he is a vampire, and recognizes his brother’s handy work. Just as Stefan settles into his old hometown and starts cozying up to Elena, Stefan’s elder brother, Damon (Ian Somerhalder) turns up to cause trouble. Damon reads a lot more into Stefan’s interest in Elena, suspecting that his brother’s attraction stems from her appearance to a certain woman from the brother’s past…

This is the new drama from teen network the CW, based on the book series by L.J. Smith. The books were released in 1991, and their adaptation to the small screen is clearly the CW trying to capitalize on Stephenie Meyer’s ‘Twilight’ success. Vampires are not a new concept to the young adult genre, but ‘Vampire Diaries’ was clearly chosen because it bears the closest resemblance to ‘Twilight’.

The main male protagonist is a self-hating vampire who is ‘vegetarian’, trying to curb his predatory ways. There is also a chance for viewers to split into two camps when it comes to the love interests. There was Team Edward/Jacob, now there’s Team Stefan/Damon – it all depends on whether you like your men deep and broody or straight up bad-boy.
‘Vampire Diaries’ has also borrowed the narration technique used at the beginning of ‘Twilight’ – Elena reads from her diary, Stefan from his (deeply introspective, I’m sure).

It looks as though ‘Vampire Diaries’ is going to stick close to the book series it is based on, with a few important and much-needed character changes. In the books, Elena is a thoroughly annoying protagonist. She acts like a spoilt princess, but still manages to attract the attention of every male in a five-mile radius. In the books she is an active participant in the rivalry with Caroline, and hell-bent on remaining top of the pecking order. It’s her popularity competition with her ex-friend that sees Elena go in hot pursuit of Stefan. In the TV show Elena is just trying to cope with her recent tragedy, and her attraction to Stefan is a happy accident, one she isn’t entirely comfortable pursuing. Such minor changes make the character of Elena entirely more bearable than her book persona.

All in all, I was really underwhelmed by ‘Vampire Diaries’. Maybe I’m still sore with the CW for cancelling ‘Veronica Mars’, but I don’t intend to keep watching this latest vampire instalment.
I can appreciate ‘Vampire Diaries’ for what it is – a bid to profit from the current vampire palooza. I am sure ‘Team Edward’ tweens will appreciate ‘Vampire Diaries’ as a means of passing the months in between the latest ‘Twilight’ movie instalments. ‘Vampire Diaries’ is just thoroughly tween-orientated, complete with banal mainstream soundtrack (Katy Perry, The Fray). But you know what? One broody vampire is enough for me – Stefan is clearly a pale (ha!) imitation of Edward Cullen and I can’t really bare the thought of an entire season watching him yo-yo between wanting Elena and staying away from her for her own good. Ian Somerhalder has one scene in the pilot episode, but from that alone I can tell he will be the stand-out of the show (mostly because everyone loves a bad-boy, especially one who is on a path of redemption).
Nina Dobrev is pretty bland as Elena. She smiles a lot and is cute as pie. But there’s no real charisma and I suspect that for the most part, the writing will rely on Stefan and Elena having an intangible ‘connection’ that explains their bond.

At the end of the day it’s just a shame that this mediocre book series was chosen for adaptation based purely on the assumption that it’s similarity to a far more successful series will make it popular. There are so many better options for book to TV adaptations; Rachel Caine’s ‘Morganville Vampires’ or Richelle Mead’s ‘Vampire Academy’ come to mind. Both those series are about as far from ‘Twilight’ as you can get, with a far superior plot and interesting characters. Likewise, Meads ‘Vampire Academy’ and Caine’s ‘Morganville Vampires’ both have more longevity than ‘Vampire Diaries’. ‘Vampire Diaries’ was told in 4 books, and nothing much really happened plot-wise in those books. The story didn’t go beyond Elena’s small town and only 3 vampires were ever introduced. Whereas in Meads and Caine’s books there is extensive mythology, over-arching story and plenty of vampire characters.

‘Vampire Diaries’ is a poor man’s ‘Twilight’, if you are discerning in your vampire tastes, steer clear (or just watch ‘True Blood’, it’s WAY better).
1/5