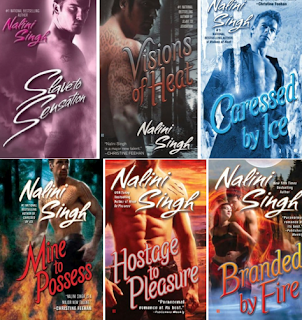 In the year 2079 there are three races co-existing on planet earth:

Changelings – part humans, part ‘other’ – able to change into animal form at will.

And Psy. In this alternate reality, Psy were a dying race that implemented ‘silence’ in order to stunt their emotions and increase their survival rates. In the 1970’s ‘silence’ was introduced and Psy have thought themselves above their human and changeling counterparts ever since.

So I finally succumbed.

The Psy storyline reminded me a little bit of the 2002 film starring Christian Bale; ‘Equilibrium’ (seriously, if you’re a fan of this series, check out that movie – great storyline, but more importantly it also has Christian Bale shirtless and buff… you’re welcome).

The Psy storyline works because it adds a layer of mystery to each new book as the DarkRiver pack continue to discover the various cracks and faults in the Psy system. Silence was originally supposed to only eradicate the emotion of rage, to curb violence. But because it was too difficult to pin down and dissolve only one emotion, ‘silence’ instead eradicated all feeling from the Psy race. Come to think of it, the Psy storyline also reminds me of Joss Whedon’s 2005 film ‘Serenity’….