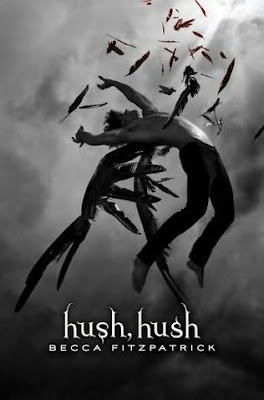 Nora Grey doesn’t have time for romance. She’s far too concerned with keeping her grade-A average, maintaining her organic foods diet and keeping her best friend, Vee, out of trouble. But then Patch comes along. The two are forced to be lab partners and Nora finds herself disconcertingly attracted to the mysterious new boy, with his black eyes and devilish grin.

The books prologue has a noblemen being confronted by an angel who mysteriously insists on meeting with the man every Cheshvan (the start of the Hebrew month). The Angel’s parting message to the nobleman is the information that he is a Nephilim, the product of a human/fallen Angel coupling. Intriguing, true – but after that tempting prologue there is no mention made of the Nephilim until more than halfway through the book. The biggest problem with ‘Hush Hush’ is the lack of supernatural storyline. It’s false advertising – the beautiful front cover has an image of an angel and the tag line ‘A fallen Angel… A forbidden love’.

It puts the reader in an odd position – the cover and tagline lets us know what supernatural characters are to appear, but we are forced to read Nora’s none-the-wiser POV. There’s no suspense for the reader, we know what to expect – angels – but we have to sit through Nora’s confusion and her amateur sleuthing into Patch’s past. And it is amateur – Nora’s big break in the mystery comes in the form of a Google search; she literally types ‘angel wing scars’ into the search engine. And what prompted her search into fallen angels? - a carnival ride called the ‘Archangel’. If that’s not a sledgehammer to reader’s intelligence, I don’t know what is.

Email ThisBlogThis!Share to TwitterShare to FacebookShare to Pinterest
Labels: Becca Fitzpatrick, YA