'Surrender of a Siren' by Tessa DARE 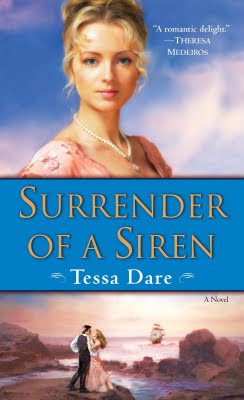 From the BLURB:
Desperate to escape a loveless marriage and society's constraints, pampered heiress Sophia Hathaway jilts her groom, packs up her paints and sketchbook, and assumes a new identity, posing as a governess to secure passage on the Aphrodite. She wants a life of her own: unsheltered, unconventional, uninhibited. But it's one thing to sketch her most wanton fantasies, and quite another to face the dangerously handsome libertine who would steal both her virtue and her gold.
To any well-bred lady, Benedict 'Gray' Grayson is trouble in snug-fitting boots. A conscienceless scoundrel who sails the seas for pleasure and profit, Gray lives for conquest-until Sophia's perception and artistry stir his heart. Suddenly he'll brave sharks, fire, storm, and sea just to keep her at his side. She's beautiful, refined, and ripe for seduction. Could this counterfeit governess be a rogue's redemption? Or will the runaway heiress's secrets destroy their only chance at love?
I have to admit I went into ‘Surrender of a Siren’ with very high expectations. I absolutely loved Tessa Dare’s debut romance, ‘Goddess of the Hunt’ – and therefore began reading her second novel with unmitigated enthusiasm, but ended up a little bit disappointed. It’s hard to pinpoint why I didn’t really like ‘Surrender’ without drawing comparisons to ‘Goddess’. Maybe it’s not fair to judge a book on its predecessor, but it couldn’t be helped.
One of the things I liked about ‘Goddess of the Hunt’ was its straightforwardness. It was a fairly simple romance, with a few emotional twists and turns for the female protagonist. In ‘Surrender of a Siren’ there’s a bit more at stake. For one thing, Sophia is travelling abroad under a false name and occupation – Miss. Jane Turner, governess. So from the get-go there’s a false identity to eventually be cleared up. Hazards of the sea mean there are also several spikes in the plot; including a shark attack, lightning strike and attempted mutiny. Such peaks in plot made for a lot of action, which was a stark contrast to the rather more sedate ‘Goddess of the Hunt’, which focussed solely on Lucy’s romantic conquest.
I also didn’t particularly like the leading man, Benedict “Gray” Grayson. He was a little bit too smooth, to the point of being even a little bit sleazy. And actually, I found his brother far more interesting. Gray is the Aphrodite’s owner, but his half-brother Joss is the ships’ captain. Joss had a fascinating background – he and Gray share the same father, but Joss’s mother was a black slave. The boys were raised together, but separated when Gray was sent to London for University. Dare made Joss into a real enigma – when we meet him Gray divulges very little information about his little brother, beyond saying he his still grieving for his wife, Mara, who died last year. Joss and Gray look very similar, except for Joss’s cocoa-coloured skin. I would love it if Tessa Dare wrote a book for Joss, because even though he has very few scenes his background was thoroughly intriguing. But it doesn’t bode well when I would rather read about the leading man’s brother than the leading man himself.
One of my favourite things about ‘Goddess’ was leading lady, Lucy. She was a clumsy, naïve, witty tomboy and a delight to read. Sophia is very different from Lucy - she’s a bit of a walking contradiction; a sensuous lady, novice temptress and above all else, a dreamer;
She’d been escaping for years now, thought clever lies and wicked fantasies. Surely Sophia was the only girl at school who kept a secret folio of naughty sketches buried beneath the obligatory watercolor landscapes. The only debutante at Almack’s who mentally undressed unsuspecting gentlemen between dainty sips of ratafia. Surely none of the other young ladies in the Champion of Charities Junior Auxiliary lay abed at night with their shifts hiked to their waists, dreaming of pirates and highwaymen with coarse manners and rough, skilful hands.
Sophia is determined to follow her passions, and on the one hand I really admired her courage. But she spends half the novel berating herself for her wicked thoughts, selfish actions and unladylike behaviour. In the end I got a little bit sick of hearing all of the contradictory shameful thoughts regarding herself.
Measuring ‘Surrender’ against ‘Goddess’ makes for harsh reviewing. ‘Surrender’ isn’t bad; it’s just not as good as ‘Goddess’. There are plenty of redeemable features in the book; Tessa Dare writes wonderfully sensuous love scenes, for instance, and her secondary characters are lively and compelling. I did like ‘Surrender’, I just didn’t love it and I was expecting a bit more than I got.
2.5/5
Posted by Danielle at 9:07 PM